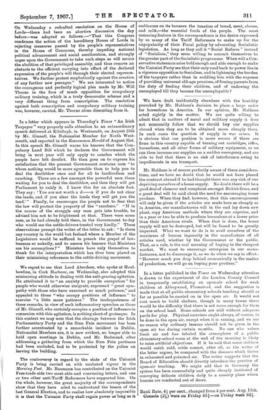 We regret to see that Lord Aberdeen, who spoke at

Haul. bowline, in Cork Harbour, on Wednesday, also adopted this minimising attitude in dealing with the anti-grazing agitation. He attributed it to "an anxiety to provide occupation" for people who would otherwise emigrate, expressed "great sym- pathy with those who have exercised so much patience," and appealed to those "who occupy positions of influence" to exercise "a little more patience." The inadequateness of these remarks, in view of such inflammatory speeches as those of Mr. Ginnell, who certainly occupies a position of influence in connexion with this agitation, is nothing short of grotesque. In this context we may note that the cleavage between the Irish Parliamentary Party and the Sinn Fein movement has been further accentuated by a remarkable incident in Dublin. Nationalist Members are, it is now evident, no longer able to hold open meetings in Dublin, and Mr. Redmond, after addressing a gathering from which the Sinn Fein partisans had been excluded, had to be protected by the police on leaving the building.