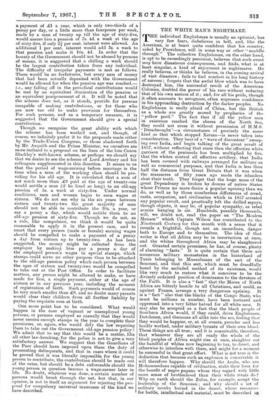 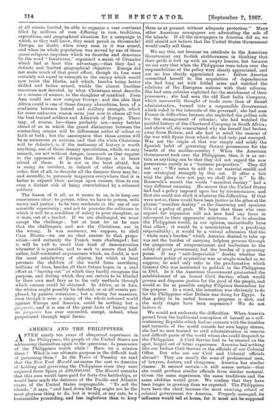 THE WHITE MAN'S NIGHTMARE. T HE individual Englishman is usually an

optimist, has very few fears, disbelieves in hell, and, like the American, is at heart quite confident that his country, aided by Providence, will in some way or other "muddle through. ' The collective Englishman, on the other hand, is apt to be exceedingly pessimist, believes that each event may have disastrous consequences, and finds, what is at least singular, a kind of enjoyment in nightmares. Ho really believes, or thinks he believes, in the coming arrival of vast disasters ; fails to find comfort in his long history of su'ccess"; forgets that the awful blow which was to have destroyed him, the successful revolt of the American Colonies, doubled the power of his race without reducing that of his own section of it ; and, for all his pride, though it often amounts to arrogance, often expresses confidence in his approaching destruction by the darker peoples. No Englishman is really afraid of China, but the British as a whole are greatly moved by prophecies of the "yellow peril." The fact that if all the yellow men in existence reached the shores of the North Sea, they could not cross it without permission of H.M.S.

Dreadnought '—a circumstance of precisely the same kind as that which stopped Xerxes—is never taken into consideration. They hear of a " wave of discontent " sweep- ing over India, and begin taking of the great revolt of 1857, without reflecting that since then the effective white garrison of the peninsula has been multiplied by five, that the whites control all effective artillery, that India has been covered with railways arranged for military as well as commercial purposes, and that India is less than half the distance from Great Britain that it was when the massacres of fifty years ago made the islanders shut their teeth. They forget that the huge mass of the great Dependency is broken by dozens of native States whose Princes no more desire a popular uprising than we do, as well as by those numberless differences of creed, caste, occupation, and civilisation which in 1857 arrested any popular revolt, and practically left the drilled sepoys, though objects, it may be, of popular sympathy, as rebel armies hanging in air. Hundreds, possibly thousands, will, we doubt not, read the paper on "The Moslem Menace" which Captain Wilson has contributed to the Nineteenth Century for this month with a sense that it reveals a frightful, though not an immediate, danger both to Europe and to themselves. The idea of that writer is that all Africa may be in insurrection at once, and the whites throughout Africa may be slaughtered out. Granted certain premisses, he has, of course, plenty of alarming "facts." It is quite certain that there are numerous military monasteries in the hinterland of Tunis belonging to Mussulmans of the sect of the Senoussi, and that this sect, which must be dreadfully bored by the secluded method of its existence, would like very much to restore what it conceives to be the divinely ordained position of dominance to the devotees of the Faith. It is also a "fact" that the Moors of North Africa are bitterly hostile to all Christians, and could, as against France, arrange a. very dangerous uprising. It is a " fact " also that the blacks of the Congo State, who must be millions in number, have been tortured and oppressed into a very bitter hatred for all white men. It may also be accepted as a fact that the black people of Southern Africa would, if they could, drive Englishmen, Dutchmen, and Germans all alike into the sea, feeling that they would be happier, or, at all events, prouder and less hardly worked, uuder military tyrants of their own blood. These things are all true; and it is conceivable, therefore, that whenever they are all ready the whole of the black peoples of Africa might rise at once, slaughter out the handful of whites now beginning to tax, to direct, and otherwise to interfere with them, and might for a moment be successful in that great effort. 'What is not true is the deduction that because such an explosion is conceivable it will therefore happen. Why should the Arabs, who are Mohammedans capable of civilisation, stake their lives for the benefit of negro pagans whom they regard with little more sense of brotherhood than their white rivals do ? Why on earth should the Zulus, for example, accept the leadership of the Senoussi ; and why should a set of military monks buried in the desert, whose resources for battle, intellectual and material, must be described as at all events limited, be able to organise a vast continent filled by millions of men differing in race, traditions, aspirations, and geographical situation for a campaign in which, as they well know, they must perish in thousands? Europe, no doubt, when every man in it was armed, and when its whole population was moved by one of those quasi-religious impulses which we describe and denounce by the word "fanaticism," organised a series of Crusades which had at least this advantage,—that they had a definite and limited geographical objective. Europe did not make much of that great effort, though its foes were certainly not equal in strength to the enemy which would now resist the blacks, and which, besides being better drilled and better armed, wields the almost limitless resources now devoted, by what Christians must describe as a misuse of science, to the slaughter of mankind. Even Asia could not now conquer Europe ; and the idea that Africa could is one of those dreamy absurdities, born of a confusion between hatred and military strength, which for some unknown reason seem just now to obsess all but the best trained soldiers and Admirals of Europe. There may, of course, be—there probably are—many battles ahead of us in which the grand distinction between the contending armies will be differences either of colour or faith or both ; but the assumption that those armies will be as numerous as nations, and that the white Christians will be defeated, is, if the testimony of history is worth anything, one of those dreamy speculations, which, we may remark, are not without danger, inasmuch as they suggest to the opponents of Europe that Europe is at heart afraid of them. It is not in the least afraid, but is using its intellect, in default of other objects, in order, first of all, to describe all the dangers there may be ; and secondly, to persuade taxpayers everywhere that it is better to expend their savings upon cannon than to run even a distant risk of being overwhelmed by a coloured soldiery.

The lesson of it all, as it seems to us, is to keep our consciences clear ; to govern, when we have to govern, with mercy and justice ; to be very moderate in the use of our scientific superiority ; and not to provoke the collisions in which it will be a condition of safety to pour slaughter, as it were, out of a bucket. If we are challenged, we must accept the challenge ; but at least let us be sure that the challengers, and not the Christians, are in the wrong. It was necessary, we suppose, to shell Casa Blanca—we see no clear answer to that propo- sition—and certainly the French were challenged ; but it will be well to avoid that kind of demonstration whenever it is possible, and to seek to secure that half- sullen, half-contented acquiescence which, no doubt, is not the most satisfactory of objects, but which at least prevents the children of the world from sacrificing millions of lives, besides all their future hopes, in a mad effort at "barring out" of which they hardly recognise the purpose, and during which they are certain to be blinded by their own mad fury as to the only methods through which success could be obtained. In Africa, as in Asia, the whites might possibly be defeated, or at all events per- plexed, by passive resistance ; but a rising for massacre, even though it were a rising of the whole coloured world against Europe and America, could be nothing but a jacquerie, and it is one of the great facts of history that no jacquerie has ever succeeded, except, indeed, when perpetrated through legal forms.