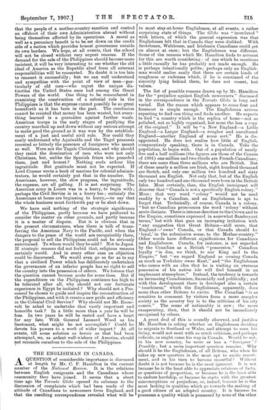 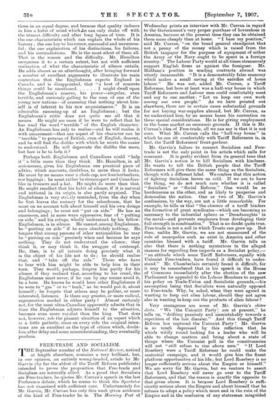 THE ENGLISHMAN IN CANADA.

AQUESTION of considerable importance is discussed at length by Mr. C. F. Hamilton in the current number of the National Review. It is the relations between English emigrants and the Canadians whose community they have joined. It seems that a short time ago the Toronto Globe opened its columns to the discussion of complaints which had been made of the attitude of Canadians to newcomers from England, and that the resulting correspondence revealed what will be to most stay-at-home Englishmen, at all events, a rather surprising state of things. .The Globe was " inundated " with letters, of which the general expression was that Englishmen felt that in Canada they were disliked. With Scotchmen, Welshmen, and Irishmen Canadians could get on almost at once ; but the Englishman was different. Some of the reasons which Mr. Hamilton finds to account for this are worth considering : of one which he mentions a little casually he has probably not made enough. He is perhaps intentionally polite ; perhaps only an English- man would realise easily that there are certain kinds of roughness or rudeness which, if he is convinced of the sincerity lying behind them, he does not resent, but values.

The list of possible reasons drawn up by Mr. Hamilton for the "prejudice against English newcomers" discussed in the correspondence in the Toronto Globe is long and varied. But the reason which appears to come first and foremost is simple enough. The Englishman arrives expecting to find one thing and finds another. He expects to find "a country which is the replica of home—not so polished, not so highly organised, but none the less a, copy of the original." It will be "a New England—a Little England—a Larger England—a rougher and uncultured England—another England of some sort." He is dis- appointed. He does not realise how little of English, comparatively speaking, there is in Canada. Take the population, to begin with. Out of a population of nearly five and a half millions (the figures are those of the Census of 1901) one million and two-thirds are French-Canadians; there are more than three millions who are British. But of these nearly a million are Irish, eight hundred thousand are Scotch, and only one million two hundred and sixty thousand are English. Not only that, but of the English only two hundred and one thousand were born in the British Isles. Most certainly, then, the English immigrant will discover that "Canada is not a specifically English colony." More ; that very word " colony " would not be used readily by a Canadian, and an Englishman is apt to forget that. Technically, of course, Canada is a colony, "but no Canadian pronounces the word 'colony' without acute distaste. There is intense devotion to the Crown and to the Empire, sometimes expressed in somewhat flamboyant terms," but with that goes an increasing irritation with "any suggestion that Great Britain—still more, that England= owns' Canada, or that Canada should be loyal,' in the submissive sense, to the Mother-country." Other words have different significations for Canadians and Englishmen. Canada, for instance, is not regarded by the Canadian as a British "possession." Canadian loyalty "is due, we think, to our King and to the Empire," but "we regard England as owning Canada as much as Yorkshire owns Kent," and "the Englishman who comes with an idea that be is visiting an overseas possession of his native isle will find himself in an unpleasant atmosphere." Instead, the tendency is towards an increasing Canadianism, financially and politically ; and with this development there is developed also a certain "touchiness," which the Englishman, apparently, does more than other Britons to excite. The Canadian "is as sensitive to comment by visitors from a more complex society as the country boy is to the criticism of his city cousin." The sense of nationality is new ; the more exasperating, then, that it should not be immediately recognised by others.

A great deal of this is soundly observed, and justifies Mr. Hamilton in asking whether an Englishman deciding to migrate to Scotland or Wales, and attempt to earn his living, would not meet with as much criticism, and perhaps ridicule, as might come his way in Canada. Would he not, in his new country, be more or less a " foreigner " Possibly ; but a more important question remains. Why should it be the Englishman, of all Britons, who when he takes up new quarters is the most apt to excite resent- ment, and in his turn to become resentful ? Without doubt it is not because he is the most ignorant. It is not because he is the least able to appreciate relations of facts, or questions of proportion, or because he is the least able to endure hardship, or because he starts with the greatest

misconceptions or prejudices, or, indeed, because he is the most lacking in qualities which go towards the making of a good citizen of an adopted country. It is because he possesses a quality which is possessed by none of the other

three in an equal degree, and because that quality induces in him a habit of mind whichahe can only shake off with the utmost difficulty and after long lapses of time. It is the one characteristic which can explain the whole of his history ; the one key to his career, successful and unsuccess- ful ; the one explanation of his distinctions, his failures, and his contradictions. He is the most silent of them all. That is the reason and the difficulty. Mr. Hamilton recognises it to a certain extent, but not with sufficient realisation of what the characteristic of silence entails. He adds almost as an afterthought, after bringing forward a number of excellent arguments to illustrate his main contention that the Englishman expects England in Canada, and is disappointed, that "a host of concrete things could be mentioned I might dwell upon the Englishman's reserve, his power—singular, even terrible, and curiously galling to the man of one of the young new nations—of assuming that nothing about him- self is of interest to his new acquaintances." It is an admirable summing-up of an Englishman ; but the Englishman's critic does not quite see all that it means. He might see more if he were to reflect that he has used the word " terrible " of the English character. An Englishman has only to realise—and he will realise it with amazement—that any aspect of his character can be " terrible " to persons of British, even of English, descent, and lie will find the dislike with which he meets the easier to understand. He will deprecate the dislike the more, but how is he to help it ?

Perhaps both Englishmen and Canadians could "help it" a little more than they think. Mr. Hamilton, in all seriousness, gives his Englishman. one practical piece of advice, which amounts, doubtless, to more than it looks. He must by no means wear a cloth cap, nor knickerbockers, nor leggings ; he must rather be circumspect and Canadian-. like in trousers and a hat. He might do more than that. He might recollect that his habit of silence, if it is natural and national in its origin, is also partly acquired. The Englishman is very strialy reminded, from the day when he first leaves the nursery for the schoolroom, that he must on no account talk about himself and his own doings and belongings ; he must not "put on side." He has an enormous, and in some ways oppressive, fear of "putting on side," and his refuge, wholly understood by his fellow- Englishmen, is in silence. He cannot, among Englishmen, be "putting on side" if he says absolutely nothing. He forgets that among persons of other nationalities he may be "putting on side" precisely when and because he says nothing. They do not understand the silence ; they think it, or may think it, the swagger of contempt. He, then, is to all intents doing precisely what it is the object of his life not to do ; lie should realise that, and "take off the side." Those who have to bear with him might be able to help him in their turn. They would, perhaps, forgive him partly for his silence if they realised that, according to his creed, the Englishman must never, if he can by any means avoid it, be a bore. He knows he would. bore other Englishmen if he were to " gas " or to "buck," as he would put it, about himself ; he forgets that others may be politer, or more interested, listeners. Is there any greater, or more radical, regeneration needed in either party ? Almost certainly not, for the most ultra-Canadian apparently admits that in time the Englishman adjusts himself to the situation, becomes even more 'royalist than the king. That does not, however, rob the present situation of an aspect which is a little pathetic, since on every side the original inten- tions are as excellent as the type of citizen which, doubt- less after delay and some misunderstanding, they eventually produce.