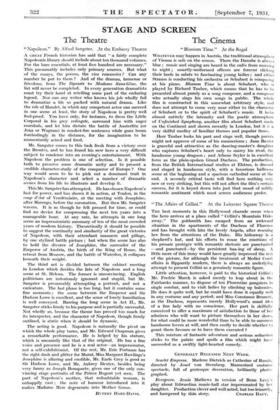 "Napoleon." By Alfred Sangster. At the Embassy Theatre A GREAT French historian has said that "a fairly complete Napoleonic library should include about ten thousand volumes.

For the bare essentials, at least five hundred are necessary."

This presumably includes only primary sources. But what of the essays, the poems, the vies romancees? Can any

number be put to them ? And of the dramas, immense or

frivolous, from The Dynasts to Madame Sans-Gins, the list will never be completed. In every generation dramatists

must try their hand at retelling some part of the enduring legend. Nor can any writer who knows his job wholly fail to dramatize a life so packed with natural drama. Like

the role of Hamlet, in which any competent actor can succeed

in one scene at least, the story of Napoleon is pretty well fool-proof. You have only, for instance, to dress the Little

Corporal in his grey redingote, surround him with eager marshals, and let him dictate the battle of Austerlitz (or Jena or Wagram) in musket-fire sentences while guns boom forebodingly in the distance, for the imagination to be momentarily seized and fired.

Mr. Sangster comes to this task fresh from a victory over the Brontes, and he has found his new hero a very difficult subject to condense into an evening's entertainment. With Napoleon the problem is one of selection. Is it possible both to preserve some dramatic unity and to present a credible character-study of the conqueror of Europe ? One way would seem to be to pick out a dominant trait in Napoleon's character and select a number of dramatic scenes from his life to illustrate and develop it.

This Mr. Sangster has attempted. He has chosen Napoleon's lust for power, and has shown it in action, at Toulon, in the

coup d'état of Vendemiaire, at the meeting with Josephine,

after Marengo, before the coronation. But then Mr. Sangster wavers. It is as though he felt pressed for time, or could find no device for compressing the next ten years into a manageable hour. At any rate, he attempts in one long scene an impressionistic summary of ten of the most crowded years of modern history. Theoretically it should be possible to suggest the continuity and similarity of the great victories of Napoleon, with their attendant massacre and pillage, by one stylized battle picture ; but when the scene has also to hold the divorce of Josephine, the surrender of the Emperor of Austria, the birth of the King of Rome, the retreat from Moscow, and the battle of Waterloo, it collapses beneath their weight.

The third act is divided between the cabinet meeting in London which decides the fate of Napoleon and a long scene at St. Helena. The former is unconvincing. English politicians are notoriously ignorant and stupid, but Mr. Sangster is presumably attempting a portrait, and not a caricature. The last phase is too long, but it contains some fine moments ; the scene between the Emperor and Sir Hudson Lowe is excellent, and the sense of lonely humiliation is well conveyed. Barring the long scene in Act II., Mr. Sangster sticks firmly to his purpose and is partially successful. Not wholly so, because the theme has proved too much for its interpreter, and the character of Napoleon, though firmly outlined, is static when it should be dynamic.

The acting is good. Napoleon is naturally the pivot on which the whole play turns, and Mr. Edward Chapman gives a remarkable performance. He is helped by his stature, which is uncannily like that of the original. He has a fine voice and presence and he is a real actor—an impersonator, not a self-exhibitionist. Of the rest, Mr. Eric Portman has the right dash and glitter for Murat, Miss Margaret Rawlings's Josephine is alluring and credible, Mr. Earle Grey is good as Sir Hudson Lowe, and Mr. Aubrey Dexter, besides being very funny as Joseph Bonaparte, gives one of the only con- vincing stage portraits of the Prince Regent yet seen. The part of Napoleon's mother, that redoubtable woman, is unhappily cast ; the note of humour introduced into it Makes Madame Mere degenerate -into Mother Goose.