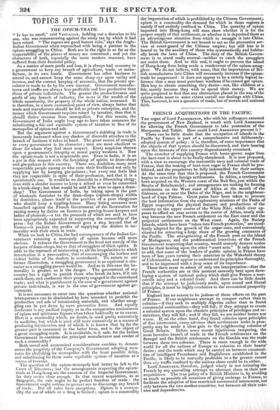 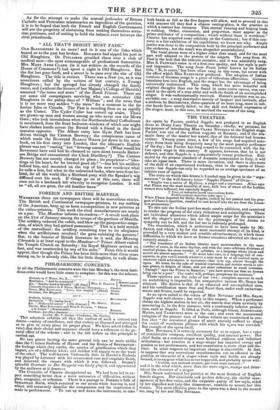 FRENCH ACQUISITIONS IN THE PACIFIC.

THE organ of Lord PALMERSTON, who with his colleagues assumed the government of New Zealand, is wroth with Lord ABERDEEN for allowing the French Government to take possession of the Marquesas and Tahiti. How could Lord ABERDEEN prevent it ?

There can be little doubt that the occupation of islands in the Pacific by France is part of a comprehensive and deliberately- adopted system of policy : it is, therefore, of some importance that the objects of that system should be discovered, and their bearing upon the interests of this country dispassionately examined.

The crotchet of supplying France with home-grown sugar from the beet-root is about to be finally abandoned. It is now proposed, with a view to encourage the mercantile navy and colonial trade of France, that the making of beet-root sugar in France shall be pro- hibited, and the proprietors be fully indemnified for their outlays. At the same time that this is proposed, the French Government begins to extend its foreign settlements. In Africa, a territory has been acquired on the Western coast of the Red Sea, just within the Straits of Babelmandel ; and arrangements are making for forming settlements on the West coast of Africa at the mouth of the Gahoons, on or near the Delta of the Niger, and in the neighbour- hood of Cape Palmas. Great pains have been taken to procure • the best information from the exploratory missions of the Pasha of Egypt respecting the physical features and productions of the country on the upper course of the White Nile; which river ap- pears to afford an easy access to the centre of Africa, nearly mid- way between the new French settlement on the East coast and the projected settlements on the West coast. Again, the Society Islands, which have been "taken into French protection," areexcel- lently adapted for the growth of the sugar-cane, and conveniently situated for attracting a large share of the growing commerce of the Pacific. The strengthening of the French post on the island of Madagascar, and the problematical intentions of the French Government respecting that country, would scarcely deserve notice but for their bearing upon the other "overt acts." It only remains to add, that some of the leaders of public opinion in France have been of late years turning their attention to the Wakefield theory of Colonization, and appear to understand its principles thoroughly, and to be impressed with a deep sense of its importance. These facts seem to admit of only one interpretation—that the French authorities are at this moment earnestly bent upon deve- loping a system of national policy which shall give France a mer- cantile navy and a colonial trade. And there can be little doubt that if the attempt be judiciously made, upon sound and liberal principles, it must be highly conducive to the economical prosperity of France.

England has no reason to be jealous of these efforts on the part of France. If our neighbours attempt to conquer rather than to colonize—if they seek to multiply Algerias rather than to found commercial communities—they will fail; if they attempt to create a colonial system upon the obsolete principles of privileges and re- strictions, they will fail ; and if they fail, we are neither better nor worse. If, on the other hand, they found colonies upon principles of free intercourse, every advance their settlements make in pros- perity may be made a clear gain to the neighbouring colomes-of Great Britain. Before some recent injudicious tampering, the most lucrative branch of trade in the French settlements on the Senegal and the British settlements on the Gambia was the trade between these two colonies. There is room enough in the wide world for all the nations of Europe to colonize to their hearts desire; and the trade which may be carried on between communi- ties of intelligent Frenchmen and Englishmen established in the Pacific, is likely to be mutually profitable to a far greater extent than any traffic confined to the natives alone could be to either. Lord ABERDEEN, therefore, judged wisely in not irritating the French by any unavailing attempt to obstruct them in their new acquisitions. The true policy of a British Minister is, by avoiding as much as possible all occasions of giving umbrage to France, to facilitate the adoption of less restricted commercial intercourse, not only between the two mother-countries, but between all their colo- nies and dependencies.

As for the attempt to make the mutual jealousies of Roman Catholic and Protestant missionaries an ingredient of the question, it is to be hoped that both the French and English Governments will see the propriety of abstaining from making themselves secta- rian partisans, and of uniting to hold the balance even between the rival priesthoods.