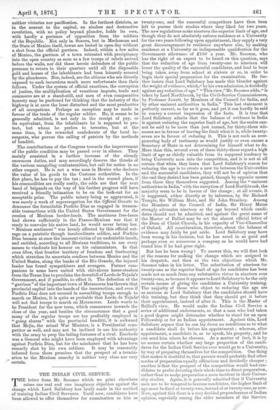 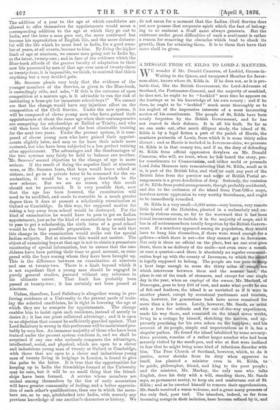 TBEE letter from Mr. Scoones which we print elsewhere raises one real and one imaginary objection against the change which Lord Salisbury has lately made in the method of training Indian Civil Servants. Until now, candidates have been allowed to offer themselves for examination as late as

twenty-one, and the successful competitors have then been left to pursue their studies where they liked for two years. The new regulations make nineteen the superior limit of age, and though they do not absolutely enforce residence at a University for the two years following upon appointment, they supply a very great discouragement to residence anywhere else, by making residence at a University an indispensable qualification for the Government allowance of £150 a year. Mr. Scoones, who has the right of an expert to be heard on this question, says that the reduction of age from twenty-one to nineteen will lower the quality of the successful candidates, and lead to boys being taken away from school at sixteen or so, in order to begin their special preparation for the examination. He fur- ther insists that Lord Salisbury has made this blunder against the weight of evidence, which," by his own admission, is decidedly against any reduction of age." "This view," Mr. Scoones adds," is taken by Lord Northbrook, by the Civil-Service Commissioners, by Professor Jowett, by Members of the Council for India, and by other eminent authorities in India." This last statement is perfectly correct, so far as it goes, and yet it can hardly be said to convey a correct impression of the facts. It is true that Lord Salisbury admits that the balance of evidence in India is against reducing the superior limit of age, but the scales can- not be said to be more than just turned, for thirty-three wit- nesses are in favour of leaving the limit what it is, while twenty- seven are in favour of reducing it. This is not such an over- powering body of testimony as would justify or even excuse a Secretary of State in not determining for himself what to do. More than this, several even of these thirty-three regard a high limit of age as chiefly valuable from its supposed tendency to bring University men into the competition, and it is not at all certain that when they learn that Lord Salisbury's reason for reducing the age is to create a new tie between the Universities and the successful candidates, they will not be of opinion that the end they desired has been gained, though by opposite means from those they themselves suggested. Among the "eminent authorities in India," with the exception of Lord Northbrook, the majority seem to be in favour of the change ; at all events, it is suggested, either directly or by inference, by Sir Richard Temple, Sir William Muir, and Sir John Strachey. Among the Members of the Council of India, Sir Henry Maine strongly advocates nineteen as the age beyond which candi- dates should not be admitted, and against the great name of the Master of BaBiol may be set the almost official letter of the Dean of Christ Church, in his capacity of Vice-Chancellor of Oxford. All consideration, therefore, about the balance of evidence may fairly be put aside. Lord Salisbury may have been wrong in his decision, but he has erred in as good and perhaps even as numerous a company as he would have had round him if he had gone right.

But has he been wrong ? To answer this, we will first look at the reasons for making the change which are assigned in his despatch, and then at the two objections which Mr. Scoones takes in his letter. The substitution of nineteen for twenty-one as the superior limit of age for candidates has been made not so much from any substantive virtue in nineteen over twenty-one, as because it appears to Lord Salisbury to be the only certain means of giving the candidates a University training. The majority of those who object to reducing the age are as anxious as Lord Salisbury that the candidates should have this training, but they think that they should get it before their appointment, instead of after it. This is the Master of Balliol's view. He would make the Indian Civil Service a series of additional endowments, so that a man who had taken a good degree might determine whether to stand for an open Fellowship or for an Indian appointment. Against this, Lord Salisbury argues that he can lay down no 'conditions as to what a candidate shall do before his appointment ; whereas, after appointment, a candidate is, so to speak, his property, and he can send him where he chooses. As a matter of fact, it is by no means certain whether any large proportion of the candi- dates for the Indian Civil Service ever would go to a University, by way of preparing themselves for the competition. One thing that makes it doubtful is, that parents would probably find other modes of preparation equally efficacious and decidedly cheaper ; another is that the prospect of the competition would lead can- didates to prefer devoting their whole time to direct preparation, rather than to make preparation a mere incident in their Univer- sity studies. Again, it is generally admitted that if University men are to be tempted to become candidates, the higher limit of age must. be fixed at twenty-two, instead of at twenty-one, as now. Now, against this there is a very decided preponderance of Indian opinion, especially among the older members of the Service.. The addition of a year to the age at which candidates are allowed to offer themselves for appointments would mean a corresponding addition to the age at which they go out to India, and the later a man goes out, the more confirmed has become his appreciation of English life, and the more distaste- ful will the life which he must lead in India, for a good num- ber of years, at all events, become to him. By fixing the higher limit of age at nineteen, we ensure men going out to India by, at the latest, twenty-one ; and in face of the evidence which the Blue-book affords of the greater faculty of adaptation to their • new life possessed by men of that age over men of twenty-three or twenty-four, it is impossible, we think, to contend that this is anything but a very decided gain.

Mr. Scoones pleads very truly that the evidence of the younger members of the Service, as given in the Blue-book, is exceedingly able, and asks, "If this is the outcome of open competition at a mature age, is it advisable to run the risk of instituting a bran-pie for immature school-boys ?" We cannot see that the change would have any injurious effect on the composition of the Civil Service. Under the new system, it will be composed of clever young men who have gained their appointments at about the same age when their contemporaries are competing for scholarships at Balliol or Trinity, and who - will then have the advantage of the best obtainable training for the next two years. Under the present system, it is com- posed of clever young men who have gained their appoint- ments slightly later, and may so far have their minds more • matured, but who have been subjected to a less perfect training after appointment. The advantages and the disadvantages of the two systems may fairly be held to balance one another. Scoones' second objection to the change of age is more serious. If the result of fixing the superior limit at nineteen were, as Mr. &manes fears, that boys would leave school at sixteen, and go ho a private tutor to be crammed for the ex- amination, it would be a very grave drawback to the new scheme. But we see no reason why this result should not be prevented. It is very possible that, now that the age has been lowered, the examination will need to be modified, and made to resemble in a much greater degree than it does at present a scholarship examination at Oxford or Cambridge. In this way, the supposed motive for taking a boy away from school would be destroyed. For the kind of examination he would have to pass to get an Indian appointment, just as for the kind of examination he would have to pass to get a scholarship, the sixth form of a good school would be the -best possible preparation. It may be said that this change in the examination would strike out the special Indian subjects. But at nineteen this would not matter. The object of examining boys at that age is not to obtain a premature smattering of special information, but to ensure that the can- didates have been putting their time to good account, as com- pared with the boys among whom they have been brought up. This is the difference between an examination at nineteen and one at twenty-two. There is a limit beyond which it is not expedient that a young man should be engaged in purely general studies, pursued without any reference to his ultimate career. That limit has probably been passed at twenty-two ; it has certainly not been passed at nineteen.

Unless, therefore, Lord Salisbury is altogether wrong in pre- ferring residence at a University to the present mode of train- ing the selected candidates, he is right in lowering the age at which they are to compete for appointments. The change enables him to insist upon such residence, instead of merely to desire it ; it has one great collateral advantage ; and it is open to no objection that cannot be sufficiently guarded against. That Lord Salisbury is wrong in this preference will be maintained pro- bably by veryiew. An immense majority of those who have been trained under the present system condemn it, and we shall be surprised if any one who seriously compares the advantages, intellectual, social, and physical, which are open to a clever and industrious young man of twenty at Oxford or Cambridge, with those that are open to a clever and industrious young man of twenty living in lodgings in London, is found to give the palm to the latter. It is true that the opportunities for keeping up in India the friendships formed at the University may be rare, but it will be no small thing that the friend- ships have been formed. A service whose members are united among themselves by the ties of early association will have greater community of feeling, and a better apprecia- tion of each other's qualifications, than one in which the mem- bers are. so to say, pitchforked into India, with scarcely any previous knowledge of one another's characters or history. We

do not mean for a moment that the Indian Men -Service does not now possess that corporate spirit which the fact of -belong- ing to so eminent a Staff must always generate. But the existence under great difficulties of such a sentiment is rather a reason for removing the obstacles which tend to check its growth, than for retaining them. It is to them that have that more shall be given.