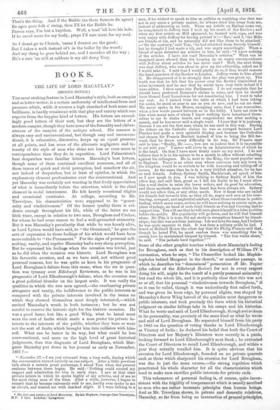 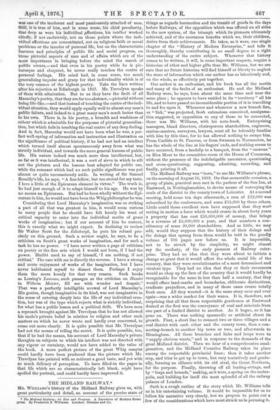 THE LIFE OF LORD MACAULAY.*

(fillOOND NOTICE.] THE most striking feature in Lord Macaulay's style, both as essayist and as letter-writer, is a certain uniformity of intellectual form and pressure which, while it secures a high standard of both sense and brilliance, is hardly consistent with that play and variety which one expects from the happier kind of letters. His letters are exceed- ingly good letters of their sort, but they are the letters of a

modern essayist, though they have none of the formality and elabor- ateness of the essayist of the antique schooL His manner is always easy and unconventional, but though easy and unconven- tional, it is exhaustive, discursive, keeps up an equal pressure at all points, and has none of the alternate negligence and in- tensity of the style of men who shine not less or even more in correspondence than they do in exposition. Lord Palmerston's best despatches were familiar letters. Macaulay's best letters, though some of them contained excellent nonsense, and all of them traces of quick and vivid perception, had somehow the air, not indeed of despatches, but at least of epistles, in which the explanatory element predominates over the conversational. And yet Macaulay was certainly not wanting in that lively appreciation of what is immediately before the attention, which is the chief element in social intercourse. He felt keenly occasional slights and occasional courtesies. At college, according to Mr.

Trevelyan, his characteristics were supposed to be "gener- osity and vindictiveness." Of the former quality there is evi- dence enough throughout his life, while of the latter we see little trace, except in relation to two men, Brougham and Croker, for whom he had some reason to feel a well-grounded animosity.

But it was Macaulay's peculiarity that while he was keenly alive, as Lord Lytton would have said, to "the Occasional," he gave the sort of expression to these feelings of his which would have been more suitable to "the Permanent." For the signs of personal self- seeking, vanity, and caprice Macaulay had a very sharp perception. But he expressed his feelings when the occasion was trivial, just

as he did when the occasion was historic. Lord Brougham wag his favourite aversion, and as we have said, not without good personal reasons, but he was quite as keen in his prognostic of Lord Brougham's failure from this cause, when the sin in ques- tion was tyranny over Edinburgh Reviewers, as he was in his prognostic of Lord Ellenborough's failure, when the occasion was a great political blunder on the largest scale. It was really the

qualities in which the two men agreed,—the overbearing private arrogance and vanity, the indifference to the public interests as compared with the private interests involved in the issues on which they showed themselves most deeply interested,—which excited Macaulay's wrath in both instances ; but he was not careful to reserve the historic style for the historic occasion. He was a good hater, but like a good Whig, what he hated most were the sort of faults which made a man prefer his private in- terests to the interests of the public, whether they were or were not the sort of faults which brought him into collision with him- self. What can be better in its way, but what could be less conversational, and more on the high level of great historical judgments, than this diagnosis of Lord Brougham, which Mar- garet Macaulay put down in her journal as early as November, 1831 ?—

This vehemence of personal feeling is, of course, quite incon- sistent with the frigidity of temperament which is usually ascribed to men who are rather incarnate principles than human beings. And as Mr. Trevelyan shows, in. private and domestic relations, Macaulay, so far from being an incarnation of general principles,

was one of the tenderest and most passionately attached of men. Still, it is true of him, and in some sense, his chief- peculiarity, that deep as were his individual Affections, his intellect worked -chiefly, if not exclusively, not on those points where the indi- vidual affections are concentrated, not on religious faith or moral problems or the interior of personal life, but on the characteristic features and principles of public life and social progress, on those pictorial aspects of men and of affairs which are of the most importance in bringing before the mind the march of -public events,—and that even in his poetry while he is pic- turesque and eloquent, he never really touches the centre of personal feelings. His mind had, in some sense, too much -generalising impulse and grasp for that individuality which is of the very essence of the highest poetry. Take the lines written after his rejection at Edinburgh in 1847. Mr. Trevelyan speaks of them With admiration. But to us they have the fault of all Macaulay's poetry, that they are far too abstract, —pictorial without being life-like,—and that instead of touching the centre of the indi- tidual situation, they would apply equally well to almost any man's public failure, and indeed to a great many men's much better than -to his own. There is, in his poetry, a breadth and washiness of -colour which is admirable for the purposes of pictorial generalisa- tion, but Which fails in touching the real centre of any deep feeling. And in fact, Macaulay would not have been what he was, a per- fect well-spring of information and instruction and illustration on the significance of political history, if he had not had an intellect which turned itself almost spontaneously away from what was -strictly individual, and towards the more general lessons of public life. His nature indeed was much more than intellectual, but, so far as it was intellectual, it was a sort of sieve in which to sift out the pictures and the lessons best adapted for public use, while the remnant which had no such public significance was put almost or quite unconsciously aside. In writing of Sir Samuel Homily's life, he says, "A fine fellow, but too stoical for my taste. I love a little of the Epicurean element in virtue." The truth is, Ito had just enough of it to adapt himself to his age. He was by MO means an Epicurean. But had he been wholly without the Epi- curean in him, he would not have been the Whig philosopher he was.

Considering that Lord Macaulay's imagination was so striking a part of all that was greatest in him, it would seem curious to many people that he should have felt keenly his want of -critical capacity to enter into the individual merits of great Works of imagination ; but if our account of him be correct, this is exactly what we *might expect. In declining to review Sir Walter Scott for the Edinburgh, he puts his refusal pre- -cisely on this ground. Such a review ought, he says, to be a -criticism on Scott's great works of imagination, and for such a -task he has no power. "I have never written a page of criticism -on poetry or the fine arts which I would not burn, if I had the power. Hazlitt used to say of himself, am nothing, if not -critical.' The case with me is directly the reverse. I have a strong and acute enjoyment of works of the imagination, but I have --never habituated myself to dissect them. Perhaps I enjoy them the more keenly for that very reason. Such books as Lessing's Laocoon, such passages as the criticism on Hamlet in Wilhelm Meister, fill me with wonder and despair." That was a perfectly intelligible avowal of Lord Macaulay's. His genius, though imaginative in its kind, was not imaginative in the sense of entering deeply into the life of any individual crea- tion, but was of the type which rejects what is strictly individual, -for what has a public lesson and a political drift. We have seen a reproach brought against Mr. Trevelyan that he has not allowed his uncle's private belief in relation to religion and other such matters on which he never wrote and hardly ever conversed, to -come out more clearly. It is quite possible that Mr. Trevelyan had not the means of telling the secret. It is quite possible, too, that if he had the means, his account of Lord Macaulay's private thoughts on subjects to which his intellect was not directed with Any vigour or certainty, would not have added to the value of the book. A more perfect picture of the great Whig essayist 'could hardly have been produced than the picture which Mr. Trevelyan has painted with so reticent a good taste, and yet with -Ito much delicacy of perception. To have filled-in the pages in that life which are so characteristically left blank, might have -spoiled the portrait, and could hardly have improved it.