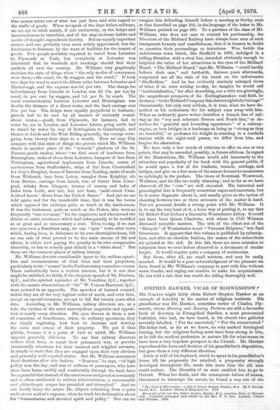 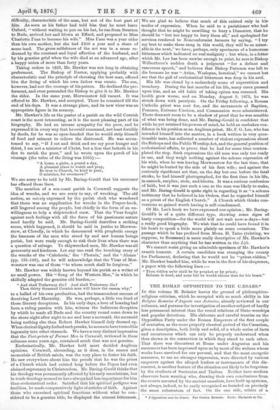 Mn. GALTON might fairly claim Robert Stephen Hawker as am example of heredity in the matter of religious instincts. Hiis grandfather was Dr. Hawker, sometime rector of Charles, Ply- mouth, whose Morning and Evening Portions are still a favourite book of devotion in Evangelical families, a most pronounced Calvinist, who had, we have heard, in his church two galleries severally labelled, "For the converted," " For the unconverted." His father had, as far as we know, no very marked theological leaning, but the religious feeling must have been strong in him, as he left the medical profession in mature life for what seems to have been a very hopeless prospect in the Church. Mr. Hawker reproduced the force and decision of his grandfather's disposition, but gave them a very different direction.

Little is told of his boyhood, which he spent in his grandfather% house till his propensity for mischief, a propensity strongly developed throughout life, made him more than the old man could endure. The liberality of an aunt enabled him to go to Oxford. When her death, and the consequent failure of means, threatened to interrupt his career, he found a way out of the

difficulty, characteristic of the man, but not of the beat part of him. As soon as his father had told him that he must leave Oxford, "without waiting to put on his hat, he ran from Stratton to Bade, arrived hot and blown at Effard, and proposed to Miss Charlotte Fans to become his wife." Miss I'aus was a year older than his own mother, but she had £200 a year and a share of some land. The gross selfishness of the act was in a sense re- deemed by the constant and loyal affection of the husband, and by his genuine grief when the wife died at an advanced age, after a happy union of more than forty years.

Taking orders in 1829, Mr. Hawker was not long in obtaining preferment. The Bishop of Exeter, applying probably with characteristic zeal the principle of choosing the best man, offered him the living of which his own father was curate. The son, however, had not the courage of his patron. He declined the pre-

ferment, and even persuaded the Bishop to give it to Mr. Hawker the elder. In the same year, Morwenstow fell vacant. It was offered to Mr. Hawker, and accepted. There he remained till the end of his days. It was a strange place, and its new vicar was an appropriate figure in its scenery.

Mr. Hawker's life as the pastor of a parish on the wild Cornish coast is the most interesting, as it is the most pleasing part of his biography. He had an intense sympathy for the poor, and he expressed it in every way that he could command, not least forcibly by deeds, for he was so open-handed that he would strip himself of food and raiment to relieve the distressed. He was accus- tomed to say, "If I eat and drink and see my poor hunger and thirst, I am not a minister of Christ, but a lion that lurketh in his den to ravish the poor," and he wrote upon the porch of his vicarage (the value of the living was £365) :—

" A home, a glebe, a pound a day, A pleasant place to watch and pray, Be true to Church, be kind to poor, 0 minister, for evermore !"

We are sorry to be told by Mr. Baring-Gould that his successor has effaced these lines.

The mention of a sea-coast parish in Cornwall suggests the idea of wrecks, and we are sorry to say, of wrecking. The o/d notion, so naieely expressed by the parish clerk who wondered that there was no supplication for wrecks in the Prayer-book, still lingered among the people, but chiefly in the form of an un- willingness to help a shipwrecked crew. That the Vicar fought against such feelings with all the force of his passionate nature need hardly be said. Mr. Baring-Gould describes a striking scene, which happened, it should be said in justice to Morwen- stow, at Clovelly, in which he denounced with prophetic energy the baseness of the men who stood by and saw human beings perish, but were ready enough to risk their lives when there was a question of salvage. To shipwrecked men, Mr. Hawker was all generosity and kindness. Let any one read the touching story of the wrecks of the Caledonia,' the 'Phoenix,' and the 'Alonzo' (pp. 131-148), and he will acknowledge that the Vicar of Mor- wenstow was one of those "to whom much shall be forgiven."

Then thirty thousand Cornish men will know the reason why,"

to a ballad of his own production, had the transcendent success of deceiving Lord Macaulay. He was, perhaps, a little too fond of these literary deceptions. In his early days, a love of hoaxing had been a ruling passion with him, witness the ludicrous deception by whieh he made all Bude and the country round come down to the shore night after night to see and hear a mermaid, the mermaid being nothing else than Robert Hawker himself duly dressed up. When clerical dignity forbad such pranks, he seems to have turned his ingenuity into other channels. We have a very distinct impression that the Foot-prints of Former Men in Cornwall, reviewed in these columns some years ago, contained much that was not genuine.

Ecclesiastically, Mr. Hawker held most decided. Anglican opinions. Cornwall, abounding, as it does, in the names and memorials of British saints, was the very place to foster his faith. He saw everywhere about him the proofs that he was the priest of a Church which had existed long before the Popes had even claimed supremacy in Christendom. Mr. Baring-Gould thinks that his theology was permanently affected by his early associations, but in truth theology seemed to have always had less impocrance for him than ecclesiastical order. Satisfied that his spiritual pedigree was faultless, he made comparatively light of articles of faith. Against those who exercised spiritual functions without what he con- sidered to be a genuine title, he displayed the utmost bitterness. We are glad to believe that much of this existed only in his modes of expression. When he said to a parishioner who had thought that he might be unwilling to bury a Dissenter, that he should be "but too happy to bury them all," and apologised for services rendered to Nonconformist farmers by saying, "I try my best to make them snug in this 'world, they will be so miser- able in the next," we have, perhaps, only specimens of a humorous. bitterness which indicated no real malignity ; but when, in a letter

which Mr. Lee has been unwise enough to print, he sees in Bishop Wilberforce's sudden death a judgment "for a defiant and rancorous speech," and believes that Bishop Patteson was left to die because he was "Arian, Wesleyan, heretical," we cannot but

see that the gall of ecclesiastical bitterness was deep in his soul. • His life was closed by a melancholy scene of superstition and treachery. During the last months of his life, many cares pressed upon him, and an old habit of taking opium was resumed. His- health grew worse, and on Monday, August 9, 1875, he was struck down with paralysis. On the Friday following, a Roman Catholic priest was sent for, and the sacraments of Baptism, Penance, Extreme Unction, and Communion were administered. There does not seem to be a shadow of proof that he was sensible of what was being done, and Mr. Baring-Gould is confident that while he yet retained his powers of mind, he held an unshaken con- fidence in his position as an Anglican priest. Mr. F. G. Lee, who has- intruded himself into the matter, in a book written in very ques-

tionable taste, has collected a number of violent expressions about the Bishops and the Public Worship Act, and the general position of

ecclesiastical affairs, to prove that he had for some time contem- plated the step. Such expressions the old man was only too ready to use, and they weigh nothing against the solemn expression of his wish, when he was leaving Morwenstow for the last time, that -he might be buried by the side of his first wife ; and against the curiously significant act that, on the day but one :before the fatal stroke, he had himself photographed, for the first time in his life, in cassock, surplice, stole, and biretta. It was a curious confession of faith, but it was just such a one as the man was likely to make, and Mr. Baring-Gould is quite right in regarding it as "a solemn testimony that he believed in his Orders, that he regarded himself as a priest of the English Church." A Church which thinks con- versions so gained worth having is self-condemned.

Of Mr. Lee's book we have expressed our opinion ; Mr. Baring- Gould's is of a quite different type, •showing some signs off hasty composition—for the world will not wait now-a-days—but a really good biography. We wish that he could have found it in his heart to speak a little more plainly on some occasions. The passage which he has prefixed from Mons. H. Taine (relating, we suppose, to Rousseau) is more really descriptive of Mr. Hawker's character than anything that he has written in the Life.

We cannot resist giving an admirable specimen of Mr. Hawker's caustic humour. A certain candidate was stumping the county for Parliament, declaring that he would not be "priest-ridden." Mr. Hawker handed him, while he was in the flow of his eloquence,. a paper with the following lines :—

"Thou ridden ne'er shall be by prophet or by priest ; Balsam is dead, and none but he would choose thee for his beast".