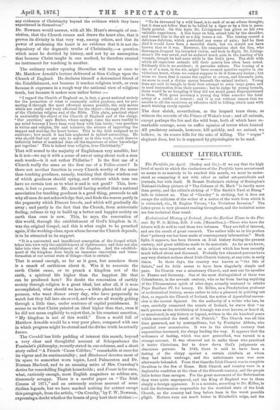 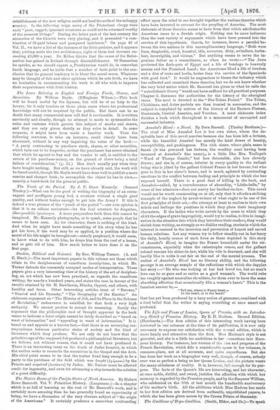 Page 21, 8 April 1876 — Ecclesiastical History of Ireland, from the Earliest Times to the
Close

Ecclesiastical History of Ireland, from the Earliest Times to the

Pre- sent. By W. 0. Killen, D.D. 2 vols. (Macmillan.)—Those who have the leisure will do well to read these two volumes. They are full of interest, and are the result of great research. The author tells us in his preface that" primary use has been made of contemporary information." Much light, it appears, has been thrown on Irish history during the present century, and great additions made to its materials. As far as we know, this is the most important work on a subject which has been recently much talked about and discussed. Probably few educated persons have any very distinct notions about Irish Church history, at any rate, in early times. In those days, the country was known as "the Isle of Saints," and its faith seems to have been singularly simple and pure. Its Church was a missionary Church, and sent out its apostles to France and Germany. One of the most distinguished of these was Columbanna, in the seventh century, who so far from having anything of the Ultramontane spirit of after-days, actually ventured to rebuke Pope Boniface IV. for heresy. Dr. Killen, as a Presbyterian professor of ecclesiastical history, seems rather to take a pleasure in pointing out that, as regards the Church of Ireland, the notion of Apostolical succes- sion is the merest figment. On the authority of a writer who has, he says, carefully examined the annals of Ireland, he states that "no such person as the Archbishop of Armagh was ever known, or heard of, or mentioned, in any history or legend, written in the six hundred years which succeeded the death of St. Patrick." The Church was all this time governed, not by metropolitans, but by Presbyter Abbots, who presided over monasteries. It was in the eleventh century that superstition increased, the clergy leading the way. It appears that the ordinance of fasting, which was now prescribed, was turned to a strange account. It was observed not to make those who practised it better Christians, but to draw down God's judgments on obnoxious persons. In 1043, there is said to have been a fasting of the clergy against a certain chieftain at whom they had taken umbrage, and the unfortunate man was soon afterwards beheaded. From that time the Irish Church was in complete thraldom to the See of Rome. Both Church and country were in a deplorable condition at the close of the fifteenth century, and the people little better than savages. For the great movement of the Reformation they were quite unprepared, and the King of England was to them simply a foreign oppressor. It is a mistake, according to Dr. Killen, to bold the Reformation responsible for the wretched state of the Irish Church, as the country had long before been in the worst possible plight. Matters were not mach better in Elizabeth's reign, and the

establishment of the new religion could not heal the evils of the unhappy Country. In the following reign many of the Protestant clergy were such "poor, ragged, ignorant creatures as could not be esteemed worthy of the meanest livings." During the latter part of the last century the anomalies of the Church were very glaring, and it presented "a com- bination of ill-paid labour and pampered indolence." On page 46 of Vol. II., we have a list of the incomes of the Irish prelates, and it appears that, putting aside the two archbishops, eight of them had incomes ex- ceeding 1,5,000 a year. Dr. Killen thinks that the cause of the Refor- mation has gained in Ireland through disestablishment. Of Romanism he speaks, as we should expect a,Presbyterian would do, in somewhat harsh language, and he holds that a number of facts point to the con- clusion that its general tendency is to blunt the moral sense. Whatever may be thought of this and other opinions which he sets forth, we have no hesitation in recommending his work to all who wish to improve their acquaintance with Irish history.