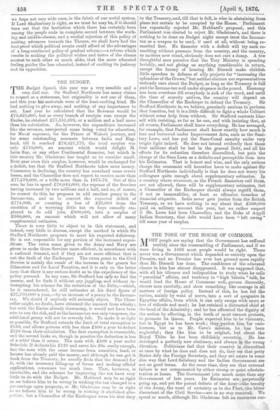 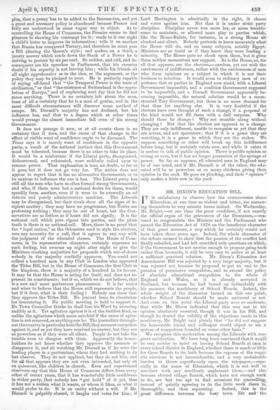 THE TONE OF THE HOUSE OF COMMONS.

it/OST people are saying that the Government has suffered AM. terribly sinoe the reassembling of Parliament, and if we were living in 1866 most people would be right. There never was a Government which depended so entirely upon the Premier, and no Premier has ever lost ground more rapidly than 31;.. Disraeli has done. The confidence of the educated classes in him has almost disappeared. It was supposed that, with all his idleness and indisposition to study what he calls "parochial" affairs, and tendency to "high 'falutin " talk, he would lead the House of Commons well, govern discreetly, choose men carefully, and show something like courage in all matters of foreign policy. Instead of this, he has led the nation, mainly by want of nerve, into a sort of quagmire in Egyptian affairs, from which it can only escape with more or less of ridicule and mud ; he has retained a distrusted chief at the head of the Admiralty; and he has affronted the dignity of the nation by affecting, in the teeth of most earnest protests, to promote its Queen. People expected him to be visionary, bat in Egypt he has been weak ; they pardon him for care- lessness, but as to Mr. Cave's mission, he has been neglectful; they like him to be original, but about the Royal Titles he has been childishly eccentric. He has developed a perfectly new obstinacy, and always in the wrong direction. Politicians feel that their country is discredited at once by what he does and does not do, they see that petty States defy the Foreign Secretary, and they are aware in some dim way that Lord Salisbury and the Indian Government are not on good terms. At the same time, they see that external failure is not compensated by either strong or quiet adminis- tration at home. The Government jobs much more than any Government of late years. Its Estimates are perpetually going up, and yet the patent defects of the hour—the tenuity of the Army, the want of certainty as to the Fleet,-the bitter discontent of the Civil Service—are in no way removed. We spend so much, although Mr. Gladstone left an enormous sur- plus, that a penny has to be added to the Income-tax, and yet a great and necessary policy is abandoned because Prance and Italy are understood in some vague way to object. As to controlling the House of Commons, the Premier seems to find pleasure in showing his contempt for it ; reads to it one night a child's letter to improve its information • tells it on another that Russia has conquered Tartary, and therefore he must pass a Bill altering the Queen's style ; and makes, on a third, a jaunty answer which sends down the Stock of a Power he is striving to protect by six per cent. So sudden, and odd, and in- consequent are his speeches in Parliament, that his enemies doubt if his capacity is not leaving him ; while his friends sit all night apprehensive as to the idea, or the argument, or the policy they may be pledged to next. He is perfectly capable of saying off-hand that -" the Temporal Power is the basis of civilisation," or that "the existence of Switzerland is the oppro- brium of Europe," and of explaining next day that he did not mean anything. There is no certainty left about the man, least of all a certainty that he is a man of genius, and in the most difficult circumstances will discover some method of escape. Mr. Disraeli's majority has not declined, but his influence has, and that to a degree which at other times would presage the almost immediate fall even of his strong Government.

It does not presage it now, or at all events there is no certainty that it does, and the cause of that change in the effect of visible want of confidence ought to be discussed. The Times says it is merely want of confidence in the opposite party, a result of the national instinct that this Government must be tolerated, because there is no other to take its place. It would be a misfortune if the Liberal party, disorganised, disheartened, and exhausted, were suddenly called upon to resume power. That explanation is true, no doubt, so far as it goes, but it does not go very far. The nation does not appear to regret that it has no alternative Government, or to be anxious to influence the one it has. The Liberal party has still all the men who have so often formed strong Governments, and who, if there were but a national desire for them, would speedily form another, even if it were to be avowedly an ad interim and purely administrative machine. The Liberals may be disorganised, but their rivals show all the signs of in- cipient mutiny ; they may have no programme, but Tories are professing nothing ; they may be out of heart, but the Con- servatives are as listless as if heart did not signify. It is the national call which puts vigour into parties, and the plain truth is there is no national call. More, there is no proof that the "legal nation," as the Orleanists used to style the electors, sees any necessity for a call, that it agrees in any way with the judgment of the educated classes. The House of Com- mons, in its representative character, certainly expresses no such feeling, but swarms up night after night to give the Ministers crushing majorities for proposals which out-of-doors nobody in the majority cordially approves. You could not collect a hundred men in any Club in London who approved the Titles Bill, but in the House of Commons, the first Club in the kingdom there is a majority of a hundred in its favour. It may be that the House is acting for itself, and does not re- present its constituents; but if so, which we do not believe, that is a new and most portentous phenomenon. It is far easier and wiser to believe that the House still represents the people, but if it does, what is their feeling ? Nobody can show that they approve the Titles Bill. No journal loses its circulation for denouncing it. No public meeting is held to support it. No Town Councillor thinks he shall lose his Ward by swearing audibly at it. Yet agitation against it is of the feeblest kind, as unlike the agitations which mean mischief if the cause of agita- tion is not removed, as anything can be. The journalists through- out the country in particular hate the Bill, they are most outspoken against it, and as yet they have received no answer, but they are as powerless as if they were all silent. People do not take the trouble even to disagree with them. Apparently the house- holders do not know whether they approve the measure or disapprove it, and sit watching Mr. Disraeli as if he were the leading player in a pantomime, whom they had nothing to do but observe. They do not applaud, but they do not hiss, and for am that appears they are not even interested, but only sit on quiescent, like children in church. Keen and .experienced observers say that this House of Commons differs from every other of recent years, that it has wonderfully little confidence in either party, that nobody has "got hold" of it yet, that it has not a notion what it wants, or whom it likes, or what it would prefer to do. It is an entity without a will. If Mr. Disraeli is palpably absurd, it laughs and votes for him ; if

Lord Hartington is admittedly in the right, it cheers and votes against him. Not that it is under strict party discipline. Discipline never was more lax, or more trouble- some to maintain, or allowed more play to parties which, like the Home-Rulers, for instance, in a strong House sit abashed and silent. Nobody pretends to know accurately what the House will do, and on many subjects, notably Egypt, Ministers are as timid as if they knew they were leading a minority. The House puts no check upon them, but it gives them neither momentum nor support. As is the House, so, for all that appears, are the electors,—careless, yet not with the- carelessness of indifference, rather with the carelessness of men who form opinions on a subject in which it is not their business to interfere. It would seem to ordinary men of ex- perience that as parties in England now stand, with a Liberal Government impossible, and a coalition Government supposed to be impossible, and a Disraeli Government apparently be- coming impossible, the natural solution would be a recon- structed Tory Government, but there is no more demand for that than for anything else. It is very doubtful if the electors have ever thought of such a change, if a proposal of the kind would not fill them with a dull surprise. Why should there be change ? Why not stumble along without changing ? Not that the electors are opposed to a change. They are only indifferent, unable to recognise as yet that they are actors, and not spectators ; that if it is a game they are watching, it is a game in which they are the stakes. We suppose something or other will break up this indifference before long, but it certainly exists now, and while it exists it is useless to talk of public opinion. There is public opinion as strong as ever, but it has no longer possession of the springs of power. So far as appears, all educated men in England may be of one mind, and if Mr. Disraeli is of the other, the edu- cated will be as powerless as so many chickens giving their opinion to the cook. He goes on plucking, and their " opinion " only makes a little row in the yard.