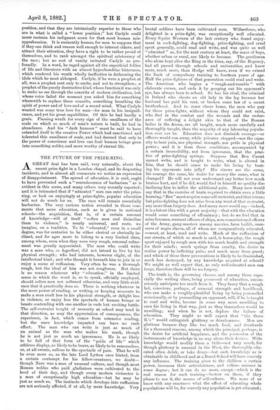 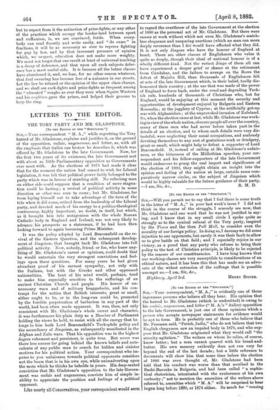 THE FUTURE OF THE PRIZE-RING.

AGREAT deal has been said, very naturally, about the recent prize-fight in a London chapel, and its disgusting incidents, and in almost all comments we notice an expression of disappointment. The spread of education, it is said, ought to have prevented such a "recrudescence of barbarism" as is evident in this scene, and many others very recently reported ; and it is intimated that if " educated " men can enter the prize- ring, or look on enjoyingly at prize-fights, popular education will not do much for us. The race will remain essentially barbarian. The very curious notion revealed in those com- ments that mere education, such as is given in national schools—the acquisition, that is, of a certain amount of knowledge—will of itself "soften men and disincline them to violence," is nearly universal, and rests, we imagine, on a tradition. To be "educated," even in a small degree, was for centuries to be either clerical or clerically in- clined, and for ages more to belong to a very limited class, among whom, even when they were very rough, external refine- ment was greatly appreciated. The man who could write was a man who, az hypothesi, did not intend to live by his physical strength ; who had interests, however slight, of the intellectual kind ; and who thought it beneath him to join in or enjoy a scene of ruffianism. Very often he was a thorough rough, but the ideal of him was not roughness. But there is no reason whatever why "education," in the limited sense in which the word is, so to speak, officially employed, should soften men not softened otherwise, and very little evid- ence that it practically does so. There is nothing whatever in the mere power of reading, or writing, or keeping accounts to make a man exult less in his physical strength, or delight less in violence, or enjoy less the spectacle of human beings or beasts contending with one another in rude but exciting battle. The self-restraint taught of necessity at school may tend in that direction, as may the appreciation of consequences, the experience, in fact, which comes from extensive reading, but the mere knowledge imparted can have no such effect. The man who can write is just as much of an animal as the man who makes his mark, though he is not just as much an ignoramus. He is as likely to be full of that form of the "pride of life" which athletes display, as likely to be brave, as likely to be remorseless, or, at all events, callous to the spectacle of pain. That he will be even more so, as the late Lord Lytton once hinted, from a certain contempt for his fellow-creatures, we doubt— though Nero was a man of unusual culture, and though most Roman nobles who paid gladiators were cultivated to the level of their day, and though every modern vivisector is a man of exceptionally high education—but he may be just as much so. The instincts which develope into ruffianism are not seriously affected, if at all, by mere knowledge. Very

brutal soldiers have been cultivated men. Wilberforce, who delighted in a prize-fight, was exceptionally well educated. Every Squire Western of the last century who found enjoy- ment in cock-fighting, dog-fighting, prize-fighting, and cruel sport generally, could read and write, and was quite as well " educated " as, for the next century at least, the mass of boys, whether urban or rural, are likely to become. The gentlemen who alone kept alive the Ring in the time, say, of the Regency, had all passed through schools and universities, and knew more, much more, than Hodge will know, even if we extend the limit of compulsory training to fourteen years of age. Half the prize-fighters of that generation could read and write. The American who begins a " rough-and-tumble " with elaborate curses, and ends it by gouging out his opponent's eye, has always been to school. So has his rival, the criminal in Ireland who shoots an old lady in the leg because her husband has paid his rent, or broken some law of a secret brotherhood. And to come closer home, the men who pay for these prize-fights, without whom they could not exist, who find in the combat and the wounds and the endur- ance of suffering a delight akin to that of the Roman ladies in the Arena, are all taught, much more carefully and thoroughly taught, than the majority of any labouring popula- tion ever can be. Education does not diminish courage—or officers would run away, while privates stopped—nor the capa- city to bear pain, nor physical strength, nor pride in physical power ; and it is from these conditions, accompanied by a certain insensibility, not from ignorance, that the prac- tice of prize-fighting springs. Suppose that Ben Caunt cannot write, and is taught to write, what is altered in him, that he should cease to make his living by beat- ing his opponents into jelly ? His sinews are the same, his courage the same, his desire for money the same, what is changed ? He will not even understand any better how much bruises hurt, and if he did, would find in himself no quality dis- inclining him to inflict the additional pain. Many men would say that in the exercise of brain required to obtain even a little learning," Ben" must acquire some self-restraint, and that is true; but prize-fighting does not arise from any want of that restraint, any more than forgery does. And many more would say—indeed, it is a latent idea with a great majority—that with the education would come something of effeminacy ; but do we find that in mine foremen, warrant officers of ships, non-commissioned officers of the Army, gang-masters among navvies, farm bailifs, over- seers of negro slaves, all of whom are comparatively educated, —must, at least, read and write. Much of the ruffianism of our streets, of which so much is said, is horse-play, the rough sport enjoyed by rough men with too much health and strength for their minds ; much springs from cruelty, the desire to realise power by inflicting pain ; and much more from greed; and which of those three provocations is likely to be diminished, much less destroyed, by any knowledge acquired at school ? We might as well expect that, as only well-educated men can forge, therefore there will be no forgery.

The truth is, the governing classes, and among them espe- cially the writing class, being possessed of education, uncon- sciously anticipate too much from it. They fancy that a rough lad, conscious, perhaps, of unusual strength and hardihood, who can make a roughly-plentiful living by being pommelled occasionally, or by pommelling an opponent, will, if he is taught to read and write, become in some way more unwilling to earn his living in that way, just as they themselves would be unwilling; and when he is not, deplore the failure of education. They might as well expect that "the three R.'s " would extinguish gluttony or drunkenness. Men are gluttons because they like too much food, and drunkards for a thousand reasons, among which the principal, perhaps, is the desire for artificial happiness, and the possession of the instruments of knowledge in no way alters their desires. Wide knowledge would modify them a little—not very much, for though gluttony is unusual in the West, the thoroughly edu- cated often drink, or take drugs—but such knowledge as is obtainable in childhood and at a Board School will have scarcely any influence. The training gives to the children a certain power, increases their articulateness, and softens manner in some degree ; but it can do no more, except—which is the real reason for such training—bestow on them, if they please to use it, the means of self-culture. We none of us know with any exactness what the effect of educating whole populations will be, for scarcely any population is yet educated; but to expect from it the extinction of prize-fights, or any other of the practices which occupy the border-land between sport and ruffianism, is, we are convinced, futile. When every- body can read fluently and write easily, and "do sums" in fractions, it will be as necessary as ever to repress fighting for pay by law, and by that incessant pressure of opinion which, we suspect, education does not make more weighty. We must not forget that one result at least of universal teaching is a decay of deference, and that upon all such subjects defer- ence has a most useful side. It is because all the better classes have abandoned it, and, we fear, for no other reason whatever, that foul swearing has become less of a nuisance in our streets. Let the law be relaxed or the opinion of the upper class change, and we shall see cock-fights and prize-fights as frequent among the " educated " roughs as ever they were when Squire Western and his confreres gave the prizes, and helped their grooms to keep the ring.