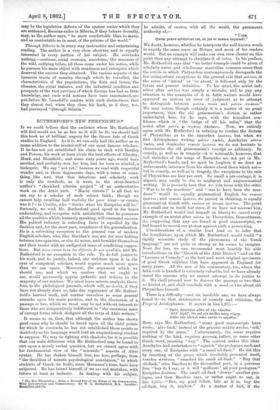 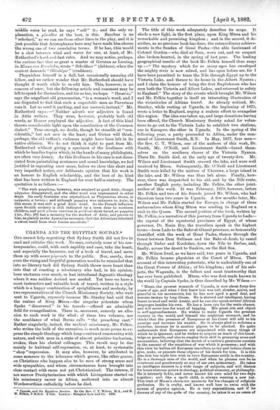 audience whom Mr. Rutherford will find would not be as few as it will be fit, we should hail this book as of brilliant augury for the future fate of Greek studies in England. As it is, we can only hail the author as no mean addition to the muster-roll of our most famous scholars. If he has not yet established his claim to rank with Bentley and Porson, his work at least rivals the best efforts of Elmsley, Monk, and Blomfield ; and some sixty years ago, would have merited, and probably won for him, had he been so minded, a bishopric. We say "not yet," because we read with respectful wonder and, in these degenerate days, with a sense of some- thing like awe, that this laborious and scholarly work is only the vestibule, as it were, to the stout-hearted author's "cherished ulterior project" of an authoritative work on the Attic verb. " Macte virtute !" is all that we can say to a scholar of such robust faith ; though we cannot help recalling half ruefully the poor vicar—or curate, was it P—in Crabbe, who "thinks what his Euripides will be." Seriously, we wish Mr. Rutherford good speed in his brave undertaking, and recognise with satisfaction that he possesses all the qualities which, humanly speaking, will command success. His patient industry in collecting facts is equalled by the decision and, for the most part, soundness of his generalisation. He is a refreshing exception to the general run of modern English scholars, who, like Buridan's ass, are for ever halting between two opinions, or else do worse, and bewilder themselves and their reader with an undigested mass of conflicting sugges- tions. But noes avons tons lea defauts de nos qualitjs, and Mr. Rutherford is no exception to the rule. To do full justice to his work, and to justify, indeed, our stricture upon it in the eyes of competent scholars, would require much more space than we can spare. Moreover, the argument which we should use, and which we confess that we ought to use, would necessarily appear pedantic and tedious to the majority of our readers. We must leave minute analysis, there- fore, to the philological journals, which will, no doubt, if they have not already done so, take due cognisance of Mr. Ruther- ford's learned work, and confine ourselves to some general remarks upon his main position, and to the discussion of a passage or two, which we trust may be not without interest to those who are comparatively indifferent to "the enormous mass of corrupt forms which disfigure all the texts of Attic writers."

It seems to us, then, that although the author has shown good cause why he should be heard upon all the chief points for which he contends, he has not established those points so decisively as his language would lead an unquestioning student to suppose. We may be fighting with shadows, for it is possible that our main difference with Mr. Rutherford may be found to rest upon a merely verbal question, but we cannot agree with his fundamental view of the "scientific" aspects of Attic syntax. He has shaken himself free, too free, perhaps, from "the thraldom of minute psychological annotation," to which students of Greek, he holds, since Hermann's time, have been subjected. He has bound himself, if we are not mistaken, with fetters at least as inelastic. In dealing with his subject,

* The New Phrynichus: being a Revised Text of the Beloga of the Grammarian. With Introduction and Commentary. By W. G. Rutherford, M.A. London : Macmillan and Co.

he admits, of course, with all the world, the paramount authority of,—

We doubt, however, whether he interprets the well-known words in exactly the same sense as HoVace and most of his readers would. But an example will make our own view clearer on this point than any attempt to elucidate it ab infra. In his preface, Mr. Rutherford says that " no better example could be given of scholarly nerve and wholesome masculine common-sense than the article in which Phrynichus contemptuously disregards the few unimportant exceptions to the general rule that aiawuy, in the sense of intend' or 'be about,' is followed only by the future and present infinitive. To his mind, the aorist itifi- nitive after pine& was simply a mistake, and to pay any attention to the examples of it in Attie writers would have appeared as serious an error of judgment as to attempt to distinguish between ittEAA4) 170Iii9 and iciAXw ereelieretv." We may notice, though certainly it is a matter of no great importance, that the old grammarian's dictum is rather understated here, for he says, with the truculent con- fidence which is "the badge of all his tribe," that the aorist. after /Abated igxeirco; picoapoc. Now, we entirely agree with Mr. Rutherford in refusing to confine the dictum of Phrynichus as to the imperfect 1#41xxom, but when we find Aristophanes writing aixxa xageiy, Aeschylus fabt?tee treseeis, and Sophocles xrceniv gpaXoe, we do not hesitate to characterise the old grammarian's rescript as arbitrary. In comedy, as well as in tragedy—it is noticeable, however, that full statistics of the usage of Euripides are not yet in Mr. Rutherford's hands, and we must be forgiven if we draw an unfavourable inference from his silence about those which are— but in comedy, as well as in tragedy, the exceptions to the rule of Phrynichus are four per cent. So small a per-centage, it is argued, may easily be due to negligent and ungrammatical writing. It is precisely here that we join issue with the critic. "Was to be the murderer" and "was to have been the mur- derer" would be equally grammatical English for wraytir taa000m ; and ILTAYilY 4467LAOY, we persist in thinking, is equally grammati3a1 Greek with ILTf111£11, or weenie glethAoe. The point is a small one in itself, but since, if we have not misread him, Mr. Rutherford would feel himself at liberty to cancel every example of an aorist after tcixx,.. in Thucydides, Demosthenes, &c. (supposing that any are found in good manuscripts), we feel bound to record our protest against such a proceeding.

Considerations of a similar kind lead us to infer that the foundations upon which Mr. Rutherford would build "a rigidly scientific study of the phenomena of the Greek language" are not quite so strong as he seems to imagine. None the less, we can recommend most heartily his able introductions on the "Growth of the Attic Dialect" and on the "Lessons of Comedy," as the best and most original specimens of good Greek criticism that have appeared in England for many years. All the rest of his commentary, too, where the Attic verb is handled is extremely valuable, but we have already stated the reasons why we cannot attempt to do justice to it. We shall proceed now to discuss the passage or two that we hinted at, and shall conclude with a word or two about old Phrynichus himself.

There is a difficulty—and an insoluble one, we have always found it—in that masterpiece of comedy and criticism, the Frogs of Aristophanes. It occurs in line 1,235 :—

Here, says Mr. Rutherford, "many good manuscripts have ci7:66;,' give back,' instead of the genuine middle awaou, sell,' required by the sense." Unfortunately, the sense requires nothing of the kind, requires iiiroTrpia, rather, or some other Greek word, meaning "buy." The context makes this clear Aeschylus had undertaken to "squelch "the prologues, each and every one, of Euripides with "a small oil-flask." He did this by inserting at the pause which inevitably presented itself, a sm./Otos, eilrhheyer, "smashed his small oil-flask." "Buy that oil-flask," cries Bacchus to the discomfited poet, in a previous line, "buy it, I say, or it will ‘spiflicate ' all your prologues." Euripides declines. The small oil-flask " downs " another pro- logue, and then Bacchus says, or rather ought to say, in line 1,235,—" But, my good fellow, late as it is, buy the oil-flask, buy it, anyhow." As a matter of fact, if the

planation, a pis-aller at the best, is this. Bacchus is no " scholard," as we can see from other lines in the play, and it is

just possible that Aristophanes here may have made him choose the wrong one of two correlative terms. If he has, this would be a shot between wind and water for one, at least, of Mr.

Rutherford's hard-and-fast rules. And we may notice, perhaps, the curious fact that so great a master of German as Lessing, in Minna von Barnitelm, wrote " Schaidner " (debtors), when the -context demands Glilubiger" (creditors).

Phrynichus himself is a dull, but occasionally amusing old fellow, and we rather wonder that Mr. Rutherford should have

thought it worth while to re-edit him. This, however, is no concern of ours ; but the following article and comment may be left to speak for themselves, and for us too, we hope. " Hpoaxi4," says the ungallant old grammarian, "is a woman's word, and I am disgusted to find that such a respectable man as Favorinus uses it. Let us send it packing, and use 7pos-Er7a; instead." Mr. Rutherford says :—" Neither adverb nor adjective is found

in Attic writers. They were, however, probably both old words, as Homer employed the adjective. A fact of this kind throws considerable light upon the constitution of the Common dialect." True enough, no doubt, though We stumble at "-con- siderable,7 but not new in the least ; and Girton will think, perhaps, the old ruffian's rudeness might have been left in its native oblivion. We do not think it right to part from Mr. Rutherford without giving a specimen of the liveliness with which he handles topics which, in the hands of many philologists, are often very dreary. As this liveliness in his case is not disso- ciated from painstaking acuteness and sound knowledge, we feel justified in repeating once more, before we close this short and very imperfect notice, our deliberate opinion that his work is an honour to English scholarship, and the best of its kind -that has been written in England for over half-a-century. The quotation is as follows :—

"The verb TryyliAAto, however, was retained as good Attic, though -yleryaos disappeared, and the older word was represented in other ways. Its early feminine was crystallised, as Phrynicbus shows, in -yorytafs, a turnip ; and although yoyytiAn was unknown to Attic, in this sense, it was still a good Attic word. As the French influence upon Scotch cookery is still indicated by a term dear to northern -children, and petit gateau survives in petticoat abort-bread, so .707y1A.a (Ar., Pax, 28) has a meaning for the student of Attic, and proves to him, as plainly as the Apaturian sausages, that the Athenians inherited a sweet tooth from their Ionian ancestors."