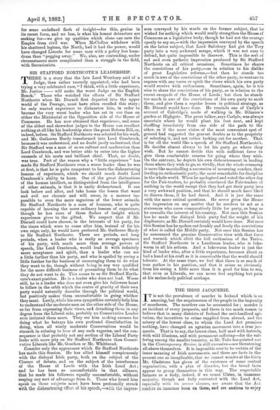 THERE is a story that the late Lord Westbury said of a Judge, then rather recently appointed, who had been trying a very celebrated case, "I think, with a little experience, Mr. Justice — will make the worst Judge on the English Bench." Those who watched the efforts of Sir Stafford Northcote when Mr. Disraeli first departed into the upper world of the Peerage, must have often recalled this story ; he only wanted experience to dishearten him, in order to become the very worst leader who has sat in our time on either the Ministerial or the Opposition side of the House of Commons. He has now obtained that experience, and some of the oldest and shrewdest judges in the House can recollect nothing at all like his leadership since the great Reform Bill, or, indeed, before. Sir Stafford Northcote was selected for his work, and Mr. Gathorne Hardy transformed into Lord Cranbrook, because it was understood, and no doubt justly understood, that Sir Stafford was a man of nalre culture and moderation than Lord Cranbrook, and was better able to enter into the higher counsels of his acute and brilliant chief. That, no doubt, was true. Part of the reason why a "little experience" has made Sir Stafford Northcote even a worse leader than he was at first, is that he is suite competent to learn the disheartening lessons of experience, which we should much doubt Lord Cranbrook's ability to learn. One of the great distinctions of the human intellect, as distinguished from the intelligence of other animals, is that it is easily disheartened. It can look before and after, and take home the lesson that want and evil are chronic and will recur, in a manner im- possible to even the more sagacious of the lower animals. Sir Stafford Northcote is a man of humour, who is quite capable of learning the more ordinary lessons of experience, though he has none of those flashes of insight which experience gives to the gifted. We suspect that if Mr. Disraeli could have chosen, in the interests of his party, for the times which were to come after him, instead of for his own reign only, he would have preferred Mr. Gathorne Hardy to Sir Stafford Northcote. There are periods, and long periods, when a leader who is really an average specimen of his party, with much more than average powers of speech, like Lord Cranbrook, would lead it with infinitely more acceptance and spirit, than a leader who can see a little further than his party, and who is spoiled by seeing a little further for the business of encouraging them to do what they want to do, though without being in any way qualified for the more difficult business of persuading them to do what they do not want to do. This seems to us Sir Stafford North- cote's exact position. He is a leader who does not lead. Worse still, he is a leader who does not even give his followers heart to follow in the orbit which the centre of gravity of their own party would naturally describe through the political world, but positively makes them uncomfortable in going whither they must. Lastly, while his own sympathies certainly help him to understand the moderate men on the other side of the House, so far from expressing their views, and detaching them in any degree from the Liberal side, probably no Conservative Leader ever irritated them more. They see him making excuses for doing what he betrays his own profound dissatisfaction in doing, when all wisely moderate Conservatives would be staunch in refusing to hear of any such vagaries, and the con- sequence is that probably not any section of the Liberal Party looks with more pity on Sir Stafford Northcote than Conser- vative Liberals like Mr. Goschen or Mr. Whitbread.

Consider only the appearance which Sir Stafford Northcote has made this Session. He has allied himself conspicuously with the disloyal Irish party, both on the subject of the Closure of debate, and on the subject of the interference of the House of Lords with the Irish Land Act ; and he has been so uncomfortable in that alliance, that he made his followers equally uncomfortable, without reaping any sort of advantage from it. Those who heard him speak on those subjects must have been profoundly struck with the disheartening effect of his speech,—with the impres•

sion conveyed by his words on the former subject, that he wished for nothing which would really strengthen the House of Commons as a legislative body, though he had not the courage openly to say so,—with the impression conveyed by the speech on the latter subject, that Lord Salisbury had got the Tory party into a very awkward scrape, which it was not easy to defend, but quite impossible to disavow. This is the sort of sad and even pathetic impression produced by Sir Stafford Northcote on all critical occasions. Sometimes he shares the convictions of his party,—as in relation to his dislike of great Legislative reforms,—but then he stands too much in awe of the convictions of the other party, to venture to express with any verve or spirit the views which his own party would receive with enthusiasm. Sometimes, again, he is too wise to share the convictions of his party, as in relation to the recent escapade of the House of Lords ; but then he stands too much in awe of the convictions of his own party to snub them, and give them a regular lesson in political strategy, as Mr. Disraeli would have done. He reminds one of Carlyle's account of Coleridge's mode of walking in Mr. Gilmore's garden at Highgate. The great talker, says Carlyle, was always uncertain where he would plant his foot next, and kept shuffling irresolutely from one side of the path to the other, as if the mere vision of the most convenient spot of ground had suggested the gravest doubts as to the propriety of selecting it, and not rather looking out for another. That is for all the world like a speech of Sir Stafford Northcote's. He decides almost always to let his party go where they wish. But he cannot decide this with sufficient force to give them comfortable reasons for going where they wish. On the contrary, he depicts his own disheartenment in leading them where they wish to go, so vividly, that the whole ceremony is more like marshalling a succession of mourning coaches, than leading an enthusiastic party, the most remarkable for discipline in the whole world. When he apologised and voted the other day for the Fair-traders, he probably convinced the Fair-traders of nothing in the world except that they had got their party into a very awkward position, and that he should much have liked to disown them, if he had dared. And it is just the same with the more critical questions. He never gives the House the impression on any matter that he resolves to act as a statesman who cares comparatively little for party, so long as he consults the interest of his country. Not once this Session has he made the disloyal Irish party feel the weight of his displeasure, as Mr. Disraeli certainly would have done. Not once this Session has he spoken out frankly and freely the convictions of what is called the Middle party. Not once this Session has he announced the genuine Conservative view with that force and warmth which elicit the full enthusiam of the Tories. Sir Stafford Northcote is a Laodicean leader, who is luke- warm in all his actions. And a lukewarm leader is just the kind of leader who, after a little experience, becomes about as bad a band at his craft as it is conceivable that the world should tolerate. At the same time, we feel that there is so much of true pathos in his position, and that it arises so obviously from his seeing a little more than it is good for him to see, that even as Liberals, we can never feel anything but pain at his melancholy political mishaps.