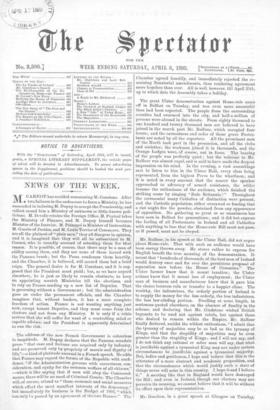 Mr. Balfour, in his speech at the Ulster Hall, did

not argue about Home-rule. That with such an audience would have been energy thrown away. He strove rather to express for English benefit the true meaning of the demonstration. It meant that "hundreds of thousands of the best men of Ireland would destroy once and for ever the pernicious proposal of separation now before the House of Commons." The Ulster farmer knew that it meant taxation; the Ulster artisan knew that it meant loss of employment ; the Ulster man of business and manufacturer knew that it gave him the choice between ruin or transfer to a happier clime. The wealthy, the industrious, the orderly portion of Ireland is to supply the money for the less orderly, the less industrious, the less law-abiding portion. Dwelling at some length, in sentences quoted elsewhere, on the absence of finality in the scheme, and declaring that Mr. Gladstone wished British bayonets to be used not against rebels, but against those who desired to remain within the Empire, Mr. Balfour finally declared, amidst the wildest enthusiasm, "I admit that the tyranny of majorities may be as bad as the tyranny of Kings, and that the stupidity of majorities may be even greater than the stupidity of Kings ; and I will not say, and I do not think any rational or sober man will say, that what is justifiable against a tyrannical King may not under oertain circumstances be justifiuble against a tyrannical majority. But, ladies and gentlemen, I hope and believe that this is the utterance of a mere abstract and academic proposition, and that the circumstances which would justify such a state of things never will arise in this country. I hope it and I believe it." A meeting like that in England would have destroyed the Bill ; and even in Ireland, though our electors may not perceive its meaning, we cannot believe that it will be without its effect upon their representatives.