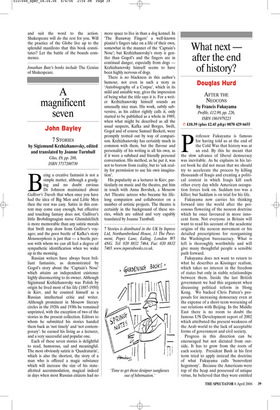 7 STORIES by Sigizmund Krzhizhanovsky, edited and translated by Joanne Turnbull Glas, £9, pp. 208, ISBN 5717200730 Being a creative fantasist is not a simple matter, although a grudging and no doubt envious Dr Johnson maintained about Gulliver’s Travels that when once you have had the idea of Big Men and Little Men then the rest was easy. Satire in this context may come easy enough, but effective and touching fantasy does not. Gulliver’s little Brobdingnagian nurse Glumdalclitch is more memorable than any satiric morals that Swift may draw from Gulliver’s voyages; and the poor beetle of Kafka’s story Metamorphosis is just that — a beetle person with whom we can all feel a degree of sympathetic identification when we wake up in the morning.

Russian writers have always been brilliant fantasists, as demonstrated by Gogol’s story about the ‘Captain’s Nose’ which attains an independent existence highly disconcerting to its owner. Although Sigizmund Krzhizhanovsky was Polish by origin he lived most of his life (1887-1950) in Kiev, and he counted himself as a Russian intellectual critic and writer. Although prominent in Moscow literary circles in the 1920s and 1930s he remained unprinted, with the exception of two of the stories in the present collection. Editors to whom he submitted his stories handed them back as ‘not timely’ and ‘not contemporary’: he earned his living as a lecturer, and a very successful and popular one.

Each of these seven stories is delightful to read, humorous, sad and meaningful. The most obviously satiric is ‘Quadraturin’, which is also the shortest, the story of a man who is offered a magic substance which will increase the size of his stateallotted accommodation, magical indeed in days when most Russian citizens had no more space to live in than a dog kennel. In ‘The Runaway Fingers’ a well-known pianist’s fingers take on a life of their own, somewhat in the manner of the ‘Captain’s Nose’; but Krzhizhanovsky’s story is gentler than Gogol’s and the fingers are in continual danger, especially from dogs Krzhizhanovsky himself seems to have been highly nervous of dogs.

There is no blackness in this author’s humour, not even in such a story as ‘Autobiography of a Corpse’, which in its mild and amiable way, gives the impression of being what the title says it is. For a writer Krzhizhanovsky himself sounds an unusually nice man. His work, subtly subversive, as his editor rightly calls it, only started to be published as a whole in 1989, when what might be described as all the usual suspects, Kafka and Borges, Swift, Gogol and of course Samuel Beckett, were promptly trotted out by way of comparison. Krzhizhanovsky has certainly much in common with them, but the flavour and personality of his writing is all his own, as if it were a subdued and friendly personal conversation. His method, as he put it, was not to borrow from reality, but to ‘ask reality for permission to use his own imagination’.

His popularity as a lecturer in Kiev, particularly on music and the theatre, put him in touch with Anna Bovshek, a Moscow Art Theatre actress who became his lifelong companion and collaborator on a number of artistic projects. The theatre is certainly in the background of these stories, which are edited and very capably translated by Joanne Turnbull.