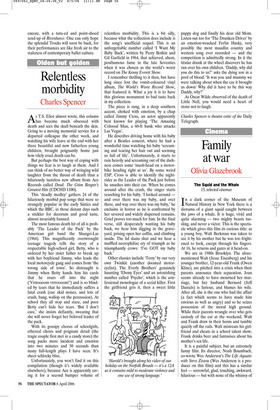 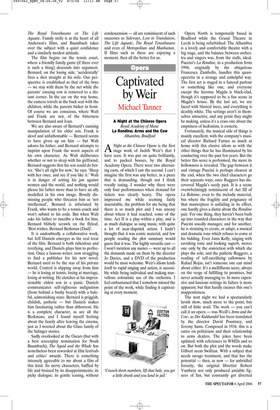 The Squid and the Whale 15, selected cinemas In a dark corner of the Museum of Natural History in New York there is a diorama of a giant squid caught between the jaws of a whale. It is huge, vivid and quite alarming — two mighty beasts tussling, and never a victor. This is the spectacle which gives this film its curious title: as a young boy, Walt Berkman was taken to see it by his mother but he was too frightened to look, except through his fingers. At 16, he returns and gazes at it head-on.

We are in 1980s Brooklyn. The aforementioned Walt (Jesse Eisenberg) and his younger brother, 12-year-old Frank (Owen Kline), are pitched into a crisis when their parents announce their separation. Joan seems already to have mourned her marriage, but her husband Bernard (Jeff Daniels) is furious, and blames his wife. After all, she is the one who had the affair (a fact which seems to have made him envious as well as angry) and so he seizes possession of the moral high ground. While their parents wrangle over who gets custody of the cat at the weekend, Walt and Frank draw in their horns and tumble quietly off the rails. Walt mistreats his girlfriend and cheats in a school talent show; Frank drinks beer and fantasises about his mother’s sex life.

It is a painful subject, but an extremely funny film. Its director, Noah Baumbach, co-wrote Wes Anderson’s The Life Aquatic with Steve Zissou (Wes Anderson is a producer on this film) and this has a similar feel — sorrowful, glad, touching, awkward, hilarious — but with none of the whimsy of The Royal Tenenbaums or The Life Aquatic. Family strife is at the heart of all Anderson’s films, and Baumbach takes over the subject with a quiet confidence and a similarly modest attitude.

The film begins on the tennis court, where a friendly family game (if there ever is such a thing) descends into argument. Bernard, on the losing side, ‘accidentally’ fires a shot straight at his wife. Our perspective is established as that of the boys — we stay with them by the net while the parents’ ensuing row is removed to a distant corner. In the car on the way home, the camera travels in the back seat with the children, while the parents bicker in front. Of course we are conscious, where Walt and Frank are not, of the bitterness between Bernard and Joan.

We are also aware of Bernard’s cunning manipulation of his elder son. Frank is aloof and unfathomable — Bernard seems to have given up on him — but Walt adores his father, and Bernard attempts to imprint upon Frank the worst aspects of his own character. As Walt deliberates whether or not to sleep with his girlfriend, Bernard suggests that his son could do better. ‘She’s all right for now,’ he says. ‘Sleep with her once, and see if you like it.’ Walt is in danger of setting his jaw against women and the world, and nothing would please his father more than to have an ally modelled in his own image. Bossily dismissing people who threaten him as ‘not intellectual’, Bernard is infuriated by Frank, who wants to be a tennis coach and won’t submit to his code. But when Walt asks his father to inscribe a book for him, Bernard blithely scrawls on the flyleaf, ‘Best wishes, Bernard Berkman (Dad)’.

It is undoubtedly a collaborative work, but Jeff Daniels emerges as the real treat of the film. Bernard is both ridiculous and terrifying, and Daniels plays him to perfection. Once a famous writer, now struggling to find a publisher for his new novel, Bernard used to be the star of his private world. Control is slipping away from him — he is losing at tennis, losing at marriage, losing at writing. He clutches at his impressionable eldest son in a panic. Daniels communicates self-righteous indignation (from behind a bushy beard) with a baleful, admonishing stare. Bernard is priggish, childish, pathetic — but Daniels makes him fascinating rather than abhorrent. He is a complete character, as are all the Berkmans, and I found myself fretting about the family after leaving the cinema, just as I worried about the Glass family of the Salinger stories.

Sadly overlooked at the Oscars (but with a best screenplay nomination for Noah Baumbach), The Squid and the Whale has nonetheless been rewarded at film festivals and critics’ awards. There is something intensely agreeable to me about a film of this kind. Its nervy characters, baffled by life and bruised by its disappointments; its picky dialogue; its gentle teasing, without condescension — all are reminiscent of such successes as Sideways, Lost in Translation, The Life Aquatic, The Royal Tenenbaums and even of Metropolitan and Manhattan. If films such as these are enjoying a moment, then all the better for us.