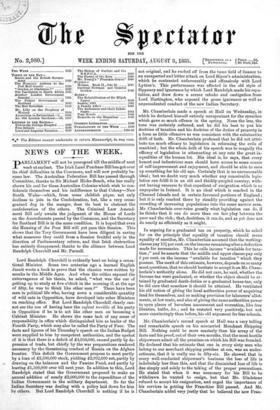 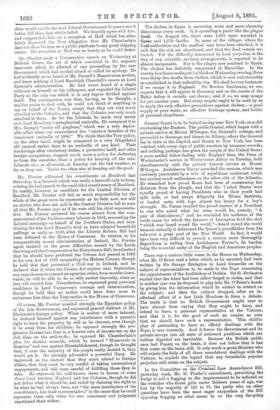 Mr. Chamberlain's second speech at Hull was a very telling

and remarkable speech on his miscarried Merchant Shipping Bill. Nothing could be more masterly than his array of the facts and his proof, out of their own months, that the most hostile shipowners admit all the premises on which his Bill was founded. He declared that his estimate that one in every sixty men who belong to our merchant shipping perishes at sea, was an under- estimate, that it is really one in fifty-six. He showed that in every well-conducted shipowner's business the loss of life is indefinitely less than this, and that the diminished loss of life is due simply and solely to the taking of the proper precautions. He stated that when it was necessary for his Bill to be withdrawn he wanted to resign, but that Mr. Gladstone refused to accept his resignation, and urged the importance of his services in getting the Franchise Bill passed. And Mr. Chamberlain added very justly that he believed the new Fran-

chise would enable the next Liberal Government to pass a much better Bill than that which failed. We heartily agree with him, and congratulate him on a reception at Hull which has abao- lately disproved the Tory allegation that Mr. Chamberlain dare not show his face on a public platform in any great shipping centre. His reception at Hull was as hearty as he could desire.