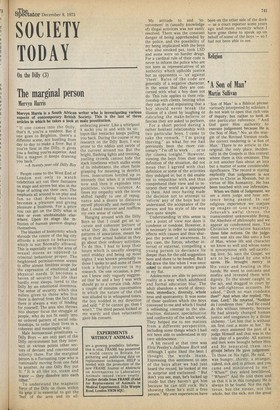 Mervyn Harris is a South African writer who is investigating various aspects of contemporary British Society. This is the last of three articles in which he takes a look at male prostitution.

"If one comes into the Dilly, that's it, you're a resident. But. if one goes to Brighton, there's a different scene, not hustling from day to day to make a fiver. But if you're first in the Dilly, it gives you a feeling you're. superior. And like a magnet it keeps drawing you back." —A twenty-year-old Dilly Boy People come to the West End of London not only to watch celebrities act out their fantasies on stage and screen but also in the hope of acting out their own. The emphasis all around is on play and fun so that doing business becomes a pleasure and giving pleasure a business. For a price You can get on the Dilly what is rare or even unobtainable elsewhere. Upon its stage the infinities of human passion display themselves.

The blanket of tmonymity which

• shrouds the centre of the big city affords a screen to behaviour which is not hormally allowed. This is especially so in the area of sexual mores as opposed to criminal .behaviour proper. The heightened permissiveness seems to offer almost limitless scope for the expression of emotional and physical needs. It becomes a haven of security for life that hardly ever sleeps, lured to the Dilly by an emotional insomnia. The sense of security which this milieu gives to those who live there is derived from the fact that there is always a way of fending for yourself. The area also throws into sharper focus the struggle of people, who do not fit easily into an ordered pattern of social relationships, to order their lives in a coherent and meaningful way.

Male homosexual prostitutes — Dilly Boys — are only part of the Dilly environment but they intersect at various points other sectors of deviant and conventional activity there. For the marginal person is a fluctuating type who is continually moving from one field to another. As one Dilly Boy put it: "It is all like ice, steam and water — they dissolve into each Other,"

embracing power. Like a whirlpool it sucks you in and with its octopus-like tentacles keeps pulling you back. During the course of my research on the Dilly Boys, I was prone to the eddies and swirls of the current around me. But the bright, flashing lights and teeming, jostling crowds cannot hide the stark loneliness which stalks some of its inhabitants, the often futile grasping for meaning in derelict lives, insecurities bottled up so intensely that when it is released now and then it explodes into pointless, vicious violence. At times my empathy with the scene shifted rapidly to one of repugnance and a desire to distance myself physically and mentally so that I could recover and reaffirm my own sense of values. Hanging around with the Dilly Boys so that I could get an accurate, and coherent 'picture of what they do, their values and patterns of association, meant being in their actual habitat as they go about their ordinary activities. To do this, 1 had to keep their hours which is usually sleeping until midday and being up most nights. I was known personally to those I spoke to and some of them took a helpful interest in my research. On one occasion, a person I knew only vaguely suggested that he and a boy I was with should go to a certain club. After a couple of minutes conversation in which the nature of the club was alluded to in whispered tones, the boy nodded in my direction and said: "If he cannot go, then I won't." The third person looked at me warily and then reluctantly gave his consent. My attitude to and 'involvement' in (usually knowledge of) illegal activities was not easily resolved. There was the constant danger of being apprehended by the police, and the possibility of my being implicated with the boys who also smoked pot, took LSD and some were on harder drugs.

For a cardinal rule of their code is never to inform the police who are not seen as representatives of an authority which upholds justice but as opponents — 'us' against 'them'. Rules of the code are generally of a negative character, in the sense that they are con cerned with what a boy does not do. This rule applies to their relationship with clients, limiting what they can do and stipulating that a boy should never break the illusion of a client by laughing or ridiculing the make-believe or fancies they are asked to perform. For a short period during a rather hesitant relationship with two particular boys, I came to take the remark, I'm going thieving," as what for me had previously been the more cus tomary "I'm off to work. . . or to the cinema tonight." However, viewing the boys from their own definition of the situation, did not mean that I agreed with that definition or some of the activities they indulged in; but it did enable me to empathise with, and thus comprehend their view and to interpret their world as it appeared to them. And once having made the decision not to attempt to ' 'reform' any of the boys but to understand, the acceptance of the person and his style of life was then quite simple.

Understanding in this sense is not a point of view nor does it condemn or condone. However, it is necessary in order to anticipate effects with causes and thus shar pen the power of awareness. In any case, the forces, whether internal or external, compelling a young person to deviance lie deeper than for the odd suggestion here and there to be heeded. But I did draw the line when I was once asked to store some stolen goods in my flat.

Adolescents are able to perceive reality in a way which adulthood and formal education blur. The adult abandons a world of direct ness, immediacy, diversity, whole ness and spontaneity. It was some of these qualities which the boys conveyed to me and which I found a refreshing contrast to the abs traction, distance, specialisation and conformity of the adult world.

They helped me to see matters from a different perspective, including some things which I had not been able to understand in my own adolescence.

although I quite liked the beat I thought the words inane. Expressing this sentiment to one of the boys after we had just heard the record, he looked at me in surprise and exclaimed: "But don't you see, man, he's locked up inside but they haven't got him because he can still rock. He's showing them he's still a free person." My own experiences have been on the other side of the dock — as a court reporter some years ago anclimore recently when I have gone there to speak up on behalf of some of the boys '— so I had not been able to see.