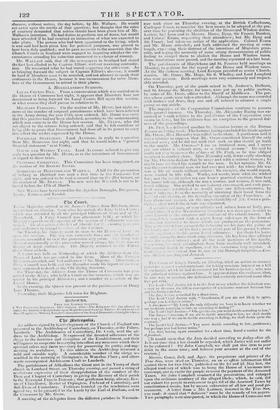 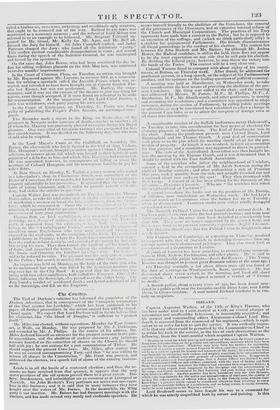 to recover penalties a aao a a coal-merehant or taking usurious intereat on a bill of exchai mge. wheli he laud discounted for his brother-in-law ; Ash() was he priticip:ti AV iii lesS against him. Jr appeared from time evidence, that, or one Way or another, the defendant had certainly received more than live per cent. The Lortl itistire left it to the Jury to say whether the defendant conto tli-wount the bill in consequence of a usurious contract between hint and his bloth,l-in-law.

'flue Lord Chief Justice—" You must decide according to law, gentlemen; but perhaps you had better retire." The Jury having again consulted ler a short time, found a verdict for the

(It would seem that the Jury decided according to feeling after all. Is it not tune that a law should be repealed, which Juries will not suffer to be enforced ? Sir John Campbell, we shall put this item to your debit in the mean time; and balance your account at the end of the session.] Messrs. Grant, Bell, and Ager, the proprietors and printer of the 7'rue Sun, were tried on Thursday, on an ex qtficio information filed against them for two libels, published on the 1st and '2(1 May last, the alleged tendancy of which was to bring the House of COMMODS into contempt, and to excite the people to resist the payment of the Assessed Taxes. Sir John Campbell conducted the prosecution, and enlarged upon the seditious tendency of the alleged libels; which, be said, did not exhort the people to endear eur to get rid of the Assessed 'lazes by constitutional means, but by means subversive of all law and good government. A letter from a Mr. Lorimer, inserted in the True Sun, was read: it stated that " defiance" must be the remedy of tax-payers. Two paragraphs were also quoted, in which the House of Comuions was

called a loathsome, venomous, sickening, and revoltingly ugly creature, that ought to be removed out of the way. Refusal to pay taxes was mentioned as a necessary measure ; and the refusal of Lord Milton was referred to as an example to be followed. Mr. Sergeant TaIfourd appeared for Mr. Grant, Mr. Kelly for Mr. Ager, and Mr. Bell addressed the Jury for himself. Sir John Campbell replied, and Judge Patteson charged the Jury; who found all the defendants "guilty." This verdict excited considerable disapprobation in court ; and several times during the speech of the Solicitor-General, be was interrupted and hissed by the spectators.

On the same day, John Reeve, who had been convicted the day before for selling seditious placards on the 10th May last, was sentenced to twelve months' imprisonment.

In the Court of Common Pleas, on Tuesday, an action was brought by Mr. Raymond against Mr. Laporte, to recover 1001. as a reinutieration for writing a spectacle called the Invisible Prince, which was accepted, and intended to have been brought out at Covent Garden Theatre last Easter, but was not performed. Mr. Bartley, the stagemanager, said it was not the custom of the theatre to give any thing for apiece, even though accepted, if it were found on rehearsal to be unfit for representation. At the suggestion of the Lord Chief Justice, a juror was withdrawn, each party paying his own costs.

In the Court of Exchequer, on Thursday, C. Penny was found guilty of publishing the People's Police Gazelle, an unstamped news • paper. The Recorder made a report to the King, on Wednasday, of the prisoners in Newgate under sentence of deatla—twelve in minther ; all of whom his Majesty was graciously pleased to respite during his Royal pleasure. One case (that of Gregorio Guinea) was postponed tor further consideration. It was decided on the following day, that this limn should also be respited.

In the Lord Mayor's Court at the Guildhall, on Saturday, Mr. Barnes, the silversmith who lately floured in the trial of Ann Vickers, Mrs. Hampton's servant, brought MI action against Colonel I lampton's solicitors, to recover about 05/. which was lodged in their hands, in part payment of a debt due to hi in, and which Mrs. Hampton had contracted. fle was nonsuited, however, in consequence of filling to prove the marriage of Colonel Hampton, and his consequent liability to pay his wife's debts.

At Bow Street, on Monday, E. Taylor, a your, woman who waited in a haberdasher's shop in Cranbourno Street, was co:omitted to the "Luse of Correction for two months, for having some of her employer's property unlawfully in her possessiou. It appeared that she xvas in the habit of taking laudanum, and, in order to provide her, elf with this drug, had soden the articles in question.

Captain Walter Joss was committed, on Tuiesd.:::. from the Th Police-oflice, to take his trial at the next tairalty aiasa too -a of murdering it seaman on hourd the brig from

oialtt. it appeared from the (Nit-lc:n.0, a larg • 1,o,iy .. ho belong to the " whippers' Ultima" assetoldi d tor the pmpost• of . assaulting some Englishmen who wit) were coot! .yed Ity a ;mason • engaged in the coal-trade, to the exclusion tO. tl ii Irish. Theo at taciied

puldiehouse in Stepney, where the Enoli-limen reeei veil their magas, beat the roal-merchant severely, and carried elf the money lie fiat!

Iffin to pay his men. They then turned the landh•rd his family out of doors, and ransacked the house, brea!,:ing the windews, tearing no the floors, and throwing the furniture into the s. rect. The

said to be reduced to ruins. The pri=oner was the only persan ,.cured by tlie Police ; but search is making after some other lit 'lea

An inquest was held on Monday, on the body of the little girl, who, RR we mentioned last week, was killed by the Sovereign °mune', passing over her in the City Road. It appeared that the Sovereimi wos racing with two other omnibuses, both called the Emperor. One of the latter, following the Sovereign, also passed over the child's body. The Jury found a verdict of accidental death ; and levied a deodand of 411/. on the Sovereign, and 23/. on the Emperor.