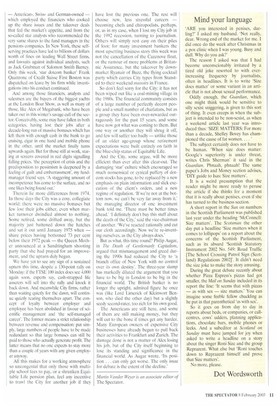 'ARE you interested in penises, darling?' I asked my husband. 'Not really, dear. Wrong end of the market for me. I did once do the week after Christmas in a pox clinic when I was young. Busy and dull. Why do you ask?'

The reason I asked was that I had become unconscionably irritated by a tired old joke resorted to with everincreasing frequency by journalists, often in headlines. It is to write 'Size does matter' or some variant in an article that is not about sexual performance.

Oddly enough, the Guardian, which one might think would be sensitive to silly sexist sniggering, is given to this sort of thing. It even creeps in when the subject is intended to be non-sexist, as when a weekend article last year was introduced thus: 'SIZE MA ITERS: For more than a decade, Shelley Bovey has championed the cause of fat women.

The subject certainly does not have to be human. 'When size does matter: Google's superiority is under threat, writes Chris Sherman' it said in the Guardian. Phnaah, phnaah! The same paper's Jobs and Money section advises, 'DIY guide to Isas: Size matters'.

It is a weird presumption that the reader might be more ready to peruse the article if she thinks for a moment that it is really about penises, even if she has turned to the business section.

A short report in the Sun on numbers in the Scottish Parliament was published last year under the heading 'McConnell: Size matters'. The Scotsman the other day put a headline 'Size matters when it comes to lollipops' on a report about the concerns of the Scottish Parliament, such as its absurd 'Scottish Statutory Instrument 2002 No. 549: Road Traffic [The School Crossing Patrol Sign (Scotland) Regulations 2002]'. It didn't need the size joke to make the story amusing.

During the great debate recently about whether Pizza Express's pizzas had got smaller, the Mail on Sunday included in its report the line: 'It seems that with pizzas — as with sex — size matters.' You can imagine some feeble fellow chuckling as he put in that parenthetical 'as with sex'.

So it goes on from day to day in reports about beds, or companies, or call centres, cows' udders, planning applica tions, chocolate bars, mobile phones or leeks. And a subeditor at Scotland on Sunday must have jumped for joy when asked to write a headline on a story about the singer Roni Size and the group Reprazent. What else but `Roni touches down to Reprazent himself and prove that Size matters'.