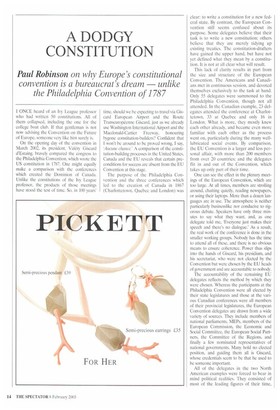 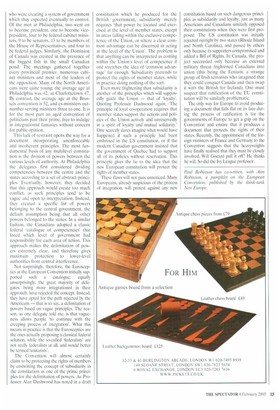 Paul Robinson on why Europe's constitutional

convention is a bureaucrat's dream — unlike the Philadelphia Convention of 1787

I ONCE heard of an Ivy League professor who had written 50 constitutions. All of them collapsed, including the one for the college boat club. If that gentleman is not now advising the Convention on the Future of Europe, someone very like him surely is.

On the opening day of the convention in March 2002, its president, Valety Giscard d'Estaing, bravely compared the congress to the Philadelphia Convention, which wrote the US constitution in 1787. One might equally make a comparison with the conferences which created the Dominion of Canada. Unlike the constitutions of the Ivy League professor, the products of those meetings have stood the test of time. So, in 100 years'

time, should we be expecting to travel via Giscard European Airport and the Route Transeuropeenne Giscard, just as we already use Washington International Airport and the Macdonald-Carticr Freeway, honouring bygone constitution-builders? Confident that I won't he around to be proved wrong, I say, Aucane chance.' A comparison of the constitution-building processes in the United States, Canada and the EU reveals that certain preconditions for success are absent from the EU Convention at this stage.

The purpose of the Philadelphia Convention and the three conferences which led to the creation of Canada in 1867 (Charlottetown, Quebec and London) was clear: to write a constitution for a new federal state. By contrast, the European Convention still seems confused about its purpose. Some delegates believe that their task is to write a new constitution; others believe that they are merely tidying up existing treaties. The constitution-drafters have gained the upper hand, but have not yet defined what they mean by a constitution. It is not at all clear what will result.

This lack of clarity results in part from the size and structure of the European Convention. The Americans and Canadians met in continuous session, and devoted themselves exclusively to the task at hand. Only 55 delegates were summoned to the Philadelphia Convention, though not all attended. In the Canadian example, 23 delegates attended the conference at Charlottetown, 33 at Quebec and only 16 in London. What is more, they mostly knew each other already, and became even more familiar with each other as the process went on, particularly during the many welllubricated social events. By comparison, the Ell Convention is a larger and less personal affair, with more than 200 members from over 20 countries; and the delegates flit in and out of the Convention, which takes up only part of their time.

One can see the effect in the plenary meetings of the European Convention, which are too large. At all times, members are strolling around, chatting quietly, reading newspapers, or using their laptops. More than a dozen languages are in use. The atmosphere is neither particularly businesslike nor conducive to rigorous debate. Speakers have only three minutes to say what they want, and, as one delegate told me, 'Even/one just makes their speech and there's no dialogue.' As a result, the real work of the conference is done in the smaller working groups. Nobody has the time to attend all of these, and there is no obvious means to ensure coherence. Power thus slips into the hands of Giscard, his presidium, and his secretariat, who were not elected by the Convention but were chosen by the EU heads of government and are accountable to nobody.

The accountability of the remaining EU delegates reflects the method by which they were chosen. Whereas the participants at the Philadelphia Convention were all elected by their state legislatures and those at the various Canadian conferences were all members of their provincial legislatures, the European Convention delegates are drawn from a wide variety of sources. They include members of national parliaments, MEPs, members of the European Commission, the Economic and Social Committee, the European Social Partners, the Committee of the Regions, and finally a few nominated representatives of national governments. Many hold no elected position, and guiding them all is Giscard, whose credentials seem to be that he used to be someone important.

All of the delegates in the two North American examples were forced to bear in mind political realities. They consisted of most of the leading figures of their time,

who were creating a system of government which they expected eventually to control. Of the men at Philadelphia, two went on to become president, one to become vicepresident, four to be federal cabinet ministers, 9 to be senators, 13 to be members of the House of Representatives, and four to be federal judges. Similarly, the Dominion of Canada was created in the presence of the biggest fish in the small Canadian pond. The meetings gathered together every provincial premier, numerous cabinet ministers and most of the leaders of the opposition. Many of the North Americans were quite young; the average age at Philadelphia was 42, at Charlottetown 47. By contrast, the average age at the Brussels convention is 52, and ex-ministers outnumber serving ministers three to one. It is for the most part an aged convention of politicians past their prime, free to indulge in integrationist fantasies without concern for public opinion.

This lack of restraint opens the way for a document incorporating unenforceable and incoherent principles. The most fundamental basis of any multilevel constitution is the division of powers between the various levels of authority. At Philadelphia the delegates first considered dividing competencies between the centre and the states according to a set of abstract principles. Eventually, however, they decided that this approach would create too much conflict, as such principles tend to be vague and open to interpretation. Instead, they created a specific list of powers belonging to the central government, the default assumption being that all other powers belonged to the states. In a similar fashion, the Canadians adopted a classic federal 'catalogue of competencies' that listed which level of government had responsibility for each area of action, This approach makes the delimitation of powers extremely clear, and therefore gives maximum protection to lower-level authorities from central interference.

Not surprisingly, therefore, the Eurosceptics at the European Convention initially supported such a catalogue; equally unsurprisingly, the great majority of delegates, being more integrationist in their approach, have rejected the concept. Instead, they have opted for the path rejected by the Americans — that is to say, a delimitation of powers based on vague principles. The reason, as one delegate told me, is that vagueness allows people to continue with the creeping process of integration'. What this means in practice is that the Eurosceptics are the ones actually proposing a classical federal solution, while the so-called 'federalists' are not really federalists at all, and would better be termed 'unitarists'.

The Convention will almost certainly claim to be protecting the rights of members by enshrining the concept of subsidiarity in the constitution as one of the prime principles for the delimitation of powers. As Professor Alan Dashwood has noted in a draft constitution which he produced for the British government, subsidiarity merely requires that power be located and exercised at the level of member states, except in areas falling within the exclusive competence of the Union, or where a clear common advantage can he discerned in acting at the level of the Union'. The problem is that anything can be interpreted as coming within the Union's level of competence if one stretches the idea of 'common advantage' far enough. Subsidiarity pretends to protect the rights of member states, while in practice doing nothing of the sort.

Even more frightening than subsidiarity is another of the principles which will supposedly guide the Union — that of 'loyalty'. Quoting Professor Dashvvood again, 'The principle of loyal co-operation requires that member states support the actions and policies of the Union actively and unreservedly in a spirit of loyalty and mutual solidarity.' One scarcely dares imagine what would have happened if such a principle had been enshrined in the US constitution, or if the modern Canadian government insisted that the government of Quebec had to support all of its policies without reservation. This principle gives the lie to the idea that the new European constitution will protect the rights of member states.

These flaws will not pass unnoticed. Many Europeans, already suspicious of the process of integration, will protest against any new constitution based on such dangerous principles as subsidiarity and loyalty, just as many Americans and Canadians similarly opposed their constitutions when they were first proposed. The US constitution was initially rejected outright by two states (Rhode Island and North Carolina), and passed by others only because its supporters compromised and added a Bill of Rights. In Canada, the project succeeded only because an external military threat frightened Canadians into union (this being the Lenians, a strange group of Irish terrorists who imagined that they could conquer Canada and then swap it with the British for Ireland). One must suspect that ratification of the EU constitution will be similarly problematic.

The only way for Europe to avoid producing a document that falls flat on its face during the process of ratification is for the governments of Europe to get a grip on the Convention and ensure that it produces a document that protects the rights of their states. Recently, the appointment of the foreign ministers of France and Germany to the Convention suggests that the heavyweights have finally realised that they must be closely involved. Will Giscard pull it off? He thinks he will. So did the Ivy League professor.

Paul Robinson has co-written, with Ann Robinson, a pamphlet on the European Convention, published by the think-tank New Europe.