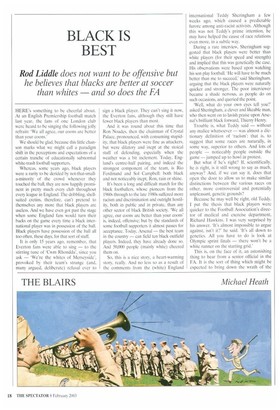 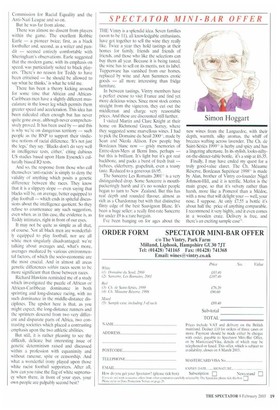 Rod Liddle does not want to be offensive but

HERE's something to he cheerful about. At an English Premiership football match last year. the fans of one London club were heard to be singing the following jolly refrain: 'We all agree, our coons are better than your coons.'

We should be glad, because this little chanson marks what we might call a paradigm shift in the perceptions and expectations of a certain tranche of educationally subnormal white-trash football supporters.

Whereas. some years ago, black players were a rarity to be derided by not-that-smalla-minority of the crowd whenever they touched the ball, they are now happily prominent in pretty much every club throughout every league in England. The dribbling, shellsuited cretins, therefore, can't pretend to themselves any more that black players are useless. And we have even got past the stage when some England fans would turn their backs on the game every time a black international player was in possession of the ball. Black players have possession of the ball all too often, these days, for that sort of stuff.

It is only 15 years ago, remember, that Everton fans were able to sing — to the stirring tune of `Cwm Rhondda', since you ask — 'We're the whites of Merseyside', provoked by their team's strange (and, many argued, deliberate) refusal ever to sign a black player. They can't sing it now, the Everton fans, although they still have fewer black players than most.

And it was round about this time that Ron Noades. then the chairman of Crystal Palace, pronounced, with consuming stupidity, that black players were fine as attackers, but were dilatory and inept at the stoical stuff of defending, especially when the weather was a bit inclement. Today, England's centre-half pairing, and indeed the strongest component of the team, is Rio Ferdinand and Sol Campbell: both black and not noticeably inept, Ron, rain or shine.

It's been a long and difficult march for the black footballers, whose pioneers from the 1960s through to the late 1980s suffered more racism and discrimination and outright hostility, both in public and in private, than any other sector of black British society. 'We all agree, our coons are better than your coons' is, indeed, offensive; but by the standards of some football supporters it almost passes for acceptance. Today, Arsenal — the best team in the country — can field ten black outfield players. Indeed, they have already done so. And 50,000 people (mainly white) cheered them on.

So, this is a nice story, a heart-warming story, really. And no less so as a result of the comments from the (white) England international Teddy Sheringham a few weeks ago, which caused a predictable furore among anti-racist activists. Although this was not Teddy's prime intention, he may have helped the cause of race relations even more, in a subtle way.

During a rare interview, She ringham suggested that black players were better than white players (for their speed and strength) and implied that this was genetically the case. His observations were based upon watching his son play football. 'He will have to be much better than me to succeed,' said Sheringharn, arguing that the black players were naturally quicker and stronger. The poor interviewer became a shade nervous, as people do on such occasions, and queried the point.

'Well, what do your own eyes tell you?' asked Sheringharn, a clever and likeable man, who then went on to lavish praise upon Arsenal's brilliant black forward, Thierry Henry.

Trouble is, what Teddy said — without any malice whatsoever — was almost a dictionary definition of 'racism': that is, to suggest that some races are naturally, in some way, superior to others. And lots of people — noticeably people outside the game —jumped up to howl in protest.

But what if he's right? If, scientifically, he is right, is it still wrong to say as much, anyway? And, if we can say it, does that open the door to allow us to make similar distinctions between the various races on other, more controversial and potentially unpleasant, genetic grounds?

Because he may well be right, old Teddy. I put the thesis that black players were quicker to the Football Association's director of medical and exercise department, Richard Hawkins, I was very surprised by his answer. 'It's almost impossible to argue against, isn't it?' he said. 'It's all down to genetics. All you have to do is look at Olympic sprint finals — there won't be a white runner on the starting grid.'

This is, on the face of it, an astonishing thing to hear from a senior official in the FA. It is the sort of thing which might be expected to bring down the wrath of the

Commission for Racial Equality and the Anti-Nazi League and so on.

But he was far from alone.

There was almost no dissent from players within the game. The excellent Robbie Earle — a pioneer twice; first, as a black footballer and, second, as a writer and pundit — seemed entirely comfortable with Sheringham's observations. Earle suggested that the modern game, with its emphasis on speed, was particularly suited to black players. 'There's no reason for Teddy to have been criticised — he should be allowed to say what he thinks,' is what he told me.

There has been a theory kicking around for some time that African and AfricanCaribbean men have a slightly different musculature in the lower leg which permits them greater speed and acceleration. This idea has been ridiculed often enough but has never quite gone away, although never comprehensively proved. It has been used by — and this is why we're on dangerous territory — such people as the BNP to support their vindictive notions of racial difference. 'It's not just the legs,' they say. 'Blacks don't do very well in intelligence tests, either,' citing dubious US studies based upon Hans Eysenck's culturally biased IQ tests.

And so, the response from those who call themselves 'anti-racists' is simply to deny the validity of anything which posits a genetic difference between the races. They know that it is a slippery slope — even saying that blacks will be, on average, better equipped to play football — which ends in spiteful discussions about the intelligence quotient. So they refuse to countenance any such suggestion, even when, as in this case, the evidence is, as Teddy intimates, right in front of our eyes.

It may not be quite as simple as all that, of course. Not all black men are wonderfully equipped to play football, nor are all white men singularly disadvantaged: we're talking about averages and, what's more, averages mediated by various environmental factors, of which the socio-economic are the most crucial. And in almost all areas genetic differences within races seem to be more significant than those between races.

Richard Hawkins reminded me of a study which investigated the puzzle of African or African-Caribbean dominance in both sprinting and long-distance racing, with no such dominance in the middle-distance disciplines. The upshot here is that, as you might expect, the long-distance runners and the sprinters descend from two very different and disparate parts of Africa, two contrasting societies which placed a contrasting emphasis upon the two athletic abilities.

But still, it is rather pleasing to see the difficult, delicate but interesting issue of genetic determinism raised and discussed within a profession with equanimity and without rancour, spite or censorship. And what a wonderful irony played upon those white racist football supporters. After all, how can you raise the flag of white supremacy when there, in front of your eyes, your own people are palpably second best? THE Vinny is a splendid idea. Seven families (soon to be 11), all knowledgable enthusiasts, have got together to sell the wine they really like. Twice a year they hold tastings at their homes for family, friends and friends of friends, and those who like the selections can buy them all year. Because it is being tasted, the wine has to sell on its merits, not its label. Tupperware has vanished from our homes, replaced by wine and Ann Summers erotic goods — all more interesting than fridge furniture.

In between tastings, Vintry members have a perfect excuse to visit France and find yet more delicious wines. Since most stock comes straight from the vigneron, they cut out the middleman and charge very reasonable prices. And these are discounted still further.

I visited Martin and Clare Knight at their home on Richmond Green, Surrey, where they suggested some marvellous wines. I had to pick the Domaine du Seuil 2000, made by Sean and Nicola Allison. Few people buy Bordeaux blanc now — grisly memories of Entre-deux-Mers at Berni Inns. perhaps — but this is brilliant. It's light but it's got real backbone, and packs a burst of fresh fruit — lychees, elderberry, grapefruit, even a toasty taste. Reduced to a generous £6.95.

The Sancerre Les Romains 200F is a very distinguished drop. Some Sancerre is mouthpuckeringly harsh and it's no wonder people began to turn to New Zealand. But this has real depth and rounded flavour, almost as rich as a Chardonnay but with that distinctive flinty edge of the best Sauvignon Blanc. It's been a huge seller; a really first-rate Sancerre for under £9 is a rare bargain.

I've been banging on for ages about the

new wines from the Languedoc, with their depth, warmth, silky aromas, the whiff of breezes wafting across lavender. The Ch. de Saint-Series 1999'1 is herby and spicy and has a lingering aftertaste. In its stylish, looks-niftyon-the-dinner-table bottle, it's a snip at £6.35.

Finally, I may have ended my quest for a truly good-value claret. The Ch. Meaume Reserve, Bordeaux Superieur 1998"' is made by Alan, brother of Vintry co-founder Nigel Johnson-Hill, and it is terrific. Merlot is the main grape, so that it's velvety rather than harsh, more like a Pomerol than a Medoc, with a nose that will delight your — well, your nose, I suppose. At only £7.55 a bottle it's about half the price of anything comparable. I recommend it very highly, and it even comes in a wooden crate. Delivery is free, and there's an exciting sample case'''.