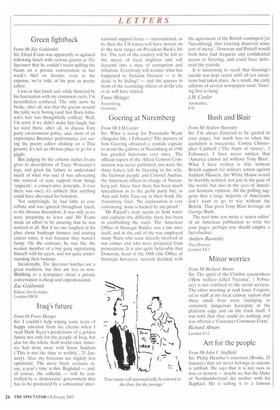 From Mr Zac Goldsmith Sir: Lloyd Evans was apparently so agitated following lunch with various greens at The Spectator that he couldn't resist spilling the beans on a private conversation in last week's Mail on Sunday, even at the expense, we're told, of his post as poetry editor.

I was at that lunch and, while flattered by his fascination with my cinnamon curls, I'm nevertheless confused. The only news he broke, after all, was that the greens around the table were boring (and that Boris Johnson's hair was thoughtfully coiffed). Well, I'm sorry if we didn't make him laugh, but we were there, after all, to discuss Tory party environment policy, and, short of an impromptu Bremner performance (or seeing the poetry editor choking on a Thai prawn), it's not an obvious place to go for a giggle.

But judging by the column inches Evans gives to descriptions of Tracy Worcester's legs, and given his failure to understand much of what was said (I was advocating the removal of state support from things `ungreen'; a conservative principle, if ever there was one), it's unlikely that anything could have alleviated his boredom.

Not surprisingly, he had little to contribute and was ignored throughout lunch, to his obvious discomfort. It was only as we were preparing to leave and Mr Evans made an effort to be amusing that he was noticed at all. But if no one laughed at his jibes about bankrupt farmers and soaring cancer rates, it was because they weren't funny. On the contrary, he was like the weaker member of a boy gang ingratiating himself with his peers, and not quite understanding their humour.

Incidentally, The Spectator lunches are a great tradition, but they are less so now. Blabbing to a newspaper about a private conversation is cheap and unprofessional.