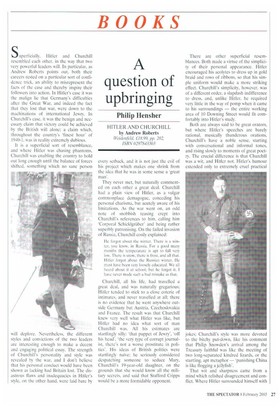 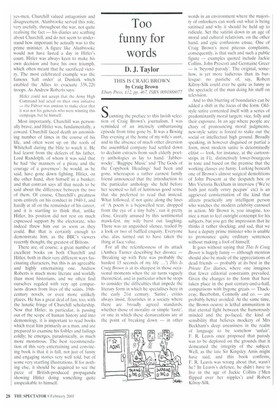 HITLER AND CHURCHILL by Andrew Roberts Weidenfeld, £18.99, pp. 202, ISBN 0297843303 Superficially, Hitler and Churchill resembled each other, in the way that two very powerful leaders will. In particular, as Andrew Roberts points out, both their careers rested on a particular sort of confidence trick, an ability to misrepresent the facts of the case and thereby inspire their followers into action. In Hitler's case it was the malign lie that Germany's difficulties after the Great War, and indeed the fact that they lost that war, were down to the machinations of international Jewry. In Churchill's case, it was the benign and necessary claim that victory could be achieved by the British will alone; a claim which, throughout the country's 'finest hour' of 1940-1, was in reality extremely dubious.

It is a superficial sort of resemblance, and where Hitler was chasing phantoms, Churchill was enabling the country to hold out long enough until the balance of forces shifted. something which no sane person will deplore. Nevertheless, the different styles and convictions of the two leaders are interesting enough to make a decent and engaging political essay. The strength of Churchill's personality and style was revealed by the war, and I don't believe that his personal conduct would have been shown as lacking had Britain lost. The disastrous flaws and inadequacies in Hitler's style, on the other hand, were laid bare by every setback, and it is not just the evil of his project which makes one shrink from the idea that he was in some sense a 'great man'.

They never met, but naturally commented on each other a great deal. Churchill had a plain view of Hitler, as a vulgar commonplace demagogue, conceding his personal charisma, but acutely aware of his limitations. As the war went on, an odd note of snobbish teasing crept into Churchill's references to him, calling him 'Corporal Schicklgrilber' and being rather superbly patronising. On the failed invasion of Russia, Churchill cosily explained:

He forgot ahout the winter. There is a winter, you know. in Russia. For a good many months the temperature is apt to fall very low. There is snow, there is frost, and all that. Hitler forgot about the Russian winter. He must have been very loosely educated. We all heard about it at school; but he forgot it. I have never made such a bad mistake as that.

Churchill, all his life, had travelled a great deal, and was naturally gregarious; Hitler tended to stick to a close coterie of intimates, and never travelled at all; there is no evidence that he went anywhere outside Germany but Austria, Czechoslovakia and France. The result was that Churchill knew very well what Hitler was like, but Hitler had no idea what sort of man Churchill was. All his estimates are startlingly silly: that puppet of Jewry', 'off his head', 'the very type of corrupt journalist, there's not a worse prostitute in politics'. His ideas of British politics were startlingly naïve; he seriously considered despatching someone to seduce Mary, Churchill's 19-year-old daughter, on the grounds that she would know all the military secrets, and said that Stafford Cripps would be a more formidable opponent. There are other superficial resemblances. Both made a virtue of the simplicity of their personal appearance. Hitler encouraged his acolytes to dress up in gold braid and rows of ribbons, so that his simple uniform would make a more striking effect. Churchill's simplicity, however, was of a different order, a slapdash indifference to dress, and, unlike Hitler, he required very little in the way of pomp when it came to his surroundings — the entire working area of 10 Downing Street would fit comfortably into Hitler's study.

Both are always said to be great orators, but where Hitler's speeches are barely rational, musically thunderous orations, Churchill's have a noble sense, starting with conversational and informal tones, and rising slowly to moments of great poetry. The crucial difference is that Churchill was a wit, and Hitler not. Hitler's humour extended only to extremely cruel practical jokes; Churchill's style was more devoted to the bitchy put-down, like his comment that Philip Snowden's arrival among the Treasury faithful was like the meeting of two long-separated kindred lizards, or the startling, apt metaphor — 'punishing China is like flogging a jellyfish'.

That wit and sharpness came from a mind which relished disagreement and conflict. Where Hitler surrounded himself with yes-men, Churchill valued antagonism and disagreement. Alanbrooke served this role, very usefully, throughout the war, not quite realising the fact — his diaries are scathing about Churchill, and do not seem to understand how important he actually was to the prime minister. A figure like Alanbrooke would not have lasted a day in Hitler's court. Hitler was always keen to make his own decision and have his own triumph, which often meant that he sacrificed victory. The most celebrated example was the famous 'halt order' at Dunkirk which enabled the Allies to evacuate 338,226 troops. As Andrew Roberts says:

Hitler could not accept that the Army High Command had acted on their own initiative — the Fithrer was anxious to make clear that it was not his generals who were winning this campaign, but he himself.

Most importantly, Churchill was personally brave, and Hitler was, fundamentally, a coward. Churchill faced death an astonishing number of times in the course of his life, and often went up on the roofs of Whitehall during the blitz to watch it. He had learnt from the defects of his father, Lord Randolph, of whom it was said that he had 'the manners of a pirate and the courage of a governess'; he would, as he said, have gone down fighting. Hitler, on the other hand, shot himself in a bunker; and that contrast says all that needs to be said about the difference between the two of them. Of course, Churchill's greatness rests entirely on his conduct in 1940-1, and hardly at all on the remainder of his career, and it is startling to think that, unlike Hitler, his position did not rest on much expressed support by the electorate, who indeed threw him out as soon as they could. But that is certainly enough to demonstrate him, as the BBC's viewers recently thought, the greatest of Britons.

There are, of course, a great number of excellent books on both Churchill and Hitler, both in their very different ways fascinating characters, but this is an agreeable and highly entertaining one. Andrew Roberts is much more literate and worldly than most historians, and we often find ourselves regaled with very apt comparisons drawn from lives of the saints. 19thcentury novels, or even more unlikely places. He has a great deal of fun, too, with the lunatic fringe of Churchill scholarship. Now that Hitler, in particular, is passing out of the scope of human history and into demonology, it is important to read books which treat him primarily as a man, and are prepared to examine his foibles and failings coldly; he emerges, paradoxically, as much more monstrous, The best recommendation of this very entertaining and convincing book is that it is full, not just of funny and engaging stories very' well told, but of some very startling illustrations. If for nothing else, it should be acquired to see the piece of British-produced propaganda showing Hitler doing something quite unspeakable to himself.