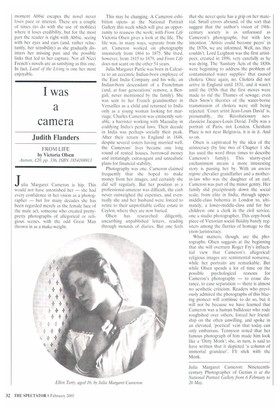 I was a camera

FROM LIFE by Victoria Olsen

Julia Margaret Cameron is hip. This would not have astonished her — she had every confidence in her vision as a photographer — but for many decades she has been regarded merely as the female face of the male act, someone who created prettypretty photographs of allegorical or religious scenes, with the odd Great Man thrown in as a make-weight.

This may be changing. A Cameron exhibition opens at the National Portrait Gallery this week which will give an opportunity to reassess the work; with From Life Victoria Olsen gives a look at the life. The life was, in many ways, separate from the art. Cameron worked on photography intensively from 1864 to 1875. She lived, however. from 1815 to 1879, and From Life does not scant on the other 54 years.

Julia Margaret Pattie was horn in Calcutta to an eccentric Indian-born employee of the East India Company and his wife, an Indian-born descendant of a Frenchman (and, at four generations' remove, a Bengali, never mentioned by the family). She was sent to her French grandmother in Versailles as a child and returned to India only as a young woman looking for marriage. Charles Cameron was eminently suitable, a barrister working with Macaulay in codifying India's penal laws. Their decade in India was perhaps socially their peak. After their return to England in 1848, despite several sisters having married well, the Camerons' lives became one long round of rented houses, borrowed money and irritatingly extravagant and unrealistic plans for financial stability.

Photography was one. Cameron claimed frequently that she hoped to make money from her images, and certainly she did sell regularly. But her position as a professional-amateur was difficult, the cash never outweighed the expenses, and eventually she and her husband were forced to retire to their unprofitable coffee estate in Ceylon, where they are now buried.

Olsen has researched diligently, unearthing unpublished letters, reading through mounds of diaries. But one feels that she never quite has a grip on her material. Small errors abound, of the sort that suggest that the author's vision of 19thcentury society is as unfocused as Cameron's photographs, but with less intention. 'Artists could become peers' in the 1870s. we are informed. Well, no, they couldn't. Lord Leighton was the first artistpeer, created in 1896, very carefully as he was dying. The 'Sanitary Acts of the 1830s were beginning to address the problem of contaminated water supplies' that caused cholera. Once again, no. Cholera did not arrive in England until 1831, and it wasn't until the 1850s that the first moves were made to rid the Thames of sewage; even then Snow's theories of the water-borne transmission of cholera were still being rejected. 'Court artist Jean-Louis David' is, presumably. the Revolutionary neoclassicist Jacques-Louis David. Trilby was a portrait of Paris, not London. Chesham Place is not near Belgravia, it is in it. And so on.

Olsen is captivated by the idea of the aristocracy (by line two of Chapter 1 she has used the word three times to describe Cameron's family). This starry-eyed enchantment means a more interesting story is passing her by. With an ancien regime chevalier grandfather and a motherin-law who was the daughter of an earl, Cameron was part of the minor gentry. Her family slid precipitously down the social scale, from elite in India, through uppermiddle-class bohemia in London to, ultimately, a lower-middle-class end for her children: one a clerk in the civil service, one a studio photographer. This copy-book piece of Victorian social fluidity barely registers among the flurries of homage to the (non-)aristocracy.

What matters, though, are the photographs. Olsen suggests at the beginning that she will overturn Roger Fry's influential view that Cameron's allegorical/ religious images are sentimental nonsense, while her portraits are remarkable. But while Olsen spends a lot of time on the possible psychological reasons for Cameron's photography — to erase distance, to ease separation — there is almost no aesthetic criticism. Readers who previously admired the photographs of this blazing pioneer will continue to do so, but it will not be because we have learned that Cameron was a human bulldozer who rode roughshod over others, forced her friendship on the often unwilling, and spoke in an elevated, 'poetical' vein that today can only embarrass. Tennyson noted that her famous photograph of him made him look like a 'Dirty Monk.; she, in turn, is said to have written that it depicted 'a column of immortal grandeur'. I'll stick with the Monk.

Julia Margaret Cameron: Nineteenthcentury Photographer of Genius is at the National Portrait Gallery from 6 February to 26 May.