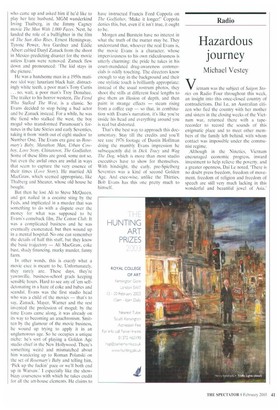 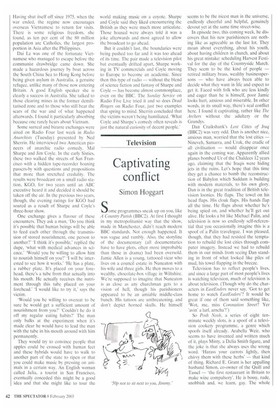 Vietnam was the subject of Saigon Stories on Radio Four throughout this week, an insight into this once-closed country of contradictions. Dai Le, an Australian citizen who fled the country with her mother and sisters in the closing weeks of the Vietnam war, returned there with a taperecorder to record the sounds of this enigmatic place and to meet other members of the family left behind, with whom contact was impossible under the communist regime.

Although in the Nineties. Vietnam encouraged economic progress, inward investment to help relieve the poverty, and a greater openness, Dai Le noted, 'There is no doubt press freedom, freedom of movement, freedom of religion and freedom of speech are still very much lacking in this wonderful and beautiful jewel of Asia.' Having shut itself off since 1975, when the war ended, the regime now encourages overseas Vietnamese to return for visits. There is some religious freedom, she found, as ten per cent of the 80 million population are Catholics, the largest proportion in Asia after the Philippines.

Dai Le was one of the fortunate Vietnamese who managed to escape before the communist drawbridge came down. She made a hazardous journey by boat across the South China Sea to Hong Kong before being given asylum in Australia, a genuine refugee, unlike many of those now entering Britain. A good English speaker she is clearly a success in Australia. She talked to those clearing mines in the former demilitarised zone and to those who still bear the scars of the war and of what happened afterwards. I found it particularly absorbing because one rarely hears about Vietnam.

Some surreal and bizarre exchanges were aired on Radio Four last week in Radio Anarchists (Tuesday) presented by Ned Sherrin. He interviewed two American pioneers of anarchic radio comedy, Mal Sharpe and Jim Coyle. In the early Sixties, these two walked the streets of San Francisco with a hidden tape-recorder hoaxing passers-by with questions and propositions that more than stretched credulity. The results were broadcast on a small radio station, KGO, for two years until an ABC executive heard it and decided it should be taken off the air. In the previous two years, though, the evening ratings for KGO had soared as a result of Sharpe and Coyle's three-hour show.

One exchange gives a flavour of these encounters. They ask a man, 'Do you think it's possible that human beings will be able to feed each other through the transmission of stored nourishment, one person to another?' I think it's possible,' replied the dupe, 'what with medical advances in science.' Would you be willing to allow him to nourish himself on you?' I will be interested to see how it works.' He has a plate, a rubber plate. It's placed on your forehead, there's a tube from that actually into his mouth. He actually receives the nutriment through this tube placed on your forehead.' I would like to try it,' says the victim.

'Would you be willing to overeat to he sure he would get a sufficient amount of nourishment from you?' Couldn't he do it off my regular eating habits?' The man only balks at the experiment when it's made clear he would have to lead the man with the tube in his mouth around with him permanently.

They would try to convince people that apples could be crossed with human feet and these hybrids would have to walk to another part of the state to ripen or that you could make music by pressing on animals in a certain way. An English woman called Julia, a tourist in San Francisco, eventually conceded this might be a good idea and that she might like to tour the world making music on a coyote. Sharpe and Coyle said they liked encountering the British as they were much more articulate. Those hoaxed were always told it was a joke afterwards and most agreed to allow the broadcast to go ahead.

But it couldn't last, the boundaries were being pushed too far and it was too ahead of its time. The pair made a television pilot but eventually drifted apart, Sharpe working in TV commercials and Coyle moving to Europe to become an academic. Since then this type of radio — without the blend of science fiction and fantasy of Sharpe and Coyle — has become almost commonplace, even on the BBC. The Sunday Service on Radio Five Live tried it and so does Dead Ringers on Radio Four, just two examples that spring to mind. Sherrin concluded that the victims weren't being humiliated. 'What Coyle and Sharpe's comedy often reveals is just the natural curiosity of decent people.'