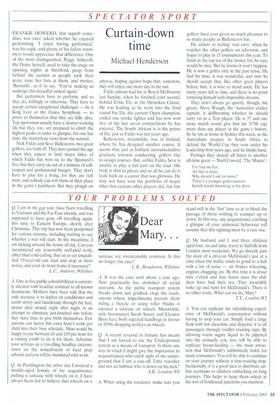 FRANKIE HOWERD, that superb comedian, was once asked whether he enjoyed performing. I enjoy having performed,' was his reply, and plenty of his fellow mummers would appreciate that difference. One of the most distinguished. Peggy Ashcroft, the Dame herself, used to take the stage on opening nights at Stratford, peep from behind the curtain as people took their seats, raise her fists at them, and mutter, 'Bastards., as if to say, 'You're making us undergo this dreadful ordeal again.'

But performers have to perform, and so they do, willingly or otherwise. They have to accept certain exceptional challenges — be it King Lear or the Eroica Symphony — to prove to themselves that they are fully alive. Top sportsmen usually have a shorter working life but they, too, are prepared to climb the highest peaks in order to glimpse, for one last time, the marvellous views from the summit.

Nick Faldo and Seve Ballesteros, two great golfers, are both 45. They have passed the age when they expect to land major titles, of which Faldo has won six to the Spaniard's five, but they carry on out of a mixture of selfrespect and professional hunger. They don't have to play for a living, for they are rich men, and nobody can rob them of their place in the game's pantheon. But they plough on anyway, hoping against hope that, somehow, they will enjoy one more day in the sun.

Faldo almost had his at Royal Melbourne last Sunday, when he finished joint second, behind Ernie Els, in the Heineken Classic. He was leading as he went into the final round but Els, the current Open champion, ended one stroke lighter and has now won five of the last seven competitions he has entered. The South African is in the prime of life, just as Faldo was ten years ago.

Ballesteros, meanwhile, was in Ireland, where he has designed another course. It seems that, just as brilliant instrumentalists graduate towards conducting, golfers like to design courses. But, unlike Faldo, Seve is unable to play a full part on the tour. His body is shot to pieces and so all he can do is look back on a career that was glorious. He may not have won the portfolio of major titles that certain other players did, but few golfers have ever given so much pleasure to so many people as Ballesteros has.

He admits to feeling 'real envy' when he watches the other golfers on television, and hopes to play in 15 tournaments this year. To finish in the top ten of the money list, he says, would be nice. But he knows it won't happen. He is now a golfer only in the past tense. He had his time, it was wonderful, and now he should accept that, like other great players before him, it is wise to stand aside. He has many years left to him. and there is no point torturing himself with impossible dreams.

They don't always go quietly, though, the greats. Steve Waugh, the Australian cricket captain, is deliberating whether he should carry on as a Test player. He is 37 and one more match would give him his 157th cap, more than any player in the game's history. So he sits at home in Sydney this week, as the Australians prepare in South Africa to defend the World Cup they won under his leadership four years ago, and he thinks hard.

Perhaps they should all listen to another all-time great — Noel Coward, 'The Master':

All that is done.

Why should I ask for more? There's a younger gener-aaation Knock-knock-knocking at the door.