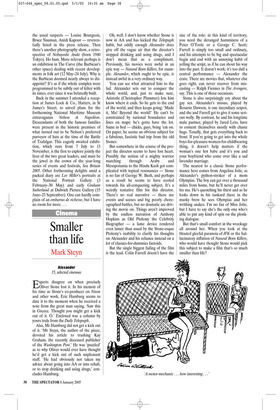 Alexander 15, selected cinemas Experts disagree on when precisely Oliver Stone lost it. In his memoir of his time as Stone’s co-producer on Nixon and other work, Eric Hamburg seems to date it to the moment when he received a note from the great man saying, ‘Saw this in Greece. Thought you might get a kick out of it. O.’ Enclosed was a column by yours truly from the Daily Telegraph.

Alas, Mr Hamburg did not get a kick out of it. ‘Mr Steyn, the author of the piece, devoted his article to trashing Kay Graham, the recently deceased publisher of the Washington Post.’ He was ‘puzzled’ as to why Oliver would ever have thought he’d get a kick out of such unpleasant stuff. ‘He had obviously not taken my advice about going into AA or into rehab, or to stop drinking and using drugs,’ concludes Hamburg. Oh, well. I don’t know whether Stone is now in AA and has kicked the Telegraph habit, but oddly enough Alexander does give off the vague air that the director’s stopped drinking and using drugs, and I don’t mean that as a compliment. Previously, his movies were awful in an epic way — Natural Born Killers, for example. Alexander, which ought to be epic, is instead awful in a very ordinary way.

You can see what attracted him to the lad. Alexander sets out to conquer the whole world, and, just to make sure, Aristotle (Christopher Plummer) lets him know where it ends. So he gets to the end of the world, and then keeps going: ‘Made it, Ma! Beyond the world!’ He can’t be constrained by national boundaries and lines on maps: he’s gotta have the lot. Same in bed — chicks, guys, bring ’em on. On paper, he seems an obvious subject for a fabulous, fascistic bad trip from the old Stoner.

But somewhere in the course of the project the director seems to have lost heart. Possibly the notion of a mighty warrior marching through Araby and Mesopotamia to the Hindu Kush got complicated with topical resonances — Stone is no fan of George W. Bush, and perhaps as a result he seems to have cooled towards his all-conquering subject. It’s a weirdly tentative film for this director. There’s no real narrative — there are events and scenes and big poorly choreographed battles, but no dramatic arc driving the movie on. Things aren’t improved by the endless narration of Anthony Hopkins as Old Ptolemy the Celebrity Biographer — a lame device rendered even lamer than usual by the Stone-esque Ptolemy’s inability to clarify his thoughts on Alexander and his reliance instead on a lot of classics-for-dummies factoids.

But the single biggest failing of the film is the lead. Colin Farrell doesn’t have the size of the role: in this kind of territory, you need the deranged hamminess of a Peter O’Toole or a George C. Scott; Farrell is simply too small and ordinary, and his attempts to be big and spectacular begin and end with an annoying habit of yelling the script, as if he can shout his way into the part. It doesn’t work; it’s too dull a central performance — Alexander the crate. There are movies that, whatever else goes right, can never recover from miscasting — Ralph Fiennes in The Avengers, say. This is one of those occasions.

Stone is also surprisingly coy about the gay sex. Alexander’s missus, played by Rosario Dawson, is one incendiary sexpot, and she and Farrell get to give it some serious welly. By contrast, he and his longtime male partner, played by Jared Leto, have to content themselves mostly with chaste hugs. Tonally, that gets everything back to front. If you’re going to get into the whole boys-for-pleasure-women-for-childbearing thing, it doesn’t help matters if the woman’s one hot babe and it’s you and your boyfriend who come over like a sad lavender marriage.

The nearest to a classic Stone performance here comes from Angelina Jolie, as Alexander’s python-stroker of a mom Olympias. The boy can get over a thousand miles from home, but he’ll never get over his ma. He’s quenching his thirst and as he looks down in his tankard there in the murky brew he sees Olympias and her writhing snakes. I’m no fan of Miss Jolie, but I have to say she’s the only one who’s able to put any kind of spin on the plonking dialogue.

But that’s small comfort in the wreckage all around her. When you look at the bloated gleeful paranoia of JFK or the hallucinatory inflation of Natural Born Killers, who would have thought Stone would pick this subject to make a film that’s so much smaller than life?