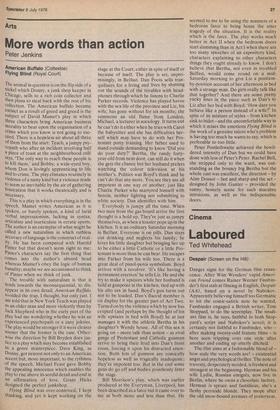 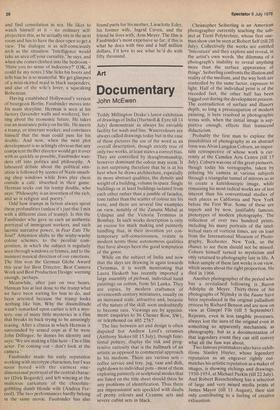 Despair (Screen on the Hill)

Danger signs for the German film renascence. After Wim Wenders' vapid American Friend comes Rainer Werner Fassbinder's first stab at filming in English, Despair (AA), based on a novel by Nabokov. Apparently believing himself too Germanic to hit the comic-satiric note he wanted, Fassbinder engaged a British writer, Tom Stoppard, to do the screenplay. The resultant film is, he says, faithful to both Stoppard's script and Nabokov's novel; it is certainly not faithful to Fassbinder, who — after making twenty-odd feature films — is here seen tripping over one style after another and ending up utterly ditched.

The film aims at a fashionable blend of— how stale the very words are! — existential angst and psychological thriller. The note of travesty, desperately needed, is freshest and strongest at the beginning. Herman and his wife Lydia, Russian emigres, now live in Berlin, where he owns a chocolate factory. Herman is spruce and fastidious, she's a fleshy peroxide blonde. They mope after the old snow-bound avenues of yesteryear, and find consolation in sex. He likes to watch himself at it — no ordinary selfprojection this, as he actually sits in the next room and has to have the door open to get a view. The dialogue is as self-consciously arch as the situation. 'Intelligence would take an area off your carnality,' he says, and when she comes clothed into the bedroom — 'Have you no sense of indecency?' (OK, it could be my notes.) She licks his boots and tells him he is so masterful. We get glimpses of a mini-skirted maid in black suspenders, and also of the wife's lover, a squeaking Bohemian.

Having established Hollywood's version of bourgeois Berlin, Fassbinder moves into his main storyline. Herman is seen at his factory (lavender walls and workers), fretting about the economic future. He takes out an insurance policy on his life. He meets a tramp, or itinerant worker, and convinces himself that the man could pass for his double. And now, when the next plot development is so achingly obvious that any competent thriller director would get it over with as quickly as possible, Fassbinder wanders off into politics and philosophy. A laboured debate about the political situation is followed by scenes of Nazis smashing shop windows while Jews play chess outside a café, absorbed in their game. Herman seeks out his tramp double, who says: 'Philosophy is an invention of the rich, and so is religion and poetry.'

Odd how tramps in fiction always spout these profundities (unless it's just that I mix with a different class of tramp). Is this the Fassbinder who gave us such an authentic portrayal of immigrant workers, and such laconic narrative power, in Fear Eats The Soul? Attention shifts to the wishy-washy colour schemes, to the peculiar composition, in which the subject is regularly seen through windows or frames, and to the insistent musical direction of our emotions. The film won the German Globe Award this year for Best Director, Best Camera Work and Best Production Design: warning enough, perhaps.

Meanwhile, after just on two hours, Herman has at last done to the tramp what we have been waiting for him to do, and been arrested because the tramp looks nothing like him. Why the dissimilitude wasn't remarked upon earlier is left a mystery, one of many little mysteries in a film that breaks its back trying to be amusingly teasing. After a climax in which Herman is surrounded by armed cops as if he were John Dillinger, he denies his identity and says: 'We are making a film here — I'm a film actor. I'm coming out — don't look at the camera.'

Fassbinder made his early reputation working with sterotype characters, but I was soon bored with the earnest onedimensional portrayal of the central character (Dirk Bogarde), and left wincing at the malicious caricature of the chocolategobbling dumb blonde wife (Andrea Ferreol). The two performances hardly belong in the same movie. Fassbinder has also found parts for his mother, Lieselotte Eder, his former wife, Ingrid Caven, and the friend he lives with, Arm Meyer. The film is Fassbinder's most expensive so far; if this is what he does with two and a half million dollars, I'd love to see what he'd do with fifty thousand.