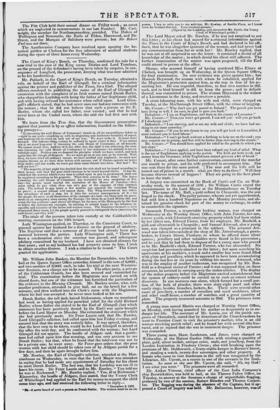 The Court of King's Bench, on Thursday, confirmed the rule

for a view trial in the case of the King versus Donlan and Lord Teynham, one* ground of the defendant's having been taken by surprise, in consequence of Langford, the prosecutor, denying what was now admitted to the kis handwriting.

Mr. Pollock, in the Court of King's Bench, on Tuesday, obtained a rile, on behalf of the Earl of Glengall, for a criminal information • against the printer and publisher of the Times, fora libel. The alleged offence consisted in publishing the name of the Earl of Glengall in connexion with the complaint of an Irish woman named Dorah Butler, who charged his Lordship with being the father of her ilegitimate child, and with having refused her assistance when called upon. Lord Glengall's affidavit stated, that he had never seen nor had any connexion with the woman ; that he did not believe that such a person as Sir E. Butler, whom she called her father, ever 'existed ; and that he had :never been at the Cashel races, where she said she had first met with shim.

We learn from the True Sun, that the Government prosecution against that journal is by ex officio information, founded on the follow ing passages

" It (meaning the said House of Commons) stands in all its unseemliness before us —right in our path—shocking us with its disgusting and loathsome brutality of aspect, and resolved not to crawl an inch out of our way. We must make it. It must move forward. The hideous thing cannot be suffered to squat where it does. If we cannot stir it, we must leap over it (meaning the said House of Commons), at all hazards. We cannot staud here, looking at it day after day, the sight is too sickening, the creature (meaning the said House of Commons) is too venomous—its attitude is too revoltingly ugly. Neither can we descend the precipice which we have scaled, and sink again Into the slough of despond. No, we must go on at any rate, or be starved. Well, then, we have tried all ordinary means, we have soothed and implored ; we must now employ threats, as we have done before with success, and if threats operate no better than smiles and fair words, we must put these same threats into force. But how ? We will see how 1" " The majority of last night has decided that the rich shall not be taxed according to their means, and that the poor shall continue to be taxed beyond theirs. It has decided that the amount which every man is called upon to pay to government shall not be regulated according to his property. What then remains to be dons? The house (meaning the said House of Commons) has rescinded its own resolution of Friday—the people must rescind the resolution of the House of Tuesday—they must refuse to pay what they can only pay at the expense of their common ruin. The refusal to pay taxes a few months ago resented the wretched Whigs in power ; a second refusal will unseat them. The Whig Government has taken the advantage or such a step, let it take the adverse consequences of it — let the people, for once, avail themselves of the example of a lord—let them look for precedents in an emergency even among the Peerage—let them do as Lord Milton did, and resist the tax.catherer—and above all things, let the men of the Metropolis be the first to follow the Aristocratic example, by refusing to submit longer to the infamous inequality and injustice of the house and window taxesThe Miuisters themselves have denounced these taxes, let the people quietly proceed to extinguish them (meaning the said taxes) and they will."

The trials of the persons taken into custody at the Coldbathfields meeting, commence on the 13th instant.

Lady Winnington applied, on Thursday, to the Consistory Court, to proceed against her husband for a divorce on the ground of adultery. The Registrar said that a sentence of divorce had already been pronounced between the parties. Lady Winnington said, "There has been a condonation since the sentence was passed, and subsequent adultery committed by my husband. I have not obtained alimony for four years ; and as my husband has had property come to him, I wish to obtain another divorce. I wish a citation to be issued." The Court granted the application.