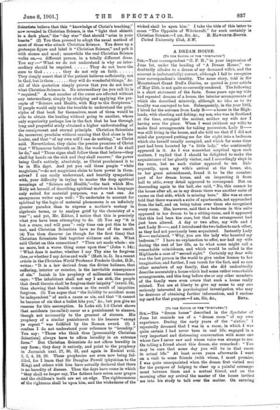 [TO THE EDITOR OF TUE "SPECTATOR."]

Sur,—Your correspondent "G. P. H.," in your impression of June 1st, under the heading of "A Dream House," un- doubtedly alludes to a dream of my deceased wife's, and the account is (substantially) correct, although I fail to recognise your correspondent's identity. The same story, told in Sir Mountstuart Grant Duff's Diaries, as quoted in your article of May 25th. is not quite so correctly rendered. The following is a short statement of the facts. Some years ago my wife had repeated dreams of a house, the interior arrangements of which she described minutely, although no idea as to its locality was conveyed to her. Subsequently, in the year 1883, I hired for the autumn from Lady B— a house in the High- lands, with shooting and fishing; my son, who was in Scotland at the time, arranged the matter, neither my wife nor I having seen the place. When I went (without my wife) to make final arrangements for taking possession, Lady B— was still living in the house, and she told me that if I did not mind she purposed putting me for the night into a bedroom which she herself usually occupied, and which for some time past had been haunted by "a little lady," who continually appeared in it. As I was somewhat sceptical upon such matters, I replied that I should be delighted to make the acquaintance of her ghostly visitor, and I accordingly slept in the room, but no such visitor appeared to me. Sub- sequently, upon my wife's arrival at the house, she, to her great astonishment, found it to be the counter- part of her dream house, and on inspecting it from hall to attic, every detail appeared to correspond. But on descending again to the hall, she said, "No, this cannot be the house after all, as in my dream there was another suite of rooms on that side, which is missing here." She was at once told that there was such a suite of apartments, not approached from the hall, and on being taken over them she recognised every room. She, however, said that a bedroom in this suite appeared in her dream to be a sitting-room, and it appeared that this had been the case, but that the arrangement had just been altered. A day or two after, my wife and I met Lady B—, and I introduced the two ladies to each other, as they had not previously been acquainted. Instantly Lady B— exclaimed, "Why, you are the lady who haunted my bedroom !" I have no explanation to offer, nor had my wife during the rest of her life, as to what some might call a remarkable coincidence, and which would be called in the Highlands a case of "second sight." Certainly my dear wife was the last person in the world to give undue license to her imagination, and further, I can vouch for the fact, and so can other members of my family, that she did undoubtedly describe accurately a house which had some rather remarkable arrangements, and this long before she or any other members of the family were even aware that such a house really existed. You are at liberty to give my name to any one seriously interested in psychological investigation who may be desirous of obtaining further information, and I enclose