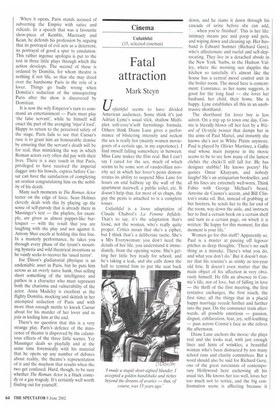 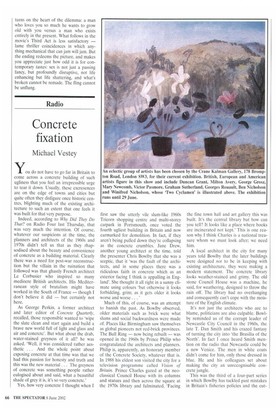 Unfaithful seems to have divided American audiences. Some think it's just Adrian Lyme's usual slick, shallow Multiplex soft-core'n'soft furnishings formula. Others think Diane Lane gives a performance of blistering intensity and reckon the sex is really hot (mainly women moviegoers of a certain age, in my experience). I find myself falling somewhere in between. Miss Lane makes the film real. But I can't say I cared for the sex, much of which seems to be some sort of vaudevillian novelty act in which her lover's penis demonstrates its ability to suspend Miss Lane for hours on end halfway up the wall of the apartment stairwell, a public toilet, etc. It doesn't help that, for most of us chaps, the guy the penis is attached to is a complete tosser.

Unfaithful is a loose adaptation of Claude Chabrol's La Femme Infidele. That's to say, it's the adaptation that's loose, not the woman, who's really quite proper. Critics moan that she's a cipher, but I think that's a deliberate tactic. She's a Mrs Everywoman: you don't need the details of her life, you understand it immediately, from the opening scene. She's getting her little boy ready for school, and he's taking a leak, and she calls down the hall to remind him to put the seat back down, and he slams it down through his cascade of urine before she can add, `. . when you're finished'. This is her life: intimacy means pee and poop and pets, and wiping down and cleaning up. Her husband is Edward Sumner (Richard Gere), who's affectionate and rueful and self-deprecating. They live in a detached abode in the New York 'burbs, in the Hudson Valley, where the morning sun dapples the kitchen so tastefully it's almost like the house has a central mood control unit in the boiler room. The mood here is contentment: Constance, as her name suggests, is good for the long haul — she loves her husband, her child, their home. She is happy. Lyne establishes all this in an unobtrusive shorthand.

The shorthand for lover boy is less adroit. On a trip up to town one day, Connie is literally blown off her feet by a Wizard of Oz-style twister that dumps her in the arms of Paul Martel, and instantly she knows she's not in White Plains anymore. Paul is played by Olivier Martinez, a Gailic stud whose main purpose in the movie seems to be to see how many of the lamest clichés the chicks'll still fall for. He has designer stubble! He knows poetry! He quotes Omar Khayyam, and nobody laughs! He's an antiquarian bookseller, and all his lines are extremely well-worn. Think Fabio with George Michael's beard, Antoine de Caunes's accent, and Bill Clinton's snake oil. But, instead of grabbing at her hooters, he sends her to the far end of the room, way down the aisle, and instructs her to find a certain book on a certain shelf and turn to a certain page, on which it is written: 'Be happy for this moment, for this moment is your life.'

Women go for this stuff? Apparently so. Paul is a master at passing off legover pitches as deep thoughts: 'There's no such thing as a mistake. There's what you do, and what you don't do.' But it doesn't matter that his routine's as stinky as ten-year old brie. It doesn't even matter that the main object of his affection is very obviously himself. He fills an absence in Connie's life, not of love, but of falling in love — the thrill of the first meeting, the first tentative exchanges, the first touch, the first time; all the things that in a placid happy marriage recede further and further into the past. On the commuter train afterwards, all possible emotions — passion, disgust, exhilaration, fear, joy, self-loathing — pass across Connie's face as she relives the afternoon.

Diane Lane anchors the movie: she plays real and she looks real, with just enough lines and hints of wrinkles; a beautiful woman who's been distracted by too many school runs and charity committees. But a word should also be said for Richard Gere, one of the great narcissists of contemporary Hollywood here eschewing all his usual tics. He knows her too well, loves her too much not to notice, and the big confrontation scene is affecting because it turns on the heart of the dilemma: a man who loves you so much he wants to grow old with you versus a man who exists entirely in the present. What follows in the movie's Third Act is less satisfactory — lame thriller coincidences in which anything mechanical that can jam will jam. But the ending redeems the picture, and makes you appreciate just how odd it is for contemporary tastes: sex is not just a passing fancy, but profoundly disruptive, not life enhancing but life shattering, and what's broken cannot be remade. The fling cannot be unflung.