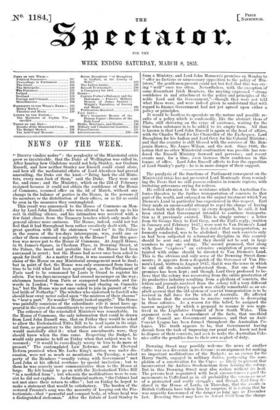 " DIGNUS vindice nodus " : the perplexity of the Ministerial crisis grew so inextricable, that the Duke of Wellington was called in. After hearing how Gladstone would not help Stanley, nor Graham Russell, and how neither Stanley nor Russell could stand alone, and how all the mediatorial efforts of Lord Aberdeen had proved unavailing, the Duke cut the knot—" Bring back the old Minis- ters, every man Jack of them," said the Duke. They were sent for, and came ; and the Ministry, which on the 22d of February resigned because it could not obtain the confidence of the House of Commons, resumed office on the 3d of March, without any change in the balance of parties in the House, in the persons of its members or the distribution of their offices, or as far as could be seen in the measures they contemplated.

This result was announced to the House of Commons on Mon- day by Lord John Russell ; who was allowed to march up to his seat in chilling silence, and his intimation was received with a few faint cheers from the Treasury benches which only made the general silence more ominous. The House, indeed, could not but feel that it had throughout been rather cavalierly dealt with. The great question with all the statesmen "sent for" to the Palace in the course of the ten-days interregnum, was, could one or other of them command a majority in the House ? But this ques- tion was never put to the House of Commons. At Argyll House, in St. James's Square, in Chesham Place, in Downing Street, at the Palace, the mood and probable bias of the House had been canvassed in secret ; but the House had never once been asked to speak for itself. As a matter of form, it was assumed that the de- cision of the House on any Ministerial arrangement must be final ; but in point of fact, the House was only summoned from time to time to be told what had been agreed upon, as the Parliament of Paris used to be summoned by Louis le Grand to register his edicts. For ten days messenger had crossed messenger on the way ; statesmen hurried from Paris or scampered backwards and for- wards in London ; "there was racing and chasing on Cannobie lea," but the House was not once asked to join in pursuit of "the lost bride of Netherby." The witches who undertook to foretell who should bear sway never called upon "the mistress of their charms " to "bear a part." No wonder" Hecate looked angrily." The House was painfully conscious of the subordinate ride it must have ap- peared in the eyes of its constituents to occupy in these transactions. The reticence of the reinstalled Ministers was remarkable. In the House of Commons, the only information that could be drawn from Lord John Russell was, that on Friday they would be asked to allow the Ecclesiastical Titles Bill to be read again in its origi- nal form, as preparatory to the introduction of amendments that would materially alter it : what those amendments were, they should know when the time came. Respecting the Budget, he would only promise to tell on Friday when that subject was to be resumed ; "it would be exceedingly wrong in him to do more at present." The contemplated Law Reforms, and the Electoral Reform promised when Mr. Locke King's motion was under dis- cussion, were not so much as mentioned. On Tuesday, a select party of the Members "usually voting with Government" met Lord John at his official residence by special invitation ; but to them he was scarcely more communicative than to the House at large. He felt bound to go on with the Ecclesiastical Titles Bill "in a modified form" ; but wherein the modifications were to con- sist he did not explain. As for financial matters, "the Cabinet had not met since their return to office " ; but on Friday he hoped to make a statement that would be satisfactory. The burden of the restored Premier's song was the necessity of keeping out the Pro- tectionists—that "powerful and compact body, at whose head was a distinguished statesman." After the failure of Lord Stanley to form a Ministry, and Lord Sohn Manners's promises on Monday to "offer no factious or unnecessary opposition to the policy of Min- isters," the gentlemen present could not but feel that this was cry- ing " wolf " once too often. Nevertheless, with the exception of some dissentient Irish Members, the meeting expressed "strong confidence in and attachment to the policy and principles of the noble Lord and the Government,"—though they were not told what these were, and were indeed given to understand that with regard to finance Government had not yet agreed upon either a policy or principles. It would be bootless to speculate on the nature and possible re- sults of a policy which is confessedly, like the abstract ideas of Plato, still shivering on the verge of existence, waiting for the time when substance is to be added to its empty form. All that is known is that Lord John Russell is again at the head of affairs, with Sir Charles Wood for his Chancellor of the Exchequer, Lord Broughton for his Indian and Lord Grey for his Colonial Minister; and that the country is still blessed with the services of Mr. Ben- jamin Hawes, Mr. James Wilson, and the rest. Since 1846, the notion that no other Ministerial combination was possible has ren- dered the Russell Ministry froward and perverse ; and recent events may, for a time, even increase their confidence in this tenure of office. Lord John Russell affects to fear the opposition of Lord Stanley's party : he is in more danger of their support.