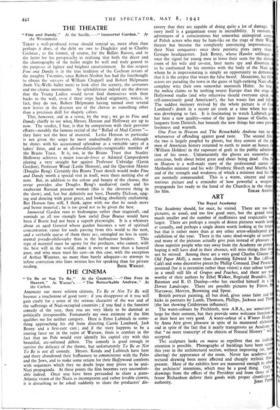 AMONGST our more solemn citizens, To Be or Not To Be will become a touchstone of good taste: if you disapprove of it you will gain credit for a sense of the serious character of the war and of the sufferings of Nazi-occupied countries ; if you find it the funniest comedy of the year, then you are very likely to be damned as politically irresponsible. Fortunately my own estimate of the film qualifies me for neither category. Here is Ernst Lubitsch in something approaching his old form directing Carole Lombard, Jack Benny and a first-rate cast ; and if the story happens to be a roaring farce set in the ruins of Warsaw, there is comfort in the fact that no Pole would ever identify his capital city with this beautiful, arc-softened debris. The comedy is good enough to survive the delicacy of the theme, but unfortunately To Be or Not To Be is not all comedy. Messrs. Korda and .Lubitsch have here and there abandoned their buffoonery to commiserate with the Poles and the Jews, and to make some return for their Hollywood comforts with sequences which they no doubt hope may prove to be antiNazi propaganda. At these points the film becomes very uncomfortable indeed. Once you have been persuaded to share a 'sansAtlantic vision of the Nazis as incompetent and rather lovable clowns, it is disturbing to be asked suddenly to share the producers' dis

covery that they are capable of doing quite a lot of damage. story itself is a gargantuan essay in incredibility. It recounts adventures of a conscientious but somewhat uninspired comp of Polish actors who may be ham-like on the stage of their War theatre but become the completely convincing impersonators their Nazi conqueron once their patriotic plots carry them Gestapo headquarters. Jack Benny, whose Hamlet soliloquy once the signal for young men to leave their seats for the dress room of his wife and co-star, later turns spy and discovers to be confronted by his enemies with the body of the Nazi ag whom he is impersonating is simply an opportunity to demons that it is the corpse that wears the false beard. Meantime, his fel actors are parading the town in the guise of high-ranking Nazi offi complete with their own somewhat moronish Hitler. So long the milieu claims to be nothing nearer Europe than the stage Hollywood studio (and why otherwise should everyone speak self-consciously good American?), the fun waxes fast and full The saddest memory revived by the whole picture is of Lombard's death in a recent air crash at a time when her tal was developing so fast. It is fascinating to watch Lubitsch gi her here a new quality—some of the ignis fatuus of Garbo, se languors from Dietrich, but beneath the new things her own pept freshness and warmth.

One Foot in Heaven and The Remarkable Andrew run no

whatsoever of offending against good taste. The second film the two is largely peopled by ghosts, but they consist of the g men of American history returned to earth to assist an honest cl (William Holden) in the exposure of graft in the public admini tion of his town.. Unfortunately the ghosts are somewhat conscious, both about being great and about being dead. One F in Heaven is a well-made story of the professional career o Methodist minister and his wife (Frederic March and Martha Sc and of the strength and weakness of which a minister and his ti are normally compounded. This is a warm, sincere and un tentious picture and a reminder of how powerful a weapon propaganda lies ready to the hand of the Churches in the shape the film. EDGAR ANSTE1