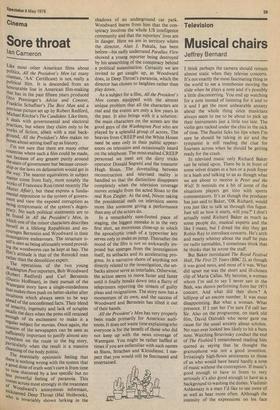 Like most other American films about Politics, All the President's Men (at many cinemas, `AA' Certificate) is not. really a Political film. It is descended from an honourable line in American film-making that has in the past fifteen years produced Otto Preminger's Advise and Consent, Franklin Schaffner's The Best Man and a Previous picture set up by Robert Redford, Michael Ritchie's The Candidate. Like them, It deals with governmental and electoral Practices, but where they claim only to be works of fiction, albeit with a real background, All the President's Men makes no bones about setting itself up as history. I'm not sure that there are many other countries where such a film could be made, not because of any greater purity around the seats of government but because censorship or the laws on defamation would get in the way. The nearest equivalents in subject Matter come from Italy, most notably the works of Francesco Rosi (most recently The Mattel Affair), but these express a fundamental opposition to the system of government and view the exposed corruption as being symptomatic of the system's degeneracy. No such political statements are to be found in All the President's Men, in Which one of the minor characters describes herself as a lifelong Republican and eneourages Bernstein and Woodward in their investigative endeavours. The structure is seen as being ultimately sound providing the woodworm can be kept at bay. The film's attitude is that of the Rentokil man rather than the demolition expert.

The operations of the two young ,

vvashing ton Post reporters, Bob Woodward (Robert Redford) and Carl Bernstein (Dustin Hoffman), in their pursuit of the Watergate story have a single-mindedness that makes them push on helter-skelter after intuitions which always seem to be way ahead of the unconfirmed facts. Their blend of tenacity, ingenuity and lack of scruples recalls the days when the press still retained enough of its excitement to make it a regular subject for movies. Once again, the Mission of the newspapers can be seen as sufficiently important to justify almost any expedient on the route to the big story, Particularly when the result is a massive Cleansing of the body politic. The essentially optimistic feeling that there is nothing wrong with the system that ,a good dose of truth won't cure is from time to time shattered by a less specific but no comes Powerful feeling of paranoia. This :fines across most strongly in the treatment Woodward's anonymous informant, nicknamed Deep Throat (Hal Holbrook), who is

invariably shown lurking in the shadows of an underground car park. Woodward learns from him that the conspiracy involves the whole US intelligence community and that the reporters' lives are in danger. Here we are in territory where the director, Alan J. Pakula, has been before—his sadly underrated Parallax View showed a young reporter being destroyed by his unearthing of the conspiracy behind a political assassination. Certainly we are invited to get caught up, as Woodward does, in Deep Throat's paranoia, which the director has chosen to heighten rather than play down.

As a subject for a film, All the President's Men comes equipped with the almost unique problem that all the characters are real and the events are only a few years in the past. It also brings with it a solution: the main characters on the screen are the good guys of the Washington Post who are played by a splendid group of actors. The heavies from CREEP and the White House need be seen only in their public appearances on television and occasionally heard on the telephone. The most exalted CREEP personnel we meet are the dirty tricks operator Donald Segretti and the treasurer Hugh Sloan. The dovetailing between reconstruction and televised reality is handled so that the distinction disappears completely when the television coverage moves straight from the acted Sloan to the real Ron Ziegler. At the end, Nixon taking the presidential oath on television seems more like someone giving a performance than any of the actors do.

In a remarkably sure-footed piece of staging, the biggest mistake is in the very first shot, an enormous close-up in which the apocalyptic crash of a typewriter key serves only to make us jump. Thereafter the mood of the firm is not so awkwardly imposed but emerges from the investigation itself, its setbacks and its accelerating progress. In a narrative shorn of anything not directly related to the investigation, the setbacks almost serve as interludes. Otherwise, the action seems to move faster and faster until it finally breaks down into a flurry of teleprinters reporting the stream of guilty pleas and resignations. The story now has a momentum of its own, and the success of Woodward and Bernstein has lifted it out of their hands.

All the President's Men has very properly been made primarily for American audiences. It does not waste time explaining who everyone is for the benefit of those who did not keep up with the news coverage of Watergate. You might be rather baffled at times if you are unfamiliar with such names as Stans, Strachan and -Kleindienst. I suspect that you would still be fascinated and entertained.