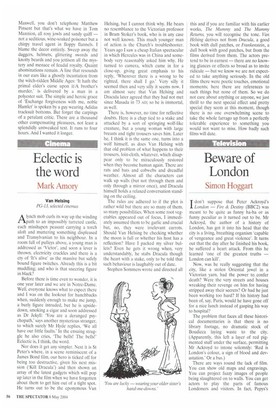 Eclectic is the word

Alynch mob curls its way up the winding path to an impossibly turreted castle, each misshapen peasant carrying a torch aloft and muttering something displeased and Transylvanian to his neighbour. In a room full of pulleys above, a young man is addressed as 'Victor', and soon a lever is thrown, electricity crackles and there is a cry of 'It's alive' as the massive but safely bound figure twitches. Already this is a bit muddling; and who is that sneering figure in black?

Before there is time even to wonder, it is one year later and we are in Notre-Dame. Well, everyone knows what to expect there and I was on the lookout for hunchbacks when, suddenly enough to make me jump, a burly figure intruded, but he is upsidedown, smoking a cigar and soon addressed as Dr Jekyll: 'You are a deranged psychopath,' says another mysterious stranger, to which surely Mr Hyde replies, 'We all have our little faults.' In the ensuing struggle he also cries, 'The bells! The bells!' Eclectic is, I think, the word.

Nor does it get any simpler. Next it is St Peter's where, in a scene reminiscent of a James Bond film, our hero is ticked off for being too destructive, given his next mission (`Kill Dracula') and then shown an array of the latest gadgets which will pop up later in the film when we have forgotten about them to get him out of a tight spot. He turns out to be the eponymous Van

Helsing, but I cannot think why. He bears no resemblance to the Victorian professor in Bram Stoker's book, who is in any case not well known. This much younger man of action is the Church's troubleshooter. Years ago I saw a cheap Italian spectacular in which Hercules was in China and somebody very reasonably asked him why. He turned to camera, which came in for a close-up, giving great emphasis to his reply, 'Wherever there is a wrong to be righted, there shall I go.' Very silly it seemed then and very silly it seems now. I am almost sure that Van Helsing and Dracula later agreed that they had not met since Masada in 73 AD; so he is immortal, as well.

There is, however, no time for reflective doubts. Here is a chap tied to a stake and attacked by a sort of springing wolf-like creature, but a young woman with large breasts and tight trousers saves him. Later he, I think it is the same one, turns into a wolf himself, as does Van Helsing with that old problem of what happens to their trousers, loin-cloth, whatever, which disappear only to be miraculously restored when they become human again. There are rats and bats and cobwebs and dreadful weather. Almost all the characters can walk up walls (but not through them and only through a mirror once), and Dracula himself holds a relaxed conversation standing on the ceiling.

The rules are adhered to if the plot is rather wild but there are so many of them, so many possibilities. When some root vegetables appeared out of focus, I immediately assumed them to be garlic and crucial but, no, they were irrelevant carrots. Should Van Helsing be checking whether the moon is full or whether his host has a reflection? Have I packed my silver bullets? Even he gets it wrong when, very understandably, he stabs Dracula though the heart with a stake, only to be told that such behaviour is laughably out of date.

Stephen Sommers wrote and directed all this and if you are familiar with his earlier works, The Mummy and The Mummy Returns, you will recognise the tone. Van Helsing derives not from Dracula, a good book with dull patches, or Frankenstein, a dull book with good patches, but from the films derived from them. The actors pretend to be in earnest — there are no knowing glances or effects so broad as to invite ridicule — but we know we are not expected to take anything seriously. In the old films there were poetic touches, emotional moments; here there are references to such things but none of them. So we do not care about anything or anyone, we just thrill to the next special effect and pretty special they seem at this moment, though there is no one overwhelming scene to take the whole farrago up from a perfectly tolerable experience to something you would not want to miss. How badly such films will date.