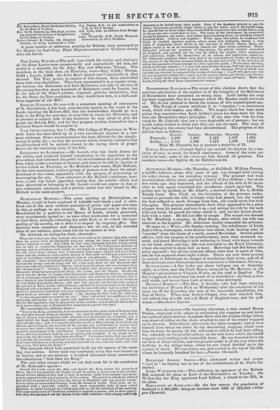 BIRMINGHAM MEETING.—The great meeting at Birmingham, on Monday, is said

to have consisted of 150,000 individuals ; and it exhibited one of the most sublime spectacles of power and peace ever seen in this, or perhaps in any country. Mr. T. A ttwood was in the chair. Resolutions for a petition to the House of Lords, already presented, were unanimously agreed to ; as were other resolutions for a memorial to Earl Grey, strongly exhorting the noble Earl, as he valued the tranquillity of the country, not to drive it to despair by resigning office. The speakers were numerous and eloquent ; but we can, in the crowded state of our columns, spare room but for an extract or two.

Mr. Attwood, on taking the chair, observed— When the Union was first formed, they were told by his friends that they would have no power—that the Oligarchy were too strong for them' and that all their efforts would be in vain. But when he had been informed that the Union would not be able to control the Oligarchy, he had said, " We will get two millions of strings, and we will place each string in the hands of a strong and brave man, and we will twist those strings into a thousand large ropes, and we will twist those ropes into one immense cable, and by means of that cable we will put a hook in the nose of Leviathan, and guide and govern him at our pleasure. Now," continued Mr. Atttvood, "have we not put a hook in the nose of Leviathan, and have we not twisted the strings and the ropes and the cable well—have we not thwarted that atrocious influence behind the Throne, which Lord Chatham said was stronger than the Throne itself 1" (Cheers.) He would explain that atrocious influence of the Oligarchy which had governed the King, the Lords, and the People. He did not say it was the House of Lords—that honourable and illustrious House, composed of an aristocracy associated with so many great and glorious recollections—bat it was a junta of one hundred and fifty individuals, and some of whom were members of' that Right Honourable House, and who had secretly and fraudulently usurped the powers of King, Lords, and Commons, and had in fact governed every thing in England with a despotic sway. These were the men who were rightly called " oligarchs," and whose dominion was now coming than end. In accomplishing this great work, no violence was required. "By obeying the law," said Mr. Attwood,

we becomepowerfed to control the law." They had united two millions of men peaceably and legally in one grand and determined association, to recover the liberty, the happiness, and the prosperity of the country, and he should like to know what power there was in England that could resist a power like this He concluded his address thus

" It is to the King, personally, that we owe more in this great work of Reform than to any other human being in existence. An ancient philosopher has said, that to see an honest man struggling with adversity and preserving his integrity, was a sight which the Gods themselves might contemplate with satisfaction. This is undoubtedly true ; but it is equally true that to see a King looking down from his throne, and feeling for the miseries of his people, and determining to relieve their miseries and redress their wrongs, is a sight which Providence might well be supposed to contemplate with satisfaction. I will now call upon you to exhibit a spectacle, and that spectacle shall be one of loyalty and devotion. I am about to ask you to cry out the words, God bless the King !' I therefore desire that you will all of you take off your hats, and that you will look up to the heavens, where the just God rules both heaven aid earth, and that you will cry out, with one heart and with one voice, 'God bless the King l'"

The spectacle which here presented itself, say the reports of the meeting, was sublime. Every head was uncovered, every face was turned up to heaven, and at one moment a hundred thousand voices answered to the exhortation "God bless the King."

The only other extract which we can find room for is the conclusion of Mr. Edmonds's speech— Should the Lords reject the Bill, and shoulti the King refuse the creation of Peers, then it remained for the People to put in action a power which all constitutional writers admitted they had a right to exercise when Government was tyrannously opposed to the great majority of the nation. The power to which he alluded bad driven an anointed King from the throne of England, and was equally competent to drive an unanointed Peerage from the House of Lords. They were all acquainted with a peaceful, orderly, and most respectable body of men called Quakers, to whose example lie wished specially to call the attention of the meeting. This respectable sect of Christians refused to support a parson ; but in their opposition they did not knock out the'.brains of the tithe-collector—they simply sufferedfa distraint to be levied upon their goods. Now, if the Quakers refused to pay the tithes, the people generally might refuse to pay the taxes ; and if the bailiff came, he should like to know where they would find the auctioneer who would dareto sell, or the people who would dare to buy. The voice of the auctioneer, he conceived, would be passive, not active; and rattler than knocking down, he would be himself knocked down. (Cheers and laughter.) While upon this point, he could not but think of another glorious patriot, whose name and character, during a long night of despotism, shone bright as the day-star of British liberty, whose example ought to be as an encouraging beacon for their future guidance. When Hampden refused the payment of ship-money, his gallant conduct electrified all England, and pointed out the way by which the people, when unanimous and combined, might rid themselves of an odious and oppressive oligarchy. Dlr. Edmonds declared before God, that if all constitutional modes of obtaining the success of the Reform measure failed, he should, and would, be the first man to refuse the payment of taxes except by a levy upon his goods. (Tremendous cheering, which lasted some minutes.) " I now call upon all who hear me, and who are prepared to join me in this step, to hold up your hands. (An immense forest of hands was immediately elevated, arcomyanied by vehement cheering.) I 00w call upon you who are not prepared to adopt this course, to hold up your hands and Signify your dissent. (Not a single hand appearing, loud shouts and cheers were rePeated.) Mark my words, failing all other more constitutional means."