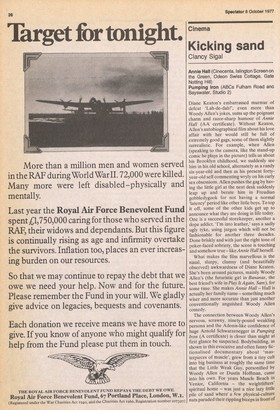 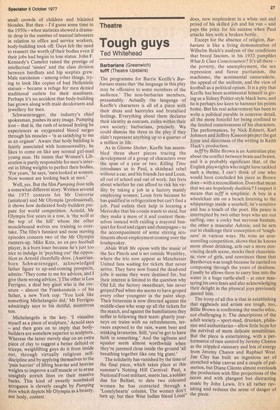 Annie Hall (Cinecenta, Islington Screen on the Green, Odeon Swiss Cottage, Gate Notting Hill) Pumping iron (ABCs Fulham Road and Bayswater, Studio 2) Diane Keaton's embarrassed murmur of defeat `Lah-de-dahl', even more than Woody Allen's jokes, sums up the poignant charm and razor-sharp humour of Annie Hall (AA certificate). Without Keaton, Allen's autobiographical film about his love affair with her would still be full of extremely good gags, some of them slightly surrealistic. For example, when Allen (speaking to the camera, like the stand-up comic he plays in the picture) tells us about his Brooklyn childhood, we suddenly see him in his old school, alternately as a randy six-year-old and then as his present fortyyear-old self commenting wryly on his early sex obsessions. Allen pushes the gag by having the little girl at the next desk suddenly leap up and berate him in Freudian gobbledygook for not having a normal 'latency' period like other little boys. To top it off, some of the other kids get up to announce what they are doing in life today. One is a successful storekeeper, another a dope addict. 'I'm into leather,' says a sadly ugly tyke, using jargon which will not be fashionable for another three decades. Done briskly and with just the right tone of poker-faced sobriety, the scene is touching and somehow true — like Annie Hall herself.

What makes the film marvellous is the nasal, slurpy, clumsy (and beautifully observed) awkwardness of Diane Keaton. She's been around pictures, mainly Woody Allen's (the futuristic girl in Bananas, the best friend's wife in Play h Again, Sam), for some time. She makes Annie Hall — Hall is actually her family name — something much wiser and more accurate than just another conventionally anguished Woody Allen comedy.

The connection between Woody Allen's nervous, scrawny, ninety-pound weakling persona and the Adonis-like confidence of huge Arnold Schwarzenegger in Pumping Iron (A certificate) is closer than might at first glance be suspected. Bodybuilding, as shown in this evocative and often funny fic tionalised documentary about 'masterpieces of muscle', grew from a tiny cult into big business at roughly the same time that the Little Weak Guy, personified by Woody Allen or Dustin Hoffman, came into his own. For years Muscle Beach in Venice, California — the weightlifters' spiritual home — was just a nice lazy little pile of sand where' a few physical-culture nuts paraded their rippling biceps in front of small crowds of children and bikinied blondes. But then — I'd guess some time in the 1950s when statistics showed a dramatic drop in the number of manual labourers in relation to office and service workers, body-building took off. buys felt the need to reassert the worth of their bodies even if their jobs had begun to lose status. John F. Kennedy's Camelot raised the prestige of intellectual 'sissies' and the class division between hardhats and hip sceptics grew. Male narcissism — among other things, trying to look like copies of had Hellenistic statues — became a refuge for men denied traditional outlets for their manliness. Perhaps it's no accident that body-building has grown along with male deodorants and jewellery for men. Schwarzenegger, the industry's chief spokesman, pushes its sexy image. Pumping iron — that is, the rush of sensual feeling he experiences as oxygenated blood surges through his muscles — 'is as satisfying to me as an orgasm'. Aware that body building is faintly associated with homosexuality, he likes to come on like any normal girl-mad young man. He insists that Women's Liberation is partly responsible for men's interest in lifting weights to perfect their bodies. 'For years,' he says, 'men looked at women. Now women are looking back at men.'

Well, yes. But the film Pumping iron tells a somewhat different story. Written around the 1975 contests for Mr Universe (amateur) and Mr Olympia (professional), it shows how dedicated body-builders prepare for world competition. Arnold, Mr Olympia five years in a row, is 'the wolf at the top of the hill' whom the other musclebound wolves are training to overtake. The film's funniest and most moving episodes concern two of the Mr Olympia runners-up. Mike Katz, an ex-pro football player, is a born loser because he's just too nice to indulge in 'psyching out' the opposition as Arnold cheerfully does. (Austrianborn Schwarzenegger, acknowledged father figure to up-and-coming prospects, admits: 'They come to me for advices, and I give them wrong advices.') The other is Lou Ferrigno, a deaf boy giant who is the creature — almost the Frankenstein — of his father, a new York cop. 'You look like something Michelangelo did,' Mr Ferrigno admiringly says to his dutiful, monstrous son, Michelangelo is the key. 'I visualise myself as a piece of sculpture,' Arnold says — and then goes on to imply that bodybuilders are somehow superior to sculptors. Whereas the latter merely slap on an extra piece of clay to suggest a better deltoid or triceps, weighlifting guys do it from inside out, through virtually religious selfdiscipline and by applying themselves to the `pain barrier' of lifting heavier and heavier weights to improve a calf muscle or to erase unsightly stretch lines on their massive backs. This kind of sweetly numbskull arrogance is cleverly caught by Pumping Iron which depicts Mr Olympia as a beauty, not body, contest.