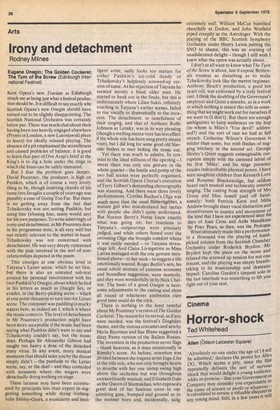 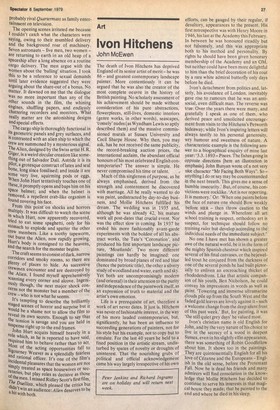 Allen (Odeon Leicester Square) 'Absolutely no one under the age of 18 will be admitted,' declares the poster for Alien (X). Which seems a pity, since the film repeatedly delivers the sort of nervou: shock that would delight a young audience. while its premise —that your Government or Company may consider you expendable in the name of science or profit or whatever.— is calculated to arouse a valuable disquiet in any young mind. Still, in a few years it will probably rival Quartermass as family entertainment on television.

The opening scenes irritated me because I couldn't catch what the characters were saying, owing to their mumbled delivery and the background roar of machinery. Seven astronauts — five men, two women — are returning to earth in an old heap of a Spaceship after a long absence on a routine cargo delivery. The men argue with the women about the 'balling' situation. I took this to be a reference to sexual demands until later evidence suggested they were arguing about the share-out of a bonus. No matter. It dawned on me that the dialogue was no more important than any of the Other sounds in the film, the whining engines, shuffling papers, and endlessly chattering recorders and monitors. What really matter are the astonishing designs and special effects.

The cargo ship is thoroughly functional in irs geometric panels and grey surfaces, and IS contrasted with an alien ship to which the crew are summoned by a mysterious signal. The Alien, designed by the Swiss artist H. R. Giger, is a weird circular creation like something out of Salvador Deli. Astride it is its Pilot, a grotesque construct of latex and seal bone, long since fossilised; and inside it are some very live, squirming pods or eggs. When John Hurt tentatively touches one of these, it promptly opens and baps him on his Space helmet; and when the helmet is removed, a repellent crab-like organism is found covering his face, From this point on shocks and horrors multiply, It was difficult to watch the scene in which Hurt, now apparently recovered, tried to eat some spaghetti, only for his stomach to explode and spatter the other crew members. Like a toothy tapeworm, out burst the Alien, now rapidly growing. Hurt's body is consigned to the heavens, and the search for the monster begins. The craft seems to consist of dark, narrow corridors and smoky rooms, so there are Plenty of places to hide. As successive crewmen encounter and are destroyed by the Alien, I found myself apprehensively scanning every corner and alcove. Ingeniously though, the next major shock concerns not the monster but a member of the crew — who is not what he seems. It's tempting to describe the brilliantly staged scenes of horror and surprise but it Would be a shame not to allow the film to reveal its own secrets, Enough to say that the tension is savage and you are held in suspense right up to the end frames. John Hurt acquits himself bravely in a role which, as he is reported to have said, required him to behave rather than to act, sM. ost of the acting opportunities fall to igourney Weaver as a splendidly fearless and rational officer. It's one of the film's incidental pleasures that the women are not simply treated as space housewives or secretaries, but play roles as decisive as those of the men. I missed Ridley Scott's first film, rhe Duellists, which pleased the critics but didn't win an audience: Alien deserves to be a hit with both.