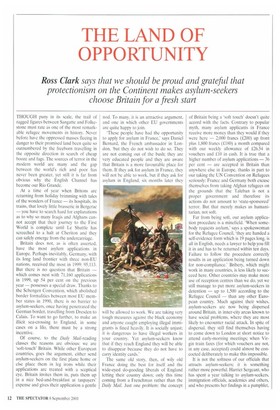 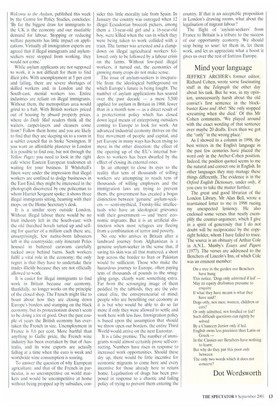 THE LAND OF OPPORTUNITY

Ross Clark says that we should be proud and grateful that

THOUGH puny in its scale, the trail of ragged figures between Sangatte and Folkestone must rate as one of the most remarkable refugee movements in history. Never before have the oppressed masses fleeing in danger to their promised land been quite so outnumbered by the freeborn travelling in the opposite direction in search of cheap booze and fags. The sources of terror in the modern world are many and the gap between the world's rich and poor has never been greater, yet still it is far from obvious why the English Channel has become our Rio Grande.

At a time of year when Britons are returning from holiday brimming with tales of the wonders of France — its hospitals, its trains, that lovely little brasserie in Bergerac — you have to search hard for explanations as to why so many Iraqis and Afghans cannot accept that their journey to the First World is complete until Le Shuttle has screeched to a halt at Cheriton and they can safely emerge from the undercarriage.

Britain does not, as is often asserted, have the most asylum applications in Europe. Perhaps inevitably. Germany, with its long land frontier with three non-EU nations, received the most in 1999: 95,113. But there is no question that Britain — which comes next with 71.160 applications in 1999, up 54 per cent on the previous year — possesses a special draw. Thanks to the Schengen Convention, which abolished border formalities between most EU member states in 1990, there is no barrier to asylum-seekers, once having penetrated the German border, travelling from Dresden to Calais. To want to go further, to make an illicit sea-crossing to England, in some cases on a lilo, there must be a strong incentive.

Of course, to the Daily Mail-reading classes the reasons are obvious: we are 'soft-touch' Britain. While other European countries, goes the argument, either send asylum-seekers on the first plane home or else place them in leg irons while their applications are treated with a sceptical eye, Britain invites them in, puts them up in a nice bed-and-breakfast at taxpayers' expense and gives their application a gentle nod. To many, it is an attractive argument, and one in which other EU governments are quite happy to join.

'These people have had the opportunity to apply for asylum in France,' says Daniel Bernard, the French ambassador in London. 'but they do not wish to do so. They are not coming out of the bush; they are very educated people and they are aware that Britain is a more favourable place for them. If they ask for asylum in France, they will not be able to work, but if they ask for asylum in England, six months later they will be allowed to work. We are taking very tough measures against the black economy and anyone caught employing illegal immigrants is fined heavily. It is socially unjust; it is dangerous to have illegal workers in your country. Yet asylum-seekers know that if they reach England they will be able to disappear because they do not have to carry identity cards.'

The same old story, then, of wily old France doing the best for itself and the wide-eyed do-gooding liberals of England letting their country down; only this time coming from a Frenchman rather than the Daily Mail. Just one problem: the concept of Britain being a 'soft touch' doesn't quite accord with the facts. Contrary to popular myth, many asylum applicants in France receive more money than they would if they were here — 2,000 francs (£200) up front plus 1,800 francs (f180) a month compared with our weekly allowance of £26.54 in vouchers and £10 in cash. It is true that a higher number of asylum applications — 36 per cent — are accepted in Britain than anywhere else in Europe, thanks in part to our taking the UN Convention on Refugees seriously: France and Germany both excuse themselves from taking Afghan refugees on the grounds that the Taleban is not a proper government and therefore its actions do not amount to 'state-sponsored' terror. But that merely makes us humanitarian, not soft.

Far from being soft, our asylum application procedure is a minefield. 'When somebody requests asylum,' says a spokeswoman for the Refugee Council, 'they are handed a self-evidence form which is 19 pages long, is all in English, needs a lawyer to help you fill it in and has to be returned within ten days. Failure to follow the procedure correctly results in an application being turned down for non-compliance.' Bribery, which might work in many countries, is less likely to succeed here. Other countries may make more use of reception centres than we do, yet we still manage to put more asylum-seekers in detention — up to 1,500 according to the Refugee Council — than any other European country. Much against their wishes, asylum-seekers are now being dispersed around Britain, in inner-city areas known to have social problems, where they are most likely to encounter racial attack. In spite of dispersal, they still find themselves having to come down to London at short notice to attend early-morning meetings; when Virgin train fares (for which vouchers are not, in any case, accepted) could almost be concocted deliberately to make this impossible.

It is not the softness of our officials that attracts asylum-seekers; it is something rather more powerful. Harriet Sergeant, who has spent a year talking to asylum-seekers, immigration officials, academics and others, and who presents her findings in a pamphlet, Welcome to the Asylum, published this week by the Centre for Policy Studies, concludes: 'By far the biggest draw for immigrants to the UK is the economy and our insatiable demand for labour. Stopping or reducing welfare payments has little impact on applications. Virtually all immigration experts are agreed that if illegal immigrants and asylumseekers were stopped from working, they would not come.'

While asylum applicants are not supposed to work, it is not difficult for them to find illicit jobs. With unemployment at 5 per cent and falling, there are severe shortages of skilled workers and, in London and the South-east, menial workers too. Entire industries are reliant on illegal immigrants. Without them, the metropolitan area would grind to a halt. With British workers priced out of housing by absurd property prices, where do Daily Mail readers think all the waiters, carpet-layers and cleaners come from? Follow them home and you are likely to find that they are sleeping six to a room in a sublet council flat in Stoke Newington. If you want an affordable plasterer in London it is possible to find one, but not through the Yellow Pages: you need to look in the right café where Eastern European tradesmen sit waiting for your business. If Whitehall's finest were under the impression that illegal workers are confined to dodgy businesses in the East End, they might be interested in the photograph discovered by one policeman to whom Harriet Sergeant spoke: it shows three illegal immigrants sitting, beaming with their mops, on the Home Secretary's desk.

It is a similar story outside London. Without illegal labour there would be no fruit industry left in the South-east: with the old thatched hovels tarted up and selling for quarter of a million each there are, unsurprisingly, few native-born labourers left in the countryside; only itinerant Poles housed in battered caravans carefully tucked away behind barns. Such workers fulfil a vital role in the economy; the only regret is that they have to undertake their trades illicitly because they are not officially allowed to work.

It is easier for illegal immigrants to find work in Britain because our economy, thankfully, no longer works on the principle of the closed shop. The French might like to boast about how they are closing down Europe's borders and stamping on the black economy, but its protectionism doesn't seem to be doing a lot of good. Over the past couple of years the British economy has overtaken the French in size. Unemployment in France is 8.6 per cent. More hurtful than anything to Gallic pride, the French wine industry has been overtaken by that of Australia, and its wine exports are actually falling at a time when the euro is weak and worldwide wine consumption is soaring.

To answer the question of why European agriculture, and that of the French in particular, is so uncompetitive on world markets and would be uncompetitive at home without being propped up by subsidies, con

sider this little morality tale from Spain. In January the country was outraged when 12 illegal Ecuadorian broccoli pickers, among them a l3-year-old girl and a 16-year-old boy, were killed when the van in which they were being taken to work collided with a train. The farmer was arrested and a clampdown on illegal agricultural workers followed: only to be followed by a labour crisis on the farms. Without low-paid illegal workers, it turned out, the economics of growing many crops do not make sense.

The issue of asylum-seekers is inseparable from the ideological battleground on which Europe's future is being fought. The number of asylum applications has soared over the past decade — a mere 5,500 applied for asylum in Britain in 1988, fewer than in a month now — as a direct result of a protectionist policy which has closed down legal means of enterprising outsiders coming to Europe to look for work, An advanced industrial economy thrives on the free movement of people and capital, and yet Europe in many ways has been trying to move in the other direction: the effect of the opening up of the FU's internal borders to workers has been dwarfed by the effect of closing its external ones.

In an attempt to close its eyes to the reality that tens of thousands of willing workers are attempting to reach tens of thousands of willing employers and the immigration laws are trying to prevent them, the government has created a bogus distinction between 'genuine asylum-seekers — semi-mythical, Trotsky-like intellectuals who have an ideological grievance with their government — and `mere' economic migrants. But it is an artificial distinction when most refugees are fleeing from a combination of terror and poverty.

No one who arrives in Britain after a landward journey from Afghanistan is a genuine asylum-seeker in the sense that, if saving his skin was all that mattered, a short hop across the border to Iran or Pakistan would be sufficient. Those who make the hazardous journey to Europe, often paying tens of thousands of pounds to the smuggling gangs, clearly want something extra. Far from the scrounging image of them peddled by the tabloids, they are the educated elite, the entrepreneurial of mind; people who are benefiting our economy as it is but who would be able to do so far more if only they were allowed to settle and work here with less fuss. Immigration policy is based upon the assumption that should we throw open our borders, the entire Third World would arrive on the next Eurostar, It is a false premise. The number of immigrants would almost certainly prove self-correcting. Numbers have risen in response to increased work opportunities. Should these dry up, there would be little incentive for economic migrants to come here and every incentive for those already here to return home. Legalisation of drugs has been proposed in response to a chaotic and failing policy of trying to prevent them entering the country. If that is an acceptable proposition in London's drawing rooms, what about the legalisation of migrant labour?

The flight of 'asylum-seekers' from France to Britain is a tribute to the success of our opportunity economy. We should stop being so sour; let them in, let them work, and let us appreciate what a boost it gives us over the rest of fortress Europe.