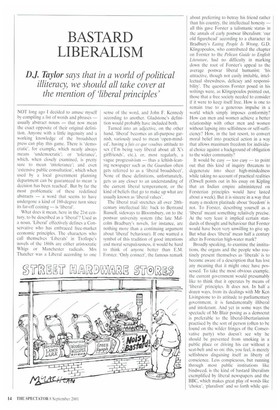 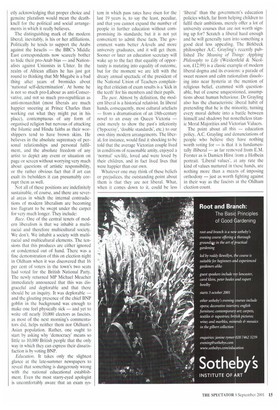 DJ. Taylor says that in a world of political

illiteracy, we should all take cover at the mention of 'liberal principles'

NOT long ago I decided to amuse myself by compiling a list of words and phrases — usually abstract nouns — that now mean the exact opposite of their original definition. Anyone with a little ingenuity and a working knowledge of the broadsheet press can play this game. There is 'democratic', for example, which nearly always means 'undemocratic'; or 'tolerance', which, when closely examined, is pretty sure to mean 'intolerance': and even 'extensive public consultation', which when used by a local government planning department can be guaranteed to mean 'a decision has been reached'. But by far the most problematic of these redefined abstracts — a word that seems to have undergone a kind of 180-degree turn since its far-off coining — is 'liberal'.

What does it mean, here in the 21st century, to be described as a 'liberal'? Used as a noun, 'Liberal' effectively defines a Conservative who has embraced free-market economic principles. The characters who call themselves 'Liberals' in Trollope's novels of the 1860s are either aristocratic Whigs or Manchester radicals. Mrs Thatcher was a Liberal according to one sense of the word, and John F. Kennedy according to another. Gladstone's definition would probably have included both.

Turned into an adjective, on the other hand. 'liberal' becomes an all-purpose garnish, variously used to mean 'open-minded', having a fais cc que voudras attitude to sex (I'm being very liberal about all X's girlfriends', etc.). or, most regularly, a vague progressivism — thus a knish-leaning newspaper such as the Guardian often gets referred to as a 'liberal broadsheet'. None of these definitions, unfortunately, gets us any closer to an understanding of the current liberal temperament, or the kind of beliefs that go to make up what are usually known as 'liberal values'.

The liberal trail stretches all over 20thcentury intellectual life: back to Bertrand Russell, sideways to Bloomsbury, on to the postwar university system (the late Malcolm Bradbury's novels, for instance, are nothing more than a continuing argument about 'liberal' behaviour). If one wanted a symbol of this tradition of good intentions and moral scrupulousness, it would be hard to think of anyone better than E.M. Forster. 'Only connect', the famous remark about preferring to betray his friend rather than his country, the intellectual honesty — all this gave Forster a talismanic status in the annals of early postwar liberalism: 'our old figurehead' according to a character in Bradbury's Eating People Is Wrong. G.D. Klingopoulos, who contributed the chapter on Forster to the Pelican Guide to English Literature, had no difficulty in marking down the root of Forster's appeal to the average postwar liberal humanist: 'his attractive, though not easily imitable, intellectual shrewdness, delicacy and responsibility'. The questions Forster posed in his writings were, as Klingopoulos pointed out, those that a free society needed to consider if it were to keep itself free. How is one to remain true to a generous impulse in a world which simply imposes conformity? How can men and women achieve a better relationship with other men and women without lapsing into selfishness or self-sufficiency? How, in the last resort, to convert moral belief into practical action in a way that allows maximum freedom for individual choice against a background of obligation to the wider community?

It would be easy — too easy — to point out that this kind of inquiry threatens to degenerate into sheer high-mindedness while taking no account of practical realities (Orwell points out in his essay on Kipling that an Indian empire administered on Forsterian principles would have lasted about a week). But it is sincere in a way that many a modern platitude about 'freedom' is not. To Forster, describing yourself as a 'liberal' meant something relatively precise. At the very least it implied certain standards of thought and behaviour that Forster would have been very unwilling to give up. But what does 'liberal' mean half a century after its Forsterian high-water mark?

Broadly speaking, to examine the institutions, the organs and the people who routinely present themselves as 'liberals' is to become aware of a description that has lost any meaning that it might once have possessed. To take the most obvious example, the current government would presumably like to think that it operates by means of 'liberal' principles. It does not. In half a dozen ways, from its dealings with Mr Ken Livingstone to its attitude to parliamentary government, it is fundamentally illiberal and intolerant. And yet in some ways the spectacle of Mr Blair posing as a democrat is preferable to the liberal-libertarianism practised by the sort of person (often to be found on the wilder fringes of the Conservative party) who doesn't see why he should be prevented from smoking in a public place or driving his car without a seat-belt and so on: this, you feel, is merely selfishness disguising itself as liberty of conscience. Less conspicuous, but running through most public institutions like bindweed, is the kind of bastard liberalism exemplified by liberal newspapers and the BBC, which makes great play of words like 'choice', 'pluralism' and so forth while qui etly acknowledging that proper choice and genuine pluralism would mean the deathknell for the political and social arrangements in which it really believes.

The distinguishing mark of the modern liberal, inevitably, is his or her affiliations. Politically he tends to support the Arabs against the Israelis — the BBC's Middle East correspondents now scarcely bother to hide their pro-Arab bias — and Nationalists against Unionists in Ulster. In the realm of African affairs he has just got round to thinking that Mr Mugabe is a bad thing after years of bromides about 'national self-determination'. At home he is not so much pro-Labour as anti-Conservative, and not so much pro-republican as anti-monarchist (most liberals are much happier sneering at Prince Charles than working out what they might put in his place), contemptuous of any form of organised religion but nervous of attacking the Islamic and Hindu faiths as their worshippers tend to have brown skins. He believes in the absolute supremacy of personal relationships and personal fulfilment, and the absolute freedom of any artist to depict any event or situation on page or screen without worrying very much about questions of artistic responsibility, or the rather obvious fact that if art can exalt its beholders it can presumably corrupt them as well.

Not all of these positions are indefinitely sustainable, of course, and there are several areas in which the internal contradictions of modern liberalism are becoming too flagrant to be swept under the carpet for very much longer. They include: Race. One of the central tenets of modern liberalism is that we inhabit a multiracial and therefore multicultural society. We don't. We inhabit a society with multiracial and multicultural elements. The tensions that this produces are either ignored or condemned out of hand. There was a fine demonstration of this on election night in Oldham when it was discovered that 16 per cent of voters in the town's two seats had voted for the British National Party. The newly returned MP Michael Meacher immediately announced that this was disgraceful and deplorable and that there should be an inquiry. It was deplorable — and the gloating presence of the chief BNP goblin in the background was enough to make one feel physically sick — and yet to write off nearly 10.000 electors as fascists, as most of the next morning's commentators did, helps neither them nor Oldham's Asian population. Rather, one ought to Start by asking why 'democracy' means so little to 10,000 British people that the only way in which they can express their dissatisfaction is by voting BNP.

Education. It takes only the slightest glance at the late-summer newspapers to reveal that something is dangerously wrong with the national educational establishment. Even the most starry-eyed apologist is uncomfortably aware that an exam sys

tem in which pass rates have risen for the last 19 years is, to say the least, peculiar, and that you cannot expand the number of people in further education without compromising its standards; but it is not yet convenient to admit these facts. The government wants better A-levels and more university graduates, and it will get them. Sooner or later an education secretary will wake up to the fact that equality of opportunity is mutating into equality of outcome, but for the moment we are left with the dreary annual spectacle of the president of the National Union of Teachers complaining that criticism of exam results is a 'kick in the teeth' for his members and their pupils.

The past. Almost by definition, the modern liberal is a historical relativist. In liberal hands, consequently, most cultural artefacts — from a dramatisation of an 18th-century novel to an essay on Queen Victoria — exist merely to show the past's inferiority ('hypocrisy', 'double standards', etc.) to our own shiny modern arrangements. The liberal, for instance, would find it shocking to be told that the average Victorian couple lived in conditions of reasonable amity, enjoyed a 'normal' sex-life, loved and were loved by their children, and in fact lived lives that were happier than our own.

Whatever one may think of these beliefs or prejudices, the outstanding point about them is that they are not liberal. What, when it comes down to it, could be less 'liberal' than the government's education policies which, far from helping children to fulfil their ambitions, merely offer a lot of university courses that are not worth signing up for? Scratch a liberal hard enough and he will generally turn into something a good deal less appealing. The Birkbeck philosopher A.C. Grayling's recently published The Meaning of Things: Applying Philosophy to Life (Weidenfeld & Nicolson, 112.99) is a classic example of modern liberal dogma and its evasions: a parade of sweet reason and calm rationalism dissolving into near hysteria at the mention of religious belief, crammed with questionable, but of course unquestioned, assumptions about human behaviour. Dr Grayling also has the characteristic liberal habit of pretending that he is the minority, turning every moral debate into a battle between himself and shadowy but nonetheless titanic Moral Majorities and Victorian Valuers.

The point about all this — education policy. A.C. Grayling and denunciations of people who believe they have nothing worth voting for — is that it is fundamentally illiberal — as far removed from E.M. Forster as is Damien Hirst from a Holbein portrait. 'Liberal values', at any rate the kind of values nurtured in these hands, are nothing more than a means of imposing orthodoxy — just as worth fighting against in their way as the fascists at the Oldham election count.