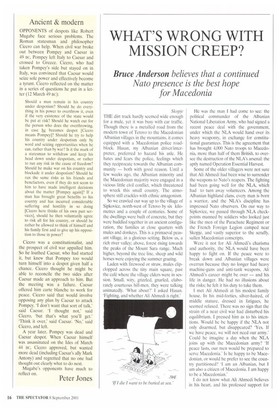 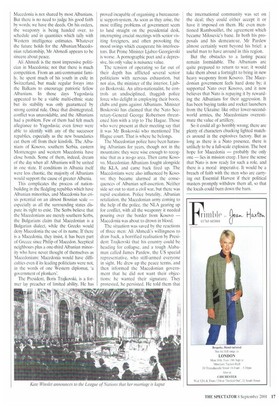 Bruce Anderson believes that a continued

Nato presence is the best hope for Macedonia

Skopje THE dirt track hardly seemed wide enough for a mule, yet it was busy with car traffic. Though there is a metalled road from the modern town of Tetovo to the Macedonian Albanian villages in the mountains, it comes equipped with a Macedonian police roadblock. Hasan, my Albanian driver/interpreter, preferred to hazard his axle. He hates and fears the police, feelings which they reciprocate towards the Albanian community — both with good reason. Until a few weeks ago, the Albanian minority and the Macedonian majority were engaged in a vicious little civil conflict, which threatened to wreck this small country. The atmosphere still crackles with ethnic antagonism.

So we crawled our way up to the village of Sipkovice, north-west of Tetovo by six kilometres and a couple of centuries. Some of the dwellings were built of concrete, but they were huddled together in an ancient configuration, the families at close quarters with mules and donkeys. This is a primaeval peasant village, in a glorious setting. Below us, a rich river valley; above, forest rising towards the peaks of the Mount Sara range. Much higher, beyond the tree line, sheep and wild horses were enjoying the summer grazing.

Laden with firewood or straw, mules clipclopped across the tiny main square, past the café where the village elders were in session. Small, wiry, grizzled, gnarled, elaborately courteous hill-men, they were talking animatedly. 'What about?' I asked Hasan. 'Fighting, and whether Ali Ahmedi is right.'

He was the man I had come to see: the political commander of the Albanian National Liberation Army, who had signed a recent peace deal with the government, under which the NIA would hand over its heavy weaponry, in exchange for constitutional guarantees. This is the agreement that has brought 4,000 Nato troops to Macedonia, more than half of them British, to oversee the destruction of the NLA's arsenal: the aptly named Operation Essential Harvest.

Some of the older villagers were not sure that All Ahmedi had been wise to surrender the weapons to Nato's reapers. The fighting had been going well for the NLA, which had to turn away volunteers. Among the Albanian highland clans, every man is born a warrior, and the NLA's discipline has impressed Nato observers. On our way to Sipkovice, we passed through NLA checkpoints manned by soldiers who looked just like the men of the Parachute Regiment or the French Foreign Legion camped near Skopje, and vastly superior to the scruffy, sullen Macedonian conscripts.

Were it not for Ali Ahmedi's charisma and authority, the NLA would have been happy to fight on. lithe peace were to break down and Albanian villages were overrun because they no longer had heavy machine-guns and anti-tank weapons, Ali Ahmedi's career might be over — and his life in danger. He had no illusions about the risks; he felt it his duty to take them.

I met Ali Ahmedi at his modest family house. In his mid-forties, silver-haired, of middle stature, dressed in fatigues, he seemed relaxed. There was no sign that the strain of a near civil war had disturbed his equilibrium. I pressed him as to his intentions. Would he be happy if the NLA not only disarmed, but disappeared? 'Yes. If we have peace, we will not need our army.' Could he imagine a day when the NLA joins up with the Macedonian army? 'If peace lasts, our men would be prepared to serve Macedonia.' Is he happy to be Macedonian, or would he prefer to see the country partitioned? 'I am an Albanian, but I am also a citizen of Macedonia. I am happy to be a Macedonian.'

I do not know what Ali Ahmedi believes in his heart, and his professed support for Macedonia is not shared by most Albanians. But there is no need to judge his good faith by words; we have the deeds. On his orders, the weaponry is being handed over, to schedule and in quantities which tally with Western intelligence estimates. Whatever the future holds for the Albanian/Macedonian relationship, Mr Ahmedi appears to be sincere about peace.

Ali Ahmedi is the most impressive politician in Macedonia; not that there is much competition. From an anti-communist family, he spent much of his youth in exile in Switzerland, but made regular forays into the Balkans to encourage patriotic fellow Albanians. In those days Yugoslavia appeared to be a viable multi-ethnic state but its stability was only guaranteed by strong central rule. Once that disintegrated, conflict was unavoidable, and the Albanians had a problem. Few of them had felt much allegiance to Yugoslavia; even fewer were able to identify with any of the successor republics, especially as the new boundaries cut them off from their kinsfolk. The Albanians of Kosovo, southern Serbia, eastern Montenegro and western Macedonia have close bonds. Some of them, indeed, dream of the day when all Albanians will be united in one state. If conditions in Albania itself were less chaotic, the majority of Albanians would support the cause of greater Albania.

This complicates the process of nationbuilding in the fledgling republics which have Albanian minorities, and Macedonia has crisis potential on an almost Bosnian scale — especially as all the surrounding states dispute its right to exist. The Serbs believe that the Macedonians are merely southern Serbs, the Bulgarians claim that Macedonian is a Bulgarian dialect, while the Greeks would deny Macedonia the use of its name. If there is a Macedonia, they insist, it has been part of Greece since Philip of Macedon. Sceptical neighbours plus a one-third Albanian minority who have never thought of themselves as Macedonians: Macedonia would have difficulties even if its leading politicians were not, in the words of one Western diplomat, 'a government of plonkers'.

The President, Boris Trajkovski, is a former lay preacher of limited ability. He has proved incapable of organising a bureaucratic support-system. As soon as they arise, the most trifling problems of government seem to land straight on the presidential desk, interrupting crucial meetings with senior visiting foreigners, and often provoking the mood swings which exasperate his interlocutors. But Prime Minister Ljubco Georgievski is worse. A pornographic poet and a depressive, his only value is nuisance value.

The tension of operating so far out of their depth has afflicted several senior politicians with nervous exhaustion, but not alas, the minister of the interior, Ljubco Boskovski. An ultra-nationalist, he controls an undisciplined, thuggish police force who delight in employing their boots, Clubs and guns against Albanians. Minister Boskovski has claimed that the Nato Secretary-General George Robertson threatened him with a trip to The Hague. Those who were present at their meeting say that it was Mr Boskovski who mentioned The Hague court. That is where he belongs_ The Macedonian police have been harassing Albanians for years, though not in the mountains: they were wise enough to recognise that as a no-go area. Then came Kosovo. Macedonian Albanians fought alongside the KLA, and came back fired up. The Macedonians were also influenced by Kosovo; they became alarmed at the consequences of Albanian self-assertion. Neither side set out to start a civil war, but there was rapid escalation. Police brutality, Albanian retaliation, the Macedonian army coming to the help of the police, the NLA gearing up for conflict, with all the weaponry it needed pouring over the border from Kosovo — Macedonia was about to drown in blood.

The situation was saved by the reactions of three men: Ali Ahmedi's willingness to draw back, a horrified realisation by President Trajkovski that his country could be heading for collapse, and a tough Alabaman called James Pardew, the US special representative, who stiff-armed everyone in sight. He drew up the peace terms, and then informed the Macedonian government that he did not want their objections; he wanted their signature_ They protested, he persisted. He told them that the international community was set on the deal; they could either accept it or have it imposed on them. He even mentioned Rambouillet, the agreement which became Milosevic's bane. In both his proposals and his demeanour. Mr Pardew almost certainly went beyond his brief: a useful man to have around in this region.

But the obstacles to a lasting peace remain formidable. The Albanians are quite prepared to return to war; it would take them about a fortnight to bring in new heavy weaponry from Kosovo. The Macedonian government feels hard done by; it supported Nato over Kosovo, and it now believes that Nato is repaying it by rewarding the Albanians for their aggression. It has been buying tanks and rocket launchers from the Ukraine: like other lower-secondworld armies, the Macedonians overestimate the value of artillery.

So it could all go horribly wrong; there are plenty of characters chucking lighted matches around in the explosives factory. But as long as there is a Nato presence, there is unlikely to be a full-scale explosion. The best hope for Macedonia — probably the only one — lies in mission creep. I have the sense that Nato is now ready for such a role, and there is a moral imperative. It would be a breach of faith with the men who are carrying out Essential Harvest if their political masters promptly withdrew them all, so that the locals could burn down the barn.