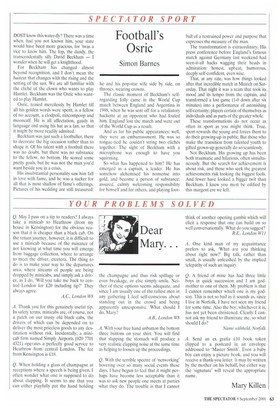 Page 63, 8 September 2001 — Q. With the terrible spectre of 'networking' hovering over so
Close

Q. With the terrible spectre of 'networking' hovering over so

many social events these days, I have begun to feel that it might perhaps have become less acceptable than it was to ask new people one meets at parties what they do. The trouble is that I cannot

think of another opening gambit which will elicit a response that one can build on so well conversationally. What do you suggest? RE., London W11

A. One kind man of my acquaintance prefers to ask, 'What are you thinking about right now?' Big talk, rather than small, is usually unleashed by the implied telepathy of such an inquiry.