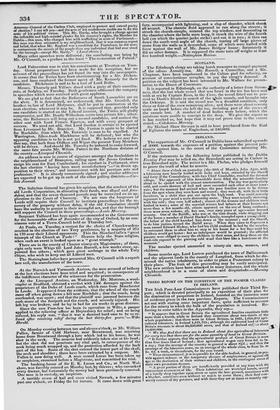 The Edinburgh clergy are taking harsh measures to compel payment of the odious Annuity-tax. Mr. Russell, a Councillor, and a Mr. Chapman, have been imprisoned in the Calton gaol for refusing, on account of conscientious scruples, to pay the clergy's demand. A petition on the subject has been intrusted to Mr. Wallace for presen tation to the House of Commons. •

It is reported in Edinburgh, on the authority of a letter from Strom-to ness' that the last whale vessel that was beset in the ice has been met with at sea by Captain Ross, in the Cove, the vessel fitted out to pro ceed to Davis's Straits in search of the ale vessels, and brought into the Orkneys. It is said the vessel was in a dreadful condition, only three or four of the crew remaining alive ; and there were about seventy souls on board before she left the ice, including part of the crews of the vessels lost. A number of dead bodies were below, which the survivors were unable to consign to the deep. We give the report as it has reached us, but hope that it may not prove true to the extent stated.—Caledonian Mercury.

Sir Michael Shaw Stewart is said to have purchased from the Earl of Eglinton the estate of Eaglesham, at 240,000/.