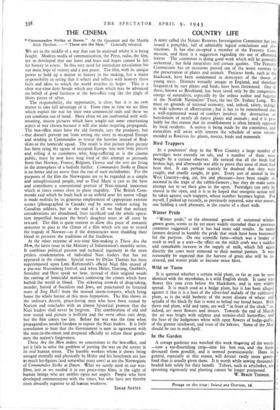 "Commandos Strike at Dawn." At the Qaumont and the. Marble Arch Pavilion. —" These are the Men." Generally released.

WE are in the middle of a war that can be analysed whilst it is being fought. Modern media of communication, the Press, radio, the film,

arc so developed that our hates and fears and hopes cannot be left for history to assess. In this very need for immediate articulation lies our main hope of victory and a just peace. The film, with its unique power to hold up a mirror to history in the making, has a major responsibility in seeing that it selects and reflects with honesty those facts and ideas to which the world attaches its hopes. This is a clear war-time duty beside which any claim which may be advanced on behalf of good business at the box-office ring like the jingle of thirty pieces of silver. The responsibility, the opportunity, is clear, but it is no easy matter to take full advantage of it. From time to time we see films which exploit the war for their own commercial ends and these we can condemn out of hand. More often we are confronted with wellmeaning, sincere pictures which have sought out some entertaining aspect of war chosen because it will also make inspiring propaganda. The box-office must have the old formula, says the producer, but . that doesn't prevent me from setting my story in occupied Europe and sending in Commandos to rescue the heroine instead of Red skins or the homicide squad.. The restilt is that picture after picture has been tying the agony of occupied Europe into neat little parcels and selling it to customers who, long-suffering as is the cinema public, must by now have long tired of this attempt to persuade

them that Norway, France, Belgium, Greece and the rest are living in the atmosphere of a bedside thriller. Commandos Strike at Dawn

is no better and no worse than the run of such melodramas. For the purposes of the film the Norwegians are to be regarded as a simple and unsophisticated people, and so Paul Muni is cast as the hero and contributes a conventional portrait of Nazi-injured innocence which at times comes close to plain stupidity. The British Commando raid which he leads back to an airfield near his native village is made realistic by its generous employment of appropriate exterior scenes (photographed in Canada) and by some violent acting by Canadian soldiers, but at the end of it all we find that military considerations are abandoned, lives sacrificed and the whole opera

tion imperilled because the hero's daughter must at all costs be rescued. The film is quite content to allow this piece-of romantic

nonsense to pass as the climax of a film which sets out to record the tragedy of Norway—as if the democracies were shedding their blood to preserve the traditions of the feuilleton.

At the other extreme of war-time film-making is These Are the Men, the latest issue in the Ministry of Information's monthly series.

It combines political passion and technical ingenuity in the most pitiless condemnation of individual Nazi leaders that has yet appeared in the cinema. Special verse by Dylan Thomas has been superimposed upon Leni Riefenstahl's official Nazi film record of a pre-war Nuremberg festival, and when Hitler, Goering, Goebbels, Streicher and Hess speak we hear, instead of their original words

the ranting of homicidal maniacs confessing the crimes which have bathed the world in blood. The sickening avowals of drug-taking, murder, hatred of Socialists and Jews, are punctuated by frenzied roars of Sieg Heil I from the massed storm-troopers, which bring home the whole horror of this mass hypnotism. The film shows us the ordinary decent, peace-loving men who have been ruined by Nazism and concludes with an almost hysterical promise that the Nazi leaders shall never be forgiven. The combination of old and new sound and picture is brilliant and the verse often cuts deep, but the film comes too late. Before the war was the time when propagandists needed freedom to expose the Nazi leaders. It is little consolation to hear that the Government is now in agreement with the man-in-the-street and prepared officially to refuse these gentlemen the nation's forgiveness.

These Are the Men makes no concessions to the box-office, and yet it fails to solve the problem of putting the war on the screen in its real human terms. The humble workers whom it shows being savaged mentally and physically by Hitler and his henchmen are just as much lay-figures (and somewhat puny ones) as arc the Norwegians of Commandos Strike at Dawn. What we surely need in our warfilms, just as we needed it in our peace-time films, is the sight of human beings who are neither ogres nor angels. People who have developed commensurate with the times, but who have not thereby risen absurdly superior to all human weakness.