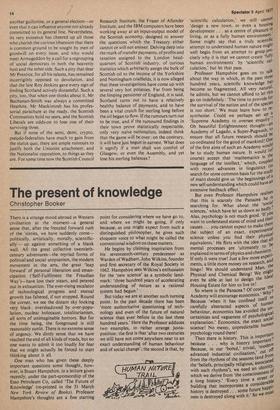 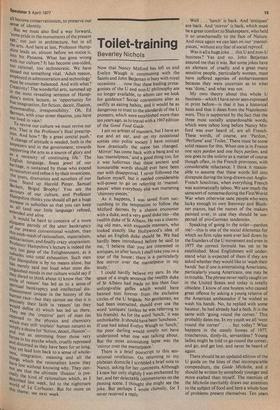 The present of knowledge

There is a strange mood abroad in Western civilisation at the moment—a general sense that, after the frenzied forward rush of the 'sixties, we have suddenly come— politically, artistically, morally, scientifically — up against something of a blank wall. All the great collective twentiethcentury adventures—the myriad forms of political and social utopianism, the modern movement in the arts, the great 'leap forward' of personal liberation and emancipation (`Self-Fulfilment the Freudian Way')—have lost their steam, and petered out in exhaustion. The ever-rising escalator of technological progress and eternal growth has faltered, if not stopped. Round the corner, we see the distant sky looking very black : overshadowed by over-population, nuclear holocaust, totalitarianism, all sorts of unimaginable horrors. But for the time being, the foreground is still reasonably sunlit. There is no extreme sense of urgency. We dimly sense that we have reached the end of all kinds of roads, but no one wants to admit it too loudly for fear that we might actually be forced to start thinking about it all.

One man who has given these deeply important questions some thought, however, is Stuart Hampshire, in a lecture given recently, under the part-sponsorship of the Esso Petroleum Co, called The Future of Knowledge' (re-printed in the 31 March New York Review of Books). Professor Hampshire's thoughts are a fine starting point for considering where we have go to, and where we might be going, if only because, as one might expect from such a distinguished philosopher, he gives such eloquent voice to what might be called the conventional wisdom on these matters.

He begins by claiming inspiration from his seventeenth-century predecessor as Warden of Wadham, John Wilkins, founder and first secretary of the Royal Society in 1662. Hampshire sees Wilkins's enthusiasm for the 'new science' as a symbolic landmark : 'three hundred years of accelerating understanding of nature as a rational system had begun.'

But today we are at another such turning point. In the past decade there has been 'more authoritative questioning of technology and even of the future of natural science than ever before in the last three hundred years.' Here the Professor adduces two examples, in rather strange juxtaposition: the first is that 'after two centuries we still have not come anywhere near to an exact understanding of human behaviour and of social change' ; the second is that, by

'scientific calculation,' we still cannot 'design a new town, oi even a housing development . . as a centre of pleasure In living, or as a fully human environment.

Some might say that a truly scientific attempt to understand human nature might well begin from an attempt to grasp Pre' cisely why it is that we cannot mate lullY human environments' by 'scientific cal' culation,' but let that pass.

Professor Hampshire goes on to talk about the way in which, in the past three hundred yews, scientific knowledge has become so fragmented. All very natural, he admits, but we cannot afford to let this go on indefinitely : 'The time to provide for the survival of the nation and of the species is too short.' We must learn how to resynthesise. Could we perhaps set LIP 'Supreme Academy to oversee enquirY • Oh beautiful Enlightenment thought--all Academy of Lagado, a Super-Pugwash, t° ensure that all future research should be co-ordinated for the good of mankind! One of the first aims of such an Academy would be to study human nature. It would (of course) accept that 'mathematics is the language of the intellect,' which, cooled with recent advances in linguistics search for some common basis for the studY of man) should give us 'the beginnings of a new self-understanding which could have an extensive feedback effect.' But even Professor Hampshire realise.s that this is scarcely the Panacea he .ls searching for. What about the 'social sciences,' which have let us down so badlY Alas, psychology is not much good. 'If Y°.0 want to understand states of mind and their causes ... you cannot expect to make their; the subject of an exact, experimental science unless you find their PhYslca, equivalents.' He flirts with the idea that all mental processes are 'ultimately to be, explained in terms of physics and chemistry: If only it were true! Just a few more exPerl:, ments, a little more money on research, a" bingo! We should understand Man, :the Physical and Chemical Being! We IllIghtt even be able at last to design the Idea Housing Estate for him to live in! So where is the Panacea ? Of course 'the, Academy will encourage economics. Why ' Because 'when it has confined itself to carefully abstracted aspects of huma° behaviour, economics has avoided the !.1n; certainties and vagueness of psychologic.a! explanation.' Economics, the exact social science! No messy, unpredictable human psychology round there!

because there. is history. is istoryh. iTsthoirsy irn isimpoProtr:rt Because, in our 'bored,' trivial, 'Moder–ri advanced industrial civilisation,' cut 'n from the rhythms of the seasons (and froterrid the 'beliefs, principally religious, assodia. with such rhythms'), we need an identitY,, which we derive from 'the consciousness oft a long history.' Every time a street oie building that incorporates a consider history is destroyed . . . some future halg°, ness is destroyed along with it.' So we mos'

all become conservationists, to preserve our sense of identity.

But we must also find a way forward, some pride in the monuments of the present age,' not just in architecture, but in all the arts. And here at last, Professor Hampshire leads us, almost before we notice it, into his Panacea. What has gone wrong with our culture? It has become one-sided, too rational, too technocratic. We have Missed out something vital. 'Adult reason, employed in administration and technology' must be counter-balanced. And with what? Creativity! The wonderful arts, summed up in the most revealing sentence of Hampshire's entire lecture, as 'opportunity for free imagination, for fiction, deceit, illusion, Showmanship, irresponsibility.' Oh. Ed Berman, with your street theatres, you have not lived in vain ! To revive our culture we must revive our arts. That is the Professor's final prescripti011. And how? 'By a great central push.' 'A change of attitude is needed, both in the taxpayers and in the government, towards suPporting the arts as a source of glory and as a necessity of continuing life.' The English language, finest jewel of our heritage, is sustained by those who extend its resources and refine it by their inventions, 'the Poets, dramatists and novelists of our tine' Stand up Harold Pinter, Samuel oeckett, Brigid Brophy ! You are the saviours of our culture, and Professor Hampshire thinks you should all get a huge Increase in subsidies so that you can keep us all (and our little language) refined, extended and alive. It would be hard to conceive of a more eloquent parody of the utter bankruptcy .e:t. our present conventional wisdom, than mishmash of rationalism, materialism, u_tilitarianism, and finally crazy utopianism. _Professor Hampshire's lecture is indeed the very

s_ubsid laesst gasp of the Enlightenment, as it

into total exhaustion. Such men tror Hampshire is by no means alone, but has Merely said out loud what most disliZguished minds in our culture would say if they dared to think about it) know that 'the smile of reason' has led us to a sense of spiritual iritual bankruptcy and intellectual disillusionment unique in the history of the hi uman race—but they cannot see that it is Precisely their faith in 'reason' (as they W ould define it) which has led us there. They see the 'creative' part of man (as osed to the physics and chemistry si ich may still 'explain' human nature), as „ mPlY a desire for 'fiction, deceit, illusion — iLnd not as stemming from those very _urees in his psyche which, cruelly repressed and distorted as they have been for so long, ,maY Yet lead him back to a sense of whole;'1.eiSs, integration, meaning and all the ings which the rationalists know they aove lost without knowing why. They cane°. t see that the ultimate 'illusion' is pre.isely the kind of rationalism which, as I described last week, led to the nightmare this of Le Corbusier. But for more on "us theme, see next week.