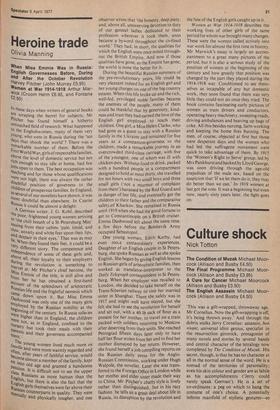 When Miss Emmie Was in Russia: English Governesses Before, During and After the October Revolution Harvey Pitcher (John Murray £5.95) Women at War 1914-1918 Arthur MarWick (Croom Helm £6.95, and Fontana £2.50) In these days when writers of general books are scraping the barrel for subjects, Mr Pitcher has found himself a hitherto untouched field of research. What happened to the Englishwomen, many of them very Y,°ung, who were in Russia during the 'ten nays that shook the world"? There was a remarkable number of them. Before the First World War, girls of respectable families, above the level of domestic service but not r.leh enough to stay idle at home, had few Jobs

teaching open to them. The best occupation was and for those whose qualifications were not high, there was always the rather doubtful position of governess to the Children of prosperous families. In England, aS sever al of our novelists have shown, it was more doubtful than elsewhere. In Czarist Russia it could be almost a delight. A German writer, J. G. Kohl, described the Poor, frightened young women arriving

insuinthe chill breath of a St Petersburg May is

, g. from their cabins 'pale, timid, and

sl°w, anxiety and white fear upon theii lips, and despair in their eyes.' That was as may be. When they found their feet, it could be a '.1erY different story. The competence and independence of some of these girls and, ,bove all, their loyalty to their employers "ring the revolution is something to .rvel at. Mr Pitcher's chief heroine, the fwliss Emmie of the title, is still alive and r°n) her he has obtained a first-hand arm

of the splendours of aristocratic

Kussian life and the frightful nemesis which ersante down upon it. But Miss Emma uashwood was only one of the many girls ekilll?loyed by the Russian nobility at the "e sinning of the century, In Russia salaries :ere higher than in England, the children flu ere not, as in England, confined to the r but took their meals with their rents and their governess accompanied them.

11.1e Young women lived much more en Jogpulle and were more warmly regarded and ,Iten, after years of faithful service, would _1'ee9e almost a member of the family, kept r into old age and granted a handsome cP.enslon. It is difficult not to see the upper ass. Russians as more human than the t.c.ngl■sh, but there is also the fact that the c,'.1g11.sh girls themselves were far above their mi‘ussian counterparts in quality. They were entail), and physically tougher, and one observer wrote that 'the honesty, deep piety, and, above all, unswerving devotion to duty of our genteel ladies dedicated to their profession wherever it took them, soon became a byword throughout the civilised world.' They had, in short, the qualities for which the English were once noted throughout the British Empire. And now if those qualities have gone, as the Empire has gone, the world is none the better for it.

During the beautiful Russian summers of the pre-revolutionary years, life could be very pleasant indeed for an English girl and her young charges on one of the big country estates. When this life broke up and the rich, well-fed, privileged noble families became the enemies of the people, many of them could be thankful that by generosity, kindness and trust they had earned the love of the English girl employed to teach their children. One girl, a Miss Helen Clarke, who had gone as a guest to stay with a Russian family in the Ukraine and remained for five years as a companion-governess to the children, made a remarkable journey in an overcrowded third-class carriage, with five of the youngest, one of whom was ill with chicken-pox. Without food or drink, packed with a hundred

People in a compartment designed to hold at most thirty. she travelled for ten hours with two small boys and three small girls ('not a murmur of complaint from them') harassed by the Red Guard and in danger of her life, and eventually got the children to their father and the comparative safety-of Kharkov, She remained in Russia until 1919 when she had the good fortune to get to Constantinople on a British cruiser. Emma Dashwood left about the same time, a few days before the Bolshevik Army occupied Sebastopol.

One young woman, Edith -Kerby, had even mot e extraordinary experiences. Daughter of an English couple in St Petersburg, she spoke Russian as well as she spoke English. She began by giving English lessons to Russian girls of aristocratic families, then worked as translator-interpreter to the Daily Telegraph correspondent in St Petersburg. When her employer was recalled to London, she decided to take herself on the Trans-Siberian railway to visit her married sister in Shanghai. There she safely was in 1917 and might well have stayed, but she felt she had to see the revolution for herself and set out, with a 40 lb sack of flour as a present for her mother, to travel on a train packed with soldiers returning to Moscow after deserting from their units. She reached

Petrograd fifteen days later only to have

half her flour stolen from her and to find her mother dismayed by her return. However,

she found herself a job compiling reports on the Russian daily press for the AngloRussian Commission, working under Hugh Walpole, the novelist. Later she was trans

ferred to the Foreign Office in London while her mother and elder sister made their way to China. Mr Pitcher's chatty style is lively rather than distinguished, but in his racy fashion he tells us

a great deal about life in Russia, its disruption by the revolution and the fate of the English girls caught up in it.

Women at War 1914-1918 describes the working lives of other girls of the same period for whom war brought many changes. These were the women called actively into war work for almost the first time in history. Mr Marwick's essay is largely an accompaniment to a great many pictures of the ,period, but it is also a serious study of the position of women at the beginning of the century and how greatly that position was changed by the part they played during the 1914-1918 war. Conditioned to see themselves as incapable of any but domestic work, they soon found that there was very little they could not do once they tried. The book contains fascinating early pictures of women as tram drivers and conductors, operating heavy machinery, sweeping roads, driving ambulances and heaving up bags of coke. All this besides nursing, farm working and keeping the home fires burning. The men, of course, objected at first but those were desperate days and the women who had led the suffragette movement v.ere quick to take advantage of them. By 1915 the 'Women's Right to Serve' group, led by Mrs Pankhurst and backed by Lloyd George, was soon driving through the age-old prejudices of the male sex, based on the suspicion that 'If we let them do it, they may do better than we can.' In 1919 women at last got the vote. It was a beginning but even now, nearly sixty years later, the fight goes on.