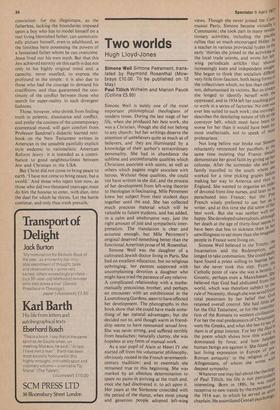 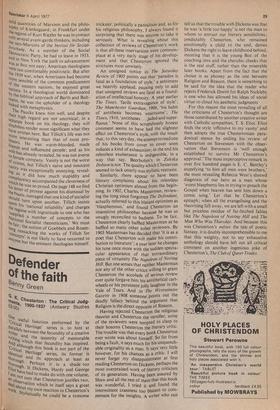 Simone Well Simone Petrement, translated by Raymond Rosenthal (Mowbrays £10.00. To be published on 12 May) Paul Tillich Wilhelm and Marion Pauck (Collins £5.95) Simone Well is surely one of the most important philosophical theologians of modern times. During the last stage of her life, when she produced her best work, she was a Christian, though she did not belong to any church; but her writings deserve the attention of unbelievers quite as much as of believers, and they are illuminated by a knowledge of their author's extraordinary personality. She had in abundance the sublime and uncomfortable qualities which Christians associate with saints, as well as others which pagans might associate with heroes. Without these qualities, she could not have written as she did; and the process of her development from left-wing theorist to theologian is fascinating. Mlle Petrement knew her subject from their student days together until the end. She has collected much precious material which will be valuable to future students, and has added, in a calm and unobtrusive way, just the right amount of just and sympathetic interpretation. The translation is clear and accurate enough, but Mlle Petrement's original deserved something better than the functional American prose of M. Rosenthal, Simone Well was the daughter of a cultivated Jewish doctor living in Paris. She had an excellent education, but no religious upbringing; her parents supported with uncomplaining devotion a daughter who might have tried the patience of any relative. A complicated relationship with a mathematically precocious brother, and perhaps an encounter with an exhibitionist in the Luxembourg Gardens, seem to have affected her development. The photographs in this book show that she could have made something of' her natural advantages; but she decided not to, and though warm in friendship seems to have renounced sexual love. She was never strong, and suffered terribly from headaches; naturally clumsy, she was hopeless at any form of manual work, As a star pupil of Alain at Henri IV she started off from his voluntarist philosophy, obviously rooted in the French seventeenthcentury tradition; and in essentials she remained true to this beginning. She was marked by an absolute determination to spare no pains in arriving at the truth and, once she had discovered it, to act upon it.. Her years at the Sorbonne coincided with the period of the slump, when most young and generous people adopted left-wing

views, Though she never S peci joined d9 At hperi lc10957. munist Party. Simone became virtuallY a Communist; she took part in many revohl' tionary activities, including the pacifisl rallies that so much encouraged Hitler. As a teacher in various provincial lycees in the; early 'thirties she joined in the activities the local trade unions, and wrote for left: wing periodicals articles that shove' increasingly keen and independent insightd' She began to think that socialisfn differe'r very little from fascism, both being forms °' the collectivism which, no less than capital' ism, dehumanised its victims. But as alwaY5 she longed to identify herself with the oppressed, and in 1934 left her teachingOst to work in a series of factories: No one vas ever less suited to such work; she movinglY describes the desolating nature of life at the conveyor belt, which must have been f3r worse for her than it would have been f0r, most intellectuals, not to speak of 111°s` proletarians. Not long before war broke out Simone reluctantly renounced her pacifism, at till' same time insisting that France shot demonstrate her good faith by giving UP her colonies. After the surrender she and her family travelled to the south where she worked for a time picking grapes bef°r,,e making her way to America and the° England. She wanted to organise an order of devoted front-line nurses, and later to be parachuted into France; but the Free French wisely preferred to use her as ar writer, and at this time she did some of he, best work. But she was neither well LW,' happy. She developed tuberculosis, alth0U10 her death at the age of thirty-four seeMs have been due less to sickness than to lied' unwillingness to eat more than she imagine people in France were living on. Simone Weil believed in the TrinitY, the Incarnation and the Redemption, all.iv longed to take communion. She could 0511,1: have found a priest willing to baptise he but she never took this step. Fronl the but point of view she was a heretic,..: Gnostic, perhaps even a Manichaean. believed that God had abdicated from tn„ world, which was therefore subject to will' rule of Necessity, though she was saved fr°0d total pessimism by her belief that G se retained overall control. She hae,i1litinstaltertiito:jutr.: tftoorhthe f Othled RToesmtaamh sento t woresftoerrhthe ci o For her the real predecessors of Christian 01 were the Greeks, and what she has to s°3', them is of great interest. For her theflit is the poem which shows how this wor less dominated by force, and how heill.,he human beings are against it. She found 're,

Whatever one may feel about the tl of Paul Tillich, his life is not particula.:de interesting. Born in 1886, he was ill%f trehceep19tilv4e twoanrewintrwehndicshbhy the exPerieric chaplain. He assimilated G-eestsaerhypesdycalisoal°r6P:;:' mild quantities of Marxism and the philos°, PhY of Kierkegaard; in Frankfurt under 1ne regime of Kurt Riezler he was in contact with several avant-garde thinkers, including the neo-Marxists of the Institut Or Sozial As a member of the Social Democratic Party, he had to leave in 1933, and in New York the path to advancement was at first not easy; American theologians wiere.too comfortably positivistic. But after the 1939 war, when Americans had become More sensible of the common predicament of the western nations, he enjoyed great s,necess. In a theological world dominated by the biblical approach of Barth and Bult;II anti, he was the upholder of a theology linked with metaphysics. The Paucks knew him well, and despite their high regard are not uncritical; in a seParate book on his theology, they will oubtless render more significant what they have written here. But Tillich's life was not more interesting than that of most proHessorsHe was warm-blooded, made "ends and influenced people; and as his Wife has already revealed, he was not averse to female company. Vanity is not the worst crimes, but Tillich's naive and innocent vanity was exceptionally annoying, reveal ing it did how much stupidity and w°,111. Placency accompanied the cleverness of -"Ich he was so proud. On page 148 we find tnilis letter of protest against his dismissal by she Nazis. outraged that one kind of socialist

ould turn upon another, Tillich insists

the his .national reliability' and charges ,e regime with ingratitude to one who has s mul3Olied a number of concepts to the b"ational Socialist theoreticians.' We must e lair; the notion of Goebbels and Rosen:78, ransacking the works of Tillich for a°rIcepts' is not likely to have occurred to "Yone but the eminent theologian himself. trickster, politically a pantaloon and, as for his religious philosophy, I always found it surprising that there was anyone to take it seriously. What is revealing about this collection of reviews of Chesterton's work is that all these reservations were commonplace at a very early stage of his development and that Chesterton ignored the strictures most unwisely. An unsigned notice in The Saturday Review of 1905 points out that 'paradox is fatal as a foundation of style,' a sentiment we heartily applaud, pausing only to add that unsigned reviews are fatal as a foundation of intellectual honesty. A year earlier The Times, 'facile extravagance of style'; The Manchester Guardian, 1906, 'his habit of antithesis becomes wearisome': The Times, 1910, 'antitheses. .. jaded and superfluous.' None of this scrupulously honest comment seems to have had the slightest effect on Chesterton's style, with the result that, to this very day, theattempt to read one of his books from cover to cover soon induces a kind of exhaustion; in the end his relentless exuberance is indigestible, in a way that say, Beerbohm's in Zuleika Dobson is not. The quality which Chesterton seemed to lack utterly was stylistic restraint. Similarly, there appear to have been literary complaints about his relentless Christian optimism almost from the beginning. In 1902, Charles Masterman, reviewing the long since forgotten The Defendant, actually referred to this blatant optimism as 'blasphemous,' and found Chesterton an insensitive philosopher because he was so smugly reconciled to badness. To be fair, Chesterton clearly baffled Master man as he baffled so many other sober reviewers. By 1903 Masterman has decided that 'it is as a poet that Chesterton will make his contribution to literature' ; a year later he changes his tune once more with the sudden spectacular appearance of that extraordinary piece of virtuosity The Napoleon of Notting Hill. But one senses that neither Masterman nor any of the other critics willing to grant Chesterton the accolade of serious review ever quite forgave him his antithetical cartwheels or his persistent jolly laughter in the Vale of Tears. And in The Westminster Gazette in 1908 someone points out the deadly fallacy behind the argument that Religion is the•direct opposite of Reason.

Having rejected Chesterton the religious theorist and Chesterton the versifier, some of the reviewers were tempted to clasp to their bosoms Chesterton the literary critic. The trouble was that every book Chesterton ever wrote was about himself. So far from being a fault, it says much for his unquenchable originality as a man. It says very little however, for his chances as a critic. I will never forget my disappointment at first reading Chesterton on Dickens, perhaps the most overpraised work of literary criticism of its generation. Having been assured by Shaw and all the rest of them that this book was wonderful, I tried it and found the intermittent crassness too blatant to compensate for the insights. A writer who can tell us that the trouble with Dickens was that he was 'a little too happy' is not the man to whom to entrust our literary sensibilities; predictably Chesterton, who remained emotionally a child to the end, denies Dickens the right to leave childhood behind, insisting that it is the young Boz of the coaching inns and the cherubic cheeks that is the real stuff, rather than the miserable later books. Apart from the fact that the choice is as phoney as the one between Religion and Reason, there is something to be said for the idea that the reader who rejects Frederick Dorrit for Ralph Nickleby is one who has allowed his ideas of social virtue to cloud his aesthetic judgments For this reason the most revealing of all the criticisms of Chesterton's thought are those contributed by another creative writer with Catholic sympathies, T. S. Eliot. Eliot finds the style 'offensive to my vanity' and then adopts the true Chestertonian paradoxical stance by ending his • review of Chesterton on Stevenson with the observation that Stevenson is 'well enough established to survive Mr Chesterton's approval.' The most imperceptive remark in over five hundred pages is E. C. Bentley's stupefying `to him all men were brothers,' the most revealing Rebecca West's shrewd diagnosis of our hero as a man whose 'worst blasphemy lies in trying to preach the Gospel when heaven has sent him down a comic song.' Let that be Chesterton's epitaph; when all the evangelising and the theorising fall away, we are left with a small but priceless residue of far-fetched fables like The Napoleon of Notting Hill and The Man Who Was Thursday. And because this was Chesterton's metier the tale of poetic fantasy, it is doubly incomprehensible to me that this weighty, not to say exhaustive anthology should have left out all critical comment on another ingenious joke of Chesterton's, The Club of Queer Trades.