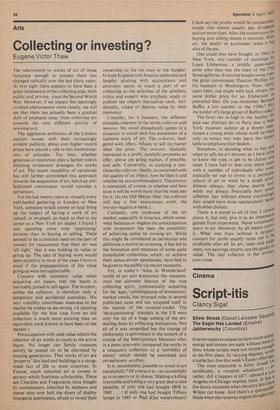 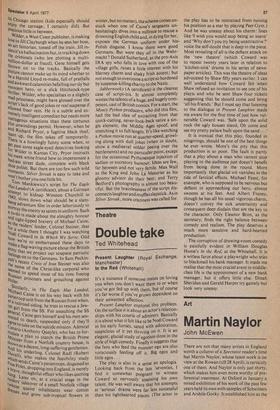 Silver Streak (Odeon Leicester square) The Eagle Has Landed (Empire) Jabberwocky (Columbia) It never ceases to amaze me how much talent' energy and money are sunk without traceIII_ fi films whose scripts were not strong enol, o.g,

The most enjoyable is Silver Streak ( r certificate), a rompish whodunnit ° rather, did it happen at all ?—aboard a5 Angeles-to-Chicago express train. It Flas e few funny moments when the story lets Wilder cut loose. And there's a spectacular° finale when the runaway engine ploughs Int its Chicago station (kids especially should eilioY the carnage; I certainly did). But Precious little in between.

Wilder, a West Coast publisher, is making love to Jill Clayburgh when he sees her boss, an art historian, tossed off the train. Jill insists it's a hallucination but, in tracking down the criminals (who are plotting a multiMillion-dollar at fraud). Gene himself gets thrown on to the tracks. Basically the Picture cannot make up its mind whether to he a Harold Lloyd re-make, full of pratfalls and awkward calamities befalling our sly but innocent hero, or a slick Hitchcock-type thriller. Wilder, who specialises in a slightly Mad prissiness, might have glossed over the script's lack of good jokes or real suspense if allowed freer rein. He is a subtle and extremely intelligent comedian but needs more outra.e 6 ous situations than these tortuous Plot unwindings permit. However, when he and Richard Pryor, a fugitive black thief, 'earn up, the film takes off temporarily. There is a howlingly funny scene when, to get Past some eagle-eyed detectives looking his Wilder in Kansas City, Pryor instructs "is meek white friend how to impersonate a bad-ass street dude, complete with black shoe polish. But there are too few such wild Plornents. Silver Streak is easy to take and won't bother you one little bit. irrom Mankiewicz's script for The Eagle nos Landed (A certificate), about a German aitteMpt to kidnap Winston Churchill in 243, slows down what should be a slamuang adventure film in order laboriously to Portray the enemy as saints in uniform. Such a te-d0 is made about the almighty honour and tight-liPped bravery of Michael Caine, ars the raiders' leader, Colonel Steiner, that N°r a while there I thought I was watching h °el Coward in In Which We Serve. Odd OW we're so embarrassed these days to make a flag-waving picture about the British farmy that we project our soupiest patriotic ,see,lings on to the Germans. In Sam Peckinrhan's recent Cross of Iron Steiner was also name of the Christ-like corporal who 7„erned to spend most of his time freeing tq.issian prisoners and grouching against Hitler.

KAiSinlilarly, in The Eagle Has Landed, :rParatroop Caine is on his way back with his atrooP unit from the Russian front when, ist. a railroad siding, he tries to rescue a Jewgirl from the SS. For assaulting the SS rneral, Caine gets himself and his men senanced to death, suspended only if they'll r.g..ree to take on the suicide mission. Admiral Ri`anaris (Anthony Quayle), who has to foru.late a plan to snatch the British Prime ;1,li inister from a Norfolk country house, is Atl°_,vvn as a decent, long-suffering gentleman. D ° his underling, Colonel Radl (Robert LIYall), who makes the feasibility study puch sends Caine's paratroops, disguised as _ ree Poles, dropping into England, is merely cijubirlave, thoughtful officer who likes quoting „_. .8. Later on, at a crucial stage in the iitsviders' takeover of a small Norfolk village d_ri°se quaint inhabitants wear cotton

'esses and grow sub-tropical flowers in winter, but no matter), the scheme comes unstuck when one of Caine's sergeants unhesitatingly dives into a millrace to rescue a drowning English child and, in dying for her, exposes the German uniform under his. Polish disguise. I know there were good Germans. But were they all in the Wehrmacht ? Donald Sutherland, as the pro-Axis IRA spy who falls in love with one of the village girls, raises a little interest with his blarney charm and shaky Irish accent; but not enough to overcome a script so burdened by suspense-killing charity to the Nazis.

Jabberwocky (A certificate) is the clearest case of script-itis. It almost completely wastes the talents of a huge, and hugely competent, cast of British comics. For a start, the Monty Python producers, who did this film, had the bad idea of extracting from that quick-cutting, never-look-back satire a single element, the Middle Ages spoof, and stretching it to full length. It's like watching a Python movie run at quarter-speed, growling along with dull jokes (when in doubt, show a mediaeval solder peeing over the battlements) and no particular point, except for the occasional Pythonesque injection of sadism or excretory humour. Ideas are few, far between and not very fertile. Max Wall as the King and John Le Mesurier as his gloomy advisor do their best; and Terry Bedford's photography is almost too beautiful. But the brainlessness of the script disconnects laughter and muffles slapstick. As in Silver Streak, more craziness was called for.