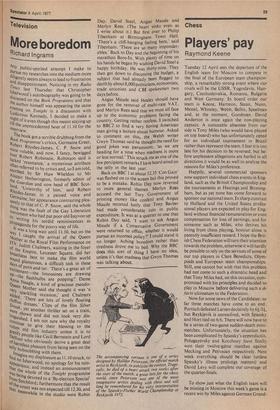 AnY public-spirited attempt 1 make to Pursue my researches into the medium more diligently seems always to lead to frustration and disappointment. Noticing in my Radio l'itnes last Thursday that Christopher Isherwood's autobiography was going to be discussed on the Book Programme and that the author himself was appearing the same evening on Tonight in a discussion with Ludicrous Kennedy, I decided to make a night of it even though this meant staying up till the unprecedented hour of 11.10 for the interview. The book got a terrible drubbing from the Book Programme's critics, Germaine Greer, Robert Rhodes-James, C. P. Snow and mine voluble, and now, I fancy, bewigged ,host Robert Robinson. Robinson said it lacked 'resonance,' a mysterious attribute often referred to by critics and, so I am told, ascribed by Sir Huw Wheldon to Mr Alistair Hetherington, formerly editor of the Guardian and now head of BBC Scot'and. 'Unworthy of him,' said Robert Rhodes Jamin a pained voice and ermaine, her appeal ance contrasting pleas,antlY to that of C. P. Snow, said the whole thing was the fault of the Gay Liberation movement who had put poor old Issyvoo up to Writing his sordid reminiscences as ""313aganda for the poovy way of life. It was a long wait until 11.10, but on the Way I caught the arrival of the Queen ivt„.,.other at the Royal Film Performance on _i„V. Judith Chalmers, waiting in the foyer the Empire, Leicester Square, did her ureathless best to make the film world sPind glamorous, a difficult task in these e'aYs of porn and tat : 'Thete's a great air of ..xeiteMent—the limousines are drawing 'AD—the flashbulbs are popping!' Dame nuna Neagle, a kind of gracious pseudov'ueen Mother said she thought it was 'a e adrY sParkling occasion,' and Chalmers eiXed: 'There are lots of lovely floating stilton dresses. Clips of the film Silver wreak, Yet another thriller set on a train, lere shown and did not look very diseliguished. I am not sure why the royalty r_untirlue to give their blessing to the gren vio film industry unless it is to r‘4,`"Y People like Cecil Bernstein and Lord n—re,if°11t who obviously derive a great deal t_'..narmless pleasure from being seen on the el:Y hobnobbing with them, firnagine my displeasure as 11.10 struck, to and no Isherwood, no apology for his nonta),ea,ranee, and instead an announcement the whole of the Tonight programme ivfls being devoted to a 'By-election Special' o

Stechford; furthermore that the result lb,` the count was not expected till 12.30, and

at meanwhile in the studio were Robin Day, David Steel, Angus Maude and Merlyn Rees. (The heart sinks even as I write about it.) But first over to Philip Tibenham at Birmingham Town Hall. 'There's a cliff-hanging feeling here,' said Tibenham. 'There are so many imponderables.' Back to Day and the beginning of his marathon Bore-In. With plenty of time on his hands he began by wishing David Steel a happy birthday. He was thirty-nine. They then got down to discussing the budget, a subject that had already been flogged to death by about 8,000 politicians,economists, trade unionists and CBI spokesmen two days before.

Angus Maude said Healey should have gone for the removal of multi-rate VAT, and Merlyn Rees said that we must all face up to the economic problems facing the country. Getting rather restless, I switched to BBC2 to find a very boring American man giving a lecture about humour. Asked to comment on this, the Welsh writer Gwyn Thomas said he thought the need for good jokes was paramount, 'as we are heading for a time when madness is more or less normal.' This struck me as one of the few percipient remarks I have heard aired on the telly in the last year.

Back on BBC 1 at about 12.35 'Con Gain' was flashed on to the screen but this proved to be a mistake. Robin Day now reverted to more general themes. Merlyn Rees accused the last Tory Government of printing money like confetti and Angus Maude retorted hotly that Tony Barber had made considerable cuts in public expenditure. It was at a quarter to one that Robin Day said, 'I want to ask Angus Maude if a Conservative Government were returned to office, whether it would pursue an incomes policy ?' I could stand it no longer. Aching boredom rather than tiredness drove me to bed. Why the BBC does this sort of thing 1 have no idea, unless it's that madness that Gwyn Thomas was talking about.